The Attack, Hold, and Release functions of a noise gate.

They are commonly used in the recording studio and sound reinforcement. Rock musicians may also use small portable units to control unwanted noise from their amplification systems. Band-limited noise gates are also used to eliminate background noise from audio recordings by eliminating frequency bands that contain only static.

Noise Gates have a Threshold control to set the level at which the gate will open. More advanced noise gates have more features. The Release sets the amount of time for the gate to go from open to fully closed. A fast release abruptly cuts off the sound once it has fallen below the threshold, a slower release smoothly changes from open to closed, much like a slow fade out. If the release time is too short a click can be heard when the gate re-opens.[citation needed] Release is the most common control to find on a gate, after Threshold. 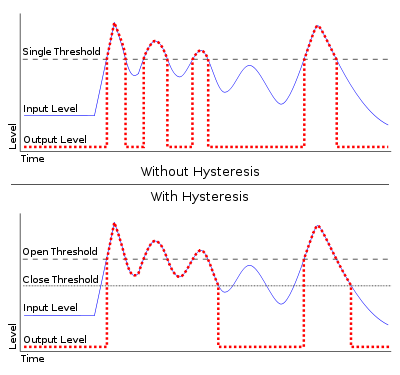 A noise gate without hysteresis can open and close undesirably with a fluctuating signal (top). With hysteresis the noise gate does not 'chatter'.

The Attack control sets the time for the gate to change from closed to open, much like a fade-in. The Hold control allows you to define the amount of time the gate will stay open after the signal falls below the threshold. This is useful during short pauses between words or sentences in a speech signal.[2]

Advanced gates have an external sidechain. This is an additional input that allows the gate to be triggered by another audio signal.

A variation of a sidechained noise gate used in electronic music production is a trancegate or just simply gate, where the noise gate is not controlled by audio signal but a preprogrammed pattern resulting in a precisely controlled chopping of a sustained sound.

Noise gates often implement hysteresis, that is, they have two thresholds. One to open the gate and another, set a few dB below, to close the gate. This means that once a signal has dropped below the close threshold, it has to rise to the open threshold for the gate to open, so that a signal that crosses over the close threshold regularly does not open the gate and cause chattering. A longer hold time as described above also helps avoid chattering.

In audio post-processing, noise gating reduces steady noise sources such as rumble from LP records, hiss from audio tape, static from a radio or amplifier, and hum from a power system, without greatly affecting the source sound. An audio signal such as music or speech is broken up into many frequency bands by a collection of overlapping band-pass filters, and if the signal amplitude in any one band is lower than a preset threshold then that band is eliminated from the final sound. This greatly reduces perceptible background noise because only the frequency components of the noise that are within the gated passbands survive.

The technique was implemented in real-time electronics in some audiophile record players as early as the 1980s[citation needed], and is now commonly used in audio production post-processing, where software to Fourier transform the audio signal can yield a very detailed spectrum of the background noise. Common digital audio editing software packages such as CoolEdit and Audacity include easy-to-use digital noise gating code: the user selects a segment of audio that contains only static, and the amplitude levels in each frequency band are used to determine the threshold levels to be applied across the signal as a whole.

Noise gating works well when the static is steady and either narrowly confined in frequency (e.g. hum from AC power) or well below the main signal level (15 dB minimum is desirable). In cases where the signal merges with the background static (for example, the brushed drum sounds in the Sun King track on the Beatles album Abbey Road) or is weak compared to the noise (as in very faint tape recordings), the noise gating can add artifacts that are more distracting than the original static.

In the context of a multi-microphone recording session, noise gating is employed to reduce the leakage of sound into a microphone from sources other than the one the microphone was intended for. One example involves the mic-ing up of a drumkit. In most multi-mic drum recordings one microphone will be used to capture the snare drum sound and another to capture the kick drum sound. The snare microphone will output a signal composed of a high level snare signal and a lower level kick drum signal (due to the further distance of the kick drum from the snare microphone). If the threshold level of the noise gate is set correctly a snare drum signal can be isolated. To fully isolate the snare drum signal the release rate has to be quite fast which can cause the tail end of the snare sound to be 'chopped off'. This can usually be remedied by the inclusion of one or more overhead microphone, which can act as a general 'audio glue' for all the other gated sources.

For vocal applications on stage an optical microphone switch may be used. An infra-red sensor senses if somebody is in front of the microphone and switches on the microphone.

A good example of time-controlled noise gating is the well-known "gated reverb" effect heard on the drums on the Phil Collins hit single "In the Air Tonight", created by engineer-producer Hugh Padgham, in which the powerful reverberation added to the drums is cut off by the noise gate after a few milliseconds, rather than being allowed to decay naturally. This can also be achieved by: sending the 'dry' snare signal to the reverb (or other process) unit, inserting a noise gate on the path of the reverb signal and connecting the snare sound to the side chain of the gate unit. With the gate unit set to 'external sidechain' (or 'external key') the gate will respond to the snare signal level and 'cut off' when that has decayed below the threshold, not the reverberated sound.

It is a common production trick to use spurious combinations of side chain inputs to control longer, more sustained sounds. For example, a hi-hat signal can be used to control a sustained synthesized sound to produce a rhythmic melodic (or harmonic) signal which is perfectly in time with the hi-hat signal. A good example of this use of the device can be found on the Godley & Creme concept album Consequences. The album's story required the creation of a number of special sound effects that would convey the impression of natural disasters. For the "Fire" sequence, Godley and Creme used a noise gate, triggered by the sound of multitracked voices, that created the 'voice' of a raging bushfire. During the recording of this segment, each time the voice signal began, it triggered the noise gate to open up another channel, which carried a pre-recorded loop of a crackling sound (created by overdubbing the sound of Bubble Wrap being popped in front of a microphone). The combined voices and crackling created an eerie and quite convincing 'talking fire' effect.