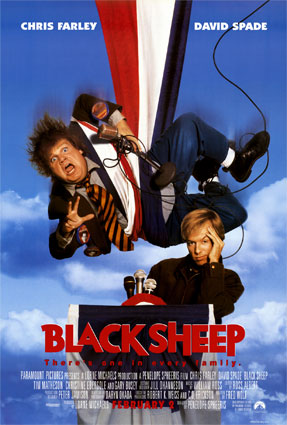 "Black Sheep" is a , directed by ("Wayne's World") and starring the comedy duo and . The film portrays a political contest in which the candidate deals with unwanted and incompetent help from his brother. Co-starring are , , and . Chris Owen and have cameo appearances, and Farley's real-life brothers and appear as thugs. The film grossed $32.3 million during its U.S. theatrical run. [ [http://www.imdb.com/title/tt0115697/business Black Sheep (1996) - Box office / business] ]

This is the last film that David Spade and Chris Farley co-starred in and is often unfavorably compared to the 1995 film "". In fact, famed film critic stated that "Black Sheep" was the first movie he ever walked out on in 25 years (Siskel stated several times that he did not like Farley and thought of him as a terrible actor). [ [http://bventertainment.go.com/tv/buenavista/ebertandroeper/index2.html?sec=6&subsec=Black+Sheep Ebert and Roeper ] ] In both films, Farley plays the lovable doofus and Spade plays his wise-cracking acquaintance. In one of his Spade in America sketches on , Spade (with the help of ) made fun of "Black Sheep", saying, "maybe you saw it the first time, when it was called ""."

Many scenes in the film were filmed in .

The film begins when Mike Donelly () is driving an advertisement truck to support his brother Al Donelly's () campaign for governor of ; his competition being incumbent Evelyn Tracy (). After Mike is chased by dogs while driving the truck, he crashes into a local movie theatre and gains great disspleasure from the local people. Al's assistant; Scott, advises Al to get rid of Mike, but Al decides to have Mike and some other guy working for him go to Garfield County and campaign for him there. In the end, the man chosen to take Mike to Garfield County is Steve Dodds (). As Steve goes to pick up Mike, he accidentally picks up a fight with a military hermit called John Savage () and ends up losing his car to Savage.

The night before Steve and Mike take off towards Garfield County, two thugs ( and ) set Mike's community center on fire, while a photographer takes incriminating pictures of Mike and Steve at the scene of the fire. However, the first cop to arrive at the scene is Nick (), a friend of Mike's who lets them off the hook. Steve gets to Mike's place, where the two take off to Garfield County in Mike's car; when they arrive at the shack where Scott told them to stay, they leave their things and start campaigning. After a few incidents (a car dragging Mike by his tie around the parking lot after he tries to help an elderly couple with their groceries; Mike accidentally kicking a man in the face while cartwheeling and Steve accidentally hitting a guy in the head with a rock) the two men return to the cabin; where they have a rough encounter with a , then a heavy wind storm tears the roof of their cabin and hail starts coming down.

The next day, Steve and Mike run out of flyers, so Steve tries to get reception to order for more; while looking for a place with reception, Steve stumbles upon the home of John Savage, an old crashed school bus with several house implements outside and inside, such as a TV, a hammock, a grill, several weapons and more. While trying to escpae from John's house without being seen, Steve accidentally loosens a rock in a pile of stones and unstables a huge boulder atop a hill overlooking their shack. After assisting a Mudhoney concert (where Mike stirred up trouble by screaming "kill whitey" while on stage), the two men start playing checkers and when Mike screams in victory after winning a match, the unstable boulder on top the hill rolls down and almost completely destroys their cabin. To try and watch a debate between Al and Governor Tracy, Steve and Mike sneak into John Savage's home and watch it on his TV, when Steve goes out for a leak, he is attacked by Savage, but is saved by Mike, who beats Savage in unarmed combat. Savage is impressed by Mike's fighting skill and befriends both men.

Governor Tracy, in hopes of sabotaging Al, posts the pictures of Mike at the community center fire, ruining Al's run and making Tracy win the election. Mike notices that the voting results are wrong, since the numbers on the vote count state that there are 1800 voters in Garfield County, when in fact there are only 1500. Mike and Steve go to the Garfield County social center, where they get the names of the voters of the county in the recent election; there, Steve discovers that over half the people who voted for Tracy were dead for over ten years, proving Tracy had rigged the elections. To get this to the people, Steve, Mike and Savage take Nick the cop's squad car and go at full speed to Seattle, where Governor Tracy is having a victory party.

At the party, the team appears during Tracy's victory speech and the police tries to arrest Mike for the of the community center for which is accused, however, Mike snatches a gun from one of the cops and pretends to hold Steve hostage, while Savage controls the crowd by threatening them with an . Mike climbs up to the podium and reveals Tracy's election fraud, overturning the election results, making Al the election winner and having Tracy arrested for fraud.

Three months later; Steve is Al's new assistant (since Al had fired his former assistant, Scott en route to the party Mike was holding hostage), Mike has got his job running the community center back and Al has improved the crime rates in Washington. As Al and Steve get into a jet to go to a meeting, Mike's tie gets caught in the jet's door and he is dragged along the air when the plane takes off and the movie ends.

* The type electoral fraud revealed at the end of the movie had dead people appearing on the voters list. This was actually used in Chicago in the mid 1900s and was also a plot point in the episode .
* This was the first film since "" to star both and , both members of the infamous Delta house.
* This is the third film featuring and , the first being "Coneheads" and the second being "".
* walked out of a theater during a screening of Black Sheep, claiming that it was the first time he walked out since the early-1970's with the film, "" and saying in an interview "I can't stand Chris Farley. Just rubs me the wrong way. I knew Jim Belushi, and he's no Jim Belushi". However, he also claimed to have walked out of the 1980 splatter film Maniac after half an hour.
* Spade is very sensitive to light. The combination of bright lights on-set and working under sunlight while filming "Black Sheep" caused permanent damage to his eyes. On his condition: "I have to wear a hat even indoors and flashes in particular freak me out. I even have to make them turn down the lights in the make-up trailers. I've become such a pain in the butt with this light-sensitive thing, it's a wonder they don't just shoot me." [ [http://jam.canoe.ca/Movies/Artists/S/Spade_David/2001/04/10/761889.html INTERVIEW: David Spade of "Dickie Roberts: Former Child Star] . "Cinema Confidential". 5 September 2003. Retrieved , .]
* Grunge band Mudhoney appeared in the movie.
* Chris Farley performed all his own stunts in the film.
* The beat-up convertible Chris Farley drives is a 1969 Pontiac Bonneville
* Two of Farley's brothers and play the security guards in the film