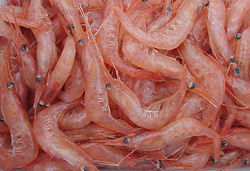 Commercial chitosan is derived from the shells of shrimp and other sea crustaceans, including Pandalus borealis, pictured here.[1]

Chitosan is produced commercially by deacetylation of chitin, which is the structural element in the exoskeleton of crustaceans (such as crabs and shrimp) and cell walls of fungi. The degree of deacetylation (%DD) can be determined by NMR spectroscopy, and the %DD in commercial chitosans ranges from 60 to 100%. On average, the molecular weight of commercially produced chitosan is between 3800 and 20,000 Daltons. A common method for the synthesis of chitosan is the deacetylation of chitin using sodium hydroxide in excess as a reagent and water as a solvent. This reaction pathway, when allowed to go to completion (complete deacetylation) yields up to 98% product.[2]

The amino group in chitosan has a pKa value of ~6.5, which leads to a protonation in acidic to neutral solution with a charge density dependent on pH and the %DA-value. This makes chitosan water soluble and a bioadhesive which readily binds to negatively charged surfaces such as mucosal membranes. Chitosan enhances the transport of polar drugs across epithelial surfaces, and is biocompatible and biodegradable. Purified quantities of chitosans are available for biomedical applications.

Agricultural and horticultural use

In agriculture, chitosan is used primarily as a natural seed treatment and plant growth enhancer, and as an ecologically friendly biopesticide substance that boosts the innate ability of plants to defend themselves against fungal infections.[4] The natural biocontrol active ingredients, chitin/chitosan, are found in the shells of crustaceans, such as lobsters, crabs, and shrimp, and many other organisms, including insects and fungi. It is one of the most abundant biodegradable materials in the world. Degraded molecules of chitin/chitosan exist in soil and water. Chitosan applications for plants and crops are regulated by the EPA, and the USDA National Organic Program regulates its use on organic certified farms and crops.[5] EPA-approved, biodegradable chitosan products are allowed for use outdoors and indoors on plants and crops grown commercially and by consumers.[6] The natural biocontrol ability of chitosan should not be confused with the effects of fertilizers or pesticides upon plants or the environment. Chitosan active biopesticides represent a new tier of cost-effective biological control of crops for agriculture and horticulture.[7] The biocontrol mode of action of chitosan elicits natural innate defense responses within plant to resist insects, pathogens, and soil-borne diseases when applied to foliage or the soil.[8] Chitosan increases photosynthesis, promotes and enhances plant growth, stimulates nutrient uptake, increases germination and sprouting, and boosts plant vigor. When used as seed treatment or seed coating on cotton, corn, seed potatoes, soybeans, sugar beets, tomatoes, wheat and many other seeds, it elicits an innate immunity response in developing roots which destroys parasitic cyst nematodes without harming beneficial nematodes and organisms.[9][10] Agricultural applications of chitosan can reduce environmental stress due to drought and soil deficiencies, strengthen seed vitality, improve stand quality, increase yields, and reduce fruit decay of vegetables, fruits and citrus crops (see photo right).[11] Horticultural applications of chitosan increases blooms and extends the life of cut flowers and Christmas trees.[12] The US Forest Service has conducted research on chitosan to control pathogens in pine trees.[13][14] and chitosan's ability to increase pine tree resin pitch outflow by 40% to resist pine beetle infestation.[15]

Chitosan has a rich history of being researched for applications in agriculture and horticulture dating back to the 1980s.[16] By 1989, Bentech Labs patented chitosan salt solutions applied to crops for improved freeze protection or to crop seed for seed priming.[17] Shortly thereafter, Bentech's chitosan salt received the first ever biopesticide label from the EPA. Numerous other chitosan patents for plants soon followed. Chitosan applications to protect plants have been used in space, as well. NASA first flew a chitosan experiment to protect adzuki beans grown aboard the space shuttle and Mir space station in 1997 (see photo left).[18] NASA results revealed chitosan induces increased growth (biomass) and pathogen resistance due to elevated levels of beta 1-3 glucanase enzymes within plant cells. NASA confirmed chitosan elicits the same effect in plants on earth.[19] Over 20 years of research and development by DuPont/ConAgra Ventures (DCV) and AgriHouse, Inc have gone into developing nontoxic, low molecular weight chitosan polymer solutions safe enough for broad-spectrum agricultural and horticultural use.[20][21] In 2008, AgriHouse, Inc, Denver (Berthoud), Colorado, was granted EPA natural broad-spectrum elicitor status for YEA! Yield Enhancing Agent, a liquid solution containing an ultralow molecular active ingredient of 0.25% chitosan.[22] YEA! is a next-generation, natural chitosan elicitor solution for agriculture and horticultural uses, and was granted an amended label for foliar and irrigation applications by the EPA in June, 2009. A milliliter of YEA! contains over 14.4 X 10¹³ bioactive, low molecular weight chitosan molecules, and it is 600 times more effective than common chitosan.[23] Given its low potential for toxicity and its abundance in the natural environment, chitosan does not harm people, pets, wildlife, or the environment when used according to label directions.[24] Agricultural chitosan facts are located on USDA and EPA web sites.[25][26]

The US Forest Service tested chitosan as an ecofriendly biopesticide, to prearm pine trees to defend themselves against mountain pine beetles.

Chitosan is also useful in other filtration situations, where one may need to remove suspended particles from a liquid. In combination with bentonite, gelatin, silica gel, isinglass, or other fining agents, it is used to clarify wine, mead, and beer. Added late in the brewing process, chitosan improves flocculation, and removes yeast cells, fruit particles, and other detritus that cause hazy wine. Chitosan combined with colloidal silica is becoming a popular fining agent for white wines, because chitosan does not require acidic tannins (found primarily in red wines) with which to flocculate.[28]

Scientists have recently developed a polyurethane coating that heals its own scratches when exposed to sunlight, offering the promise of scratch-free cars and other products. The self-healing coating uses chitosan incorporated into traditional polymer materials, such as those used in coatings on cars, to protect paint. When a scratch damages the chemical structure, the chitosan responds to ultraviolet light by forming chemical chains that begin bonding with other materials in the substance, eventually smoothing the scratch. The process can take less than an hour.[29]

Marek W. Urban, a scientist working on this project, said the polymer can only repair itself in the same spot once, and would not work after repeated scratches.[30] Whether this technology can be applied to industrial materials, however, depends on a number of factors (long-term persistence of "healability", stiffness and heat resistance of coating, knowledge of the exact mechanism of healing, etc.) not present initial studies; further investigation into these factors can potentially take decades to rectify.

Chitosan's properties allow it to rapidly clot blood, and has recently gained approval in the United States and Europe for use in bandages and other hemostatic agents. Chitosan hemostatic products have been shown in testing by the U.S. Marine Corps to quickly stop bleeding and to reduce blood loss, and result in 100% survival of otherwise lethal arterial wounds in swine.[31] Chitosan hemostatic products reduce blood loss in comparison to gauze dressings and increase patient survival.[32] Chitosan hemostatic products have been sold to the U.S. Army and are currently used by the UK military. Both the US and UK have already used the bandages on the battlefields of Iraq and Afghanistan.[33] Chitosan is hypoallergenic and has natural antibacterial properties, which further support its use in field bandages.[34]

Chitosan's properties also allow it to be used in transdermal drug delivery; it is mucoadhesive in nature, reactive (so it can be produced in many different forms), and most importantly, its positive charge under acidic conditions. This positive charge comes from protonation of its free amino groups. Lack of a positive charge means chitosan is insoluble in neutral and basic environments. However, in acidic environments, protonation of the amino groups leads to an increase in solubility. The implications of this are very important to biomedical applications. This molecule will maintain its structure in a neutral environment, but will solubilize and degrade in an acidic environment. This means chitosan can be used to transport a drug to an acidic environment, where the chitosan packaging will then degrade, releasing the drug to the desired environment. One example of this drug delivery has been the transport of insulin.[35]

Chitosan is frequently sold as tablet form at health stores as a "fat binder": It is supposed to have the capability to interact with lipids (fat) from the digestive system and limit their absorption in the body. Therefore, chitosan can be an effective complement to help lose weight during diet period or to stabilise one's weight. In the 2007 Cochrane meta-analysis,[36] which evaluated all available clinical trials performed with chitosan on the subject of weight loss, body weight and all parameters related to cholesterol changed in favor of chitosan compared to placebo. The mean difference in body weight was −1.7 kg (range: −2.1 to −1.3) in favor of chitosan, which was statistically significant. There was no difference between chitosan and placebo concerning side effects. The various qualities (in terms of duration, sample size, doses, subject characteristics, type of diet, chitosan quality and characteristics, etc.) of the clinical trials performed to evaluate the effect of chitosan on body weight might account for some of the disparities observed in clinical trial results,[37] and the subsequent critics regarding the real efficacy of chitosan. In an experimental model of the stomach and duodenum tract, chitosan has shown to interact with oil, which inhibited duodenal absorption and enhanced lipid excretion.[38] However, the mechanism of interaction between chitosan and fat is not very well understood and has not been proved clinically yet.[39] Because of this, the FDA has issued in 2004 Warning Letters to two companies who made inappropriate claims, according to the regulator.[40] Although detractors claim using chitosan may have the deleterious effect of rendering ineffective certain minerals found in foodstuffs, several animal studies contradicted this statement by showing no or little effect. In mice, dietary ingestion of chitosan did not depress the level of iron, zinc or copper.[41] Moreover, there is no proof of any adverse events, in particular regarding nutrient absorption, in humans.

Chitosan is currently the focus of much medical research, as it is a polyglucosamine (the second-most-common dietary fiber, after cellulose).[42] Studies have shown chitosan has the following properties: