The Methodist Mission was founded in Oregon Country in 1834 by the Reverend Jason Lee. The mission was started to educate the Native Americans in the Willamette Valley and grew into an important center for politics and economics in the early settlement period of Oregon.

In 1831, several Nez Perce Indians were said to have traveled to St. Louis, Missouri and met with General William Clark of the Lewis and Clark Expedition to inquire about the “white man’s God” from the General.[1] This spurred a missionary movement to convert the Native Americans to Christianity.[1] In 1834 the Methodist Church sent the Reverend Jason Lee, his nephew the Reverend Daniel Lee, Cyrus Shepard, Philip Leget Edwards, and Courtney M. Walker overland to preach to the Flathead Indians (Salish).[1] The group contracted with entrepreneur Nathaniel Jarvis Wyeth to travel overland with his party and to ship supplies around Cape Horn on Wyeth’s ship May Dacre.[1] However, Lee ignored the missionary board’s instructions and traveled to Oregon Country where he set up a mission in the Willamette Valley.[1] This came after advice from the Hudson’s Bay Company’s John McLoughlin that the Willamette Valley was a better spot than to the north where the Flathead lived.[2] The mission was 60 miles up the Willamette River from its junction with the Columbia River.[1] Here the mission built a cabin, barn, and fencing before the first winter set in.[1]

In the early years of the Mission, Lee would preach to the Catholic French Canadian settlers of the French Prairie.[2][3] He would also perform marriages and baptisms for that group as no Catholics priests were yet in the Willamette Valley.[2] This would continue until François Norbert Blanchet arrived and held the first Mass on the French Prairie on January 6, 1840.[1] 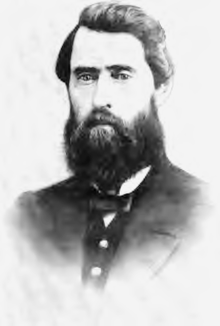 Soon after building the Mission, Lee and his men built the Indian Mission School to be used to teach the Native American children the ways of Western society.[1] Philip Edwards was the first teacher of the group which totaled around 30 students.[1] These students came from both Native tribes and from the families of the French Canadian settlers, many of whom had married Native Americans.[1] In 1835, the first class had 14 Native students, with seven dying while five ran-away from the school.[4] The following year saw 25 students, with 16 becoming sick, and only one convert for the school.[4]

In 1837, Dr. Elijah White and seven other missionaries arrived aboard the ship Hamilton to reinforce the Mission.[1] Others joining from this group include Alanson Beers and William H. Willson, and several women.[1] The women included White and Beers wives, Elvira Johnson, Susan Downing, and Anna Maria Pittman.[5] Five children also arrived with the party, with the entire group arriving in May.[5] On June 16, 1837, two marriages resulted from the new arrivals, with Cyrus Shepard marrying Susan Downing and Jason Lee marrying Anna Pittman.[5] Two more ministers, David Leslie and H. K. W. Perkins, arrived at the Mission on September 7, 1837.[5]

In March 1838, Jason Lee and Phillip Edwards left the Mission to travel back east and recruit more people for the Mission in hopes of helping to settle the Oregon Country.[5] On this journey they carried a petition signed by 29 pioneers including Ewing Young, asking the United States Congress to create a territory out of Oregon and extend its jurisdiction over the region.[5] While Lee was away, his wife died in child birth.[5] Lee also lectured along the way and on the East Coast, leading to the raising of $42,000 for the cause and 40 adults (with 50 children) to sail to Oregon and the Mission.[5] This second group came to the Mission in October 1839 aboard the ship Lausanne, which increased the number of people at the Mission to sixty.[1] This second group of reinforcements was known as the “Great Reinforcement” and had 32 men and women, along with 18 of their children.[6][7] These additional missionaries allowed the Methodist Mission to open branches at Nisqually north of the Columbia River, on the Clatsop Plains near the mouth of the Columbia, and at the falls on the Willamette River near what is now Oregon City.[8] Notable arrivals with this group included Doctor Ira L. Babcock, George Abernethy, Alvin F. Waller, Josiah Lamberson Parrish, Gustavus Hines, Lewis H. Judson, W. W. Kone, Joseph H. Frost, and J. P. Richmond.[5]

The Methodist Mission was originally located on the Willamette River at the present-day Willamette Mission State Park, in an area known as Mission Bottom.[9] At this location the missionaries built the Mission, and operated a small retail store that traded with the French Canadian settlers and the Native Americans.[10] The Mission would exchange surplus manufactured goods for items such as lumber or food stuffs.[10] In 1837, the missionaries added a large granary and hospital to the compound.[5]

Beginning in 1840, the Methodists began to move from Mission Bottom.[5] That year Jason Lee moved to the Mission Mill site in what is now Salem, while some others transferred to the Willamette Falls branch.[5] In 1841, the Indian Manual Labor School was re-located to Chemeketa near Salem.[5] The remaining buildings at Mission Bottom were sold off after Lee was replaced by George Gary in 1844.[5] With the flood in 1861, all the old mission buildings at the site were washed away except the granary and hospital.[5] 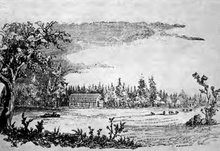 Mission at The Dalles

Jason Lee’s nephew Daniel Lee established a branch mission at The Dalles along the Columbia River.[1] Daniel Lee and H. W. Perkins established The Dalles Mission on March 22, 1836, under the direction of Jason Lee.[1] The mission there became known as Wascopam, after the Native American name for the spring water at that location.[1] Alvin Waller was transferred to this branch in 1840 from the Willamette Falls location, and the Wascopam Mission was at first successful in converting the Native Americans.[11] The mission consisted of a schoolhouse, garden, stable, barn, and two dwellings along with a cleared pasture adjacent to the wood huts used by the Native American villagers.[11] Missionaries used Pulpit Rock at the site to preach to the natives.[1]

In 1847, the Wascopam Mission was sold for $600 to Marcus Whitman, but was returned to the Methodist missionaries after the Whitman Massacre later in 1847. However, the mission was abandoned and the buildings decayed until the United States Army burned the structures after erecting Fort Dalles.[11] The federal government then paid the Methodists $24,000 for the land, but $23,000 was later paid out by the Methodists when it was shown through lawsuits that they had never obtained good title to the land.[11]

At the Willamette Falls station of the Mission, the missionaries built a storehouse to use in the trade of goods.[10] In August 1842, the main mercantile of the Mission was transferred to this location in what became Oregon City.[10] At this location George Abernethy from the Mission was placed in charge of the retail operation.[10] In 1844, the Methodist Mission ceased all secular business such as the mercantile trade at Oregon City.[10]

Joseph H. Frost and William Kone were sent to the Clatsop Plains at the mouth of the Columbia River after the arrival in May 1840 as part of the Great Reinforcement.[7] At the site the Clatsop, the local tribe, assisted the missionaries in the construction of their house.[7] The missionary outpost was unsuccessful, and Frost was unable to convert any Natives during his three years at the post.[7] In 1843, Reverend Parrish was placed in charge of the mission, replacing Frost.[5] The next year the mission was discontinued and Parrish purchased the facility from the missionary board.[5]

The mission moved to present-day Salem, near where the Mission Mill Museum is located.

Disease wiped out most of the native population in the Willamette Valley beginning in 1829. The Columbian Exchange introduced diseases that the natives had little or no immunity to, and their populations plummeted as a result. Estimates place the death toll near 90% of the Native Americans in the Lower Columbia region from the 1829 outbreak.[12]

With few natives to Christianize, it was only a matter of time before the mission had little purpose.

In Salem on January 17, 1842, at Jason Lee’s home a group of settlers met and formed the Oregon Institute as a school for the Euro-American children in the area.[5] A ten person board of trustees was created with Wallace House three miles north of Salem to serve as the school.[5] At that time the Mission was building a new three-story structure to serve as the school for the Native Americans, but with the Mission closing the building was sold to the Institute in 1844 for $4,000.[5] That year the school opened with Chloe A. Clarke Wilson as the first teacher of the first school west of the Mississippi River for Whites.[5] This school would become Willamette University in 1853.[5]