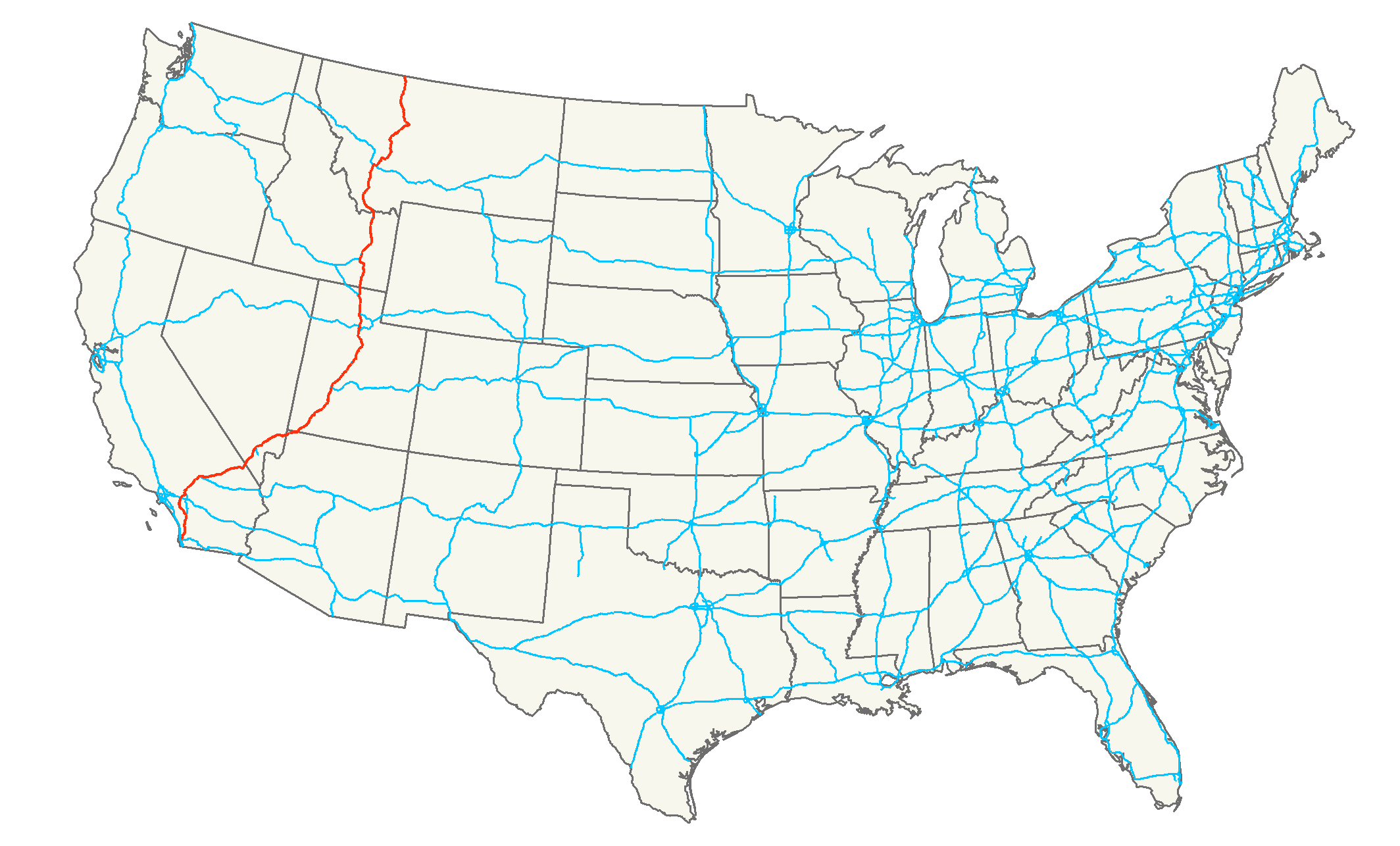 Interstate 15 (I-15) is the fourth-longest north-south transcontinental interstate highway in the , traveling through the states of , , , , , and . The Utah and Arizona portions have been officially designated the 'Veterans Memorial Highway'.

Since I-15's inception, it has served as a long-haul route for n commerce. It is now officially chartered for this purpose. From the junction of in Las Vegas to the Canadian border I-15 forms part of the , a , as a result of the .

Local portions were built to connect the Inland Empire with San Diego in California, facilitate tourism access to Las Vegas, interconnect all of the s in Utah except Logan, and provide freeway bypasses for Pocatello, Idaho Falls and Great Falls.

Since I-15's initial construction, California, Nevada, and Utah have consistently ranked in the fastest growing areas of the United States. As a result, the I-15 corridor has substantially increased in population and commuter traffic has increased the traffic burden on the freeway. Current population estimates are that more than 75 percent of Utah's population

Due to this rapid area growth, the I-15 corridor is the focus of several projects. The , system and TRAX in Salt Lake City are mass transit lines loosely parallel to I-15 that are now in operation. Between Los Angeles and Las Vegas has long been proposed as a maglev train route; in 2004 the project held public meetings on the plan. [cite web
author = Staff.
url = http://www.progressiverailroading.com/transitnews/article.asp?id=4809
title = FRA to begin environmental study for California-to-Nevada Maglev project
accessdate = 04.21.2007.]

This highway's southern terminus is in at , 18 miles (29 km) north of the international border with Mexico. However, work is being done to extend this to . The current work on this extension is signed State Route 15. There is a continuous freeway between I-8 and I-5, but various intersections and acceleration/deceleration lanes are not up to interstate standards. The northern terminus is in at the international border between the and , where it becomes .

North of its junction with the Riverside Freeway, State Route 91, in the Inland Empire near Corona, the route roughly follows the former routes of and . North of Devore, the highway follows the approximate alignment of historic along with U.S. 91 and 395. U.S. 395 breaks away at Hesperia and the route continues the approximate route of co-signed 66 and 91 until about the Mojave River, 35 miles (56 km) to the north. At that point, I-15 follows the old route of U.S. 91 exclusively. For many parts of the highway, high-voltage power lines, like and , almost all from the , follow the freeway. Many of these link distant power stations to the metropolitan area.

The starting point of Interstate 15 was originally planned to be in San Bernardino at an interchange with the San Bernardino Freeway, I-10. This was logical as I-15 was following the old alignment of the historic Route 66 which passed through San Bernardino. The segment was completed accordingly. However, legislation was later passed to extend the interstate to San Diego. But instead of extending the existing freeway from the I-10 interchange south, the made a new segment in Devore that 'branched' off of the original alignment and bypassed San Bernardino altogether. This segment's alignment is generally northeast to southwest for about 15 miles (24 km). Then, in Fontana/Rancho Cucamonga, its directional alignment shifts to north-south where it eventually junctions with Interstate 10 (about 15 miles or 24 kilometers west of the original interchange in San Bernardino). The segment that had been built from Devore to San Bernardino was retained as an interstate, but was re-numbered as Interstate 215. Note that during the construction of I-15's present alignment, and for some time afterwards, I-215 was numbered as I-15E, and its actual mileage would begin at Interstate 10.

Interstate 15 begins in Primm, continues through Las Vegas along the corridor. Then the interstate crosses the border with in Mesquite. The whole interstate in runs entirely in Clark County, for a distance of convert|123.77|mi|km.

I-15 just clips the northwestern corner of with a total length of 29.4 miles (47 km). [Arizona Department of Transportation Project 015 MO 000 H577901C, sheet 73 of 103 - revised May 2005] The stretch is separated from the rest of the state and has one major exit, at Beaver Dam/. It includes a spectacular section where the road twists between the narrow walls of the .

I-15 continues through for just over 400 miles (640 km). It is the main north-south connection for the state. The highway approximately follows the old alignment of from St. George to Brigham City. The highway passes through the fast-growing Dixie region, which includes St. George, Cedar City, and eventually most of the major cities and suburbs along the , including Provo, Orem, Sandy, West Jordan, Salt Lake City, Layton, and Ogden. Near Cove Fort, begins its journey eastward across the country. The interstate merges with I-80 for about 3 miles (5 km) from South Salt Lake to just west of and also merges with Interstate 84 from Ogden to Tremonton. Along nearly its entire length through the state, I-15 winds its way along the western edge of a nearly continuous range of mountains (the in the northern half of the state). The only exceptions are when it passes through the mountains south of Cedar City and again north of Cove Fort.

I-15 passes through for nearly 200 miles (320 km). The highway runs through Pocatello, Blackfoot, and Idaho Falls.

Interstate 15 continues onward through nearly 400 miles (640 km) of through the cities of Butte, Helena and Great Falls, intersecting with , and . At Sweetgrass, I-15 terminates upon crossing the international border into , ; however, I-15 signage is present on southbound from to the U.S.- Border.

Redesignation of SR 15 in San Diego as I-15 will eventually occur when the freeway's interchange with SR 94 is updated to . The interchange currently has left-exits and blind merges, and is due to be updated with a long-awaited widening of SR 94 in . At that time SR 15 will be resigned as part of I-15.

Listed in order from south to north:

Interstate 15 does not intersect any interstate highway in Arizona.