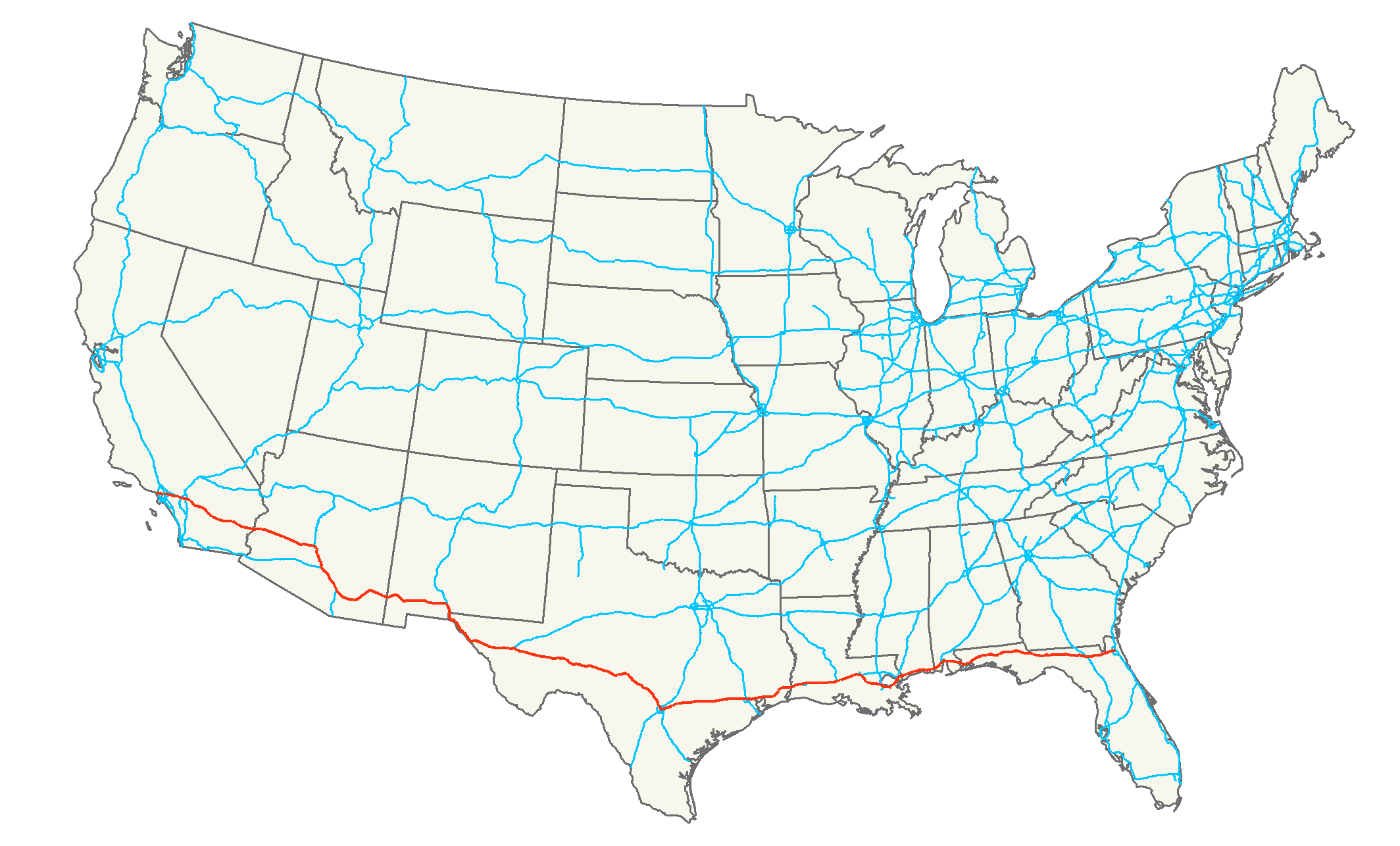 Interstate 10 (I-10) is the southernmost east-west, coast-to-coast in the . It stretches from the at State Route 1 (Pacific Coast Highway) in Santa Monica, to Interstate 95 in Jacksonville, .

Between its west terminus in Santa Monica, and the it is known as the . The is also called the " Freeway" for the segment beginning at the San Diego Freeway (The 405 Freeway) and ending at the Harbor Freeway (the 110 Freeway), however either name can be used when referring to this stretch of road. The segment between the East Los Angeles Interchange and the city of San Bernardino, California (53 miles, or 92 km, long) is known as the . Other names exist for the freeway. For example, a sign near the western terminus of the highway (in ) announces it as the Christopher Columbus Transcontinental Highway. It is known to a considerably lesser degree as the "Veterans Memorial Highway", and it is listed as a .

A stretch in Palm Springs is signed as the " Memorial Freeway" as a tribute to the late entertainer who served both as mayor and as a United States Congressman. A second stretch a short distance east in Indio is signed as the "Doctor Memorial Freeway". As a nurse with the in 1924, Dr. McCarroll was alarmed at the number of head-on traffic collisions on a nearby stretch of then-new , today known as State Route 86. She is credited with having a white stripe painted down the middle of Route 99 near to separate the two s of traffic.

In , the highway is designated the "Pearl Harbor Memorial Highway". The portion through Phoenix is named the "Papago Freeway" and is a very vital piece of the regional freeway system. This designation starts at the initial junction/southern terminus of I-17 and runs westward out to AZ Loop 101, a loop route whose current western terminus is Interstate 10.

From the southern terminus of Interstate 17 to the junction with the AZ Loop 202 freeway, the freeway is signed as the "Maricopa Freeway". This name holds true as well for I-17 from its southern terminus to its second junction with I-10, north of McDowell Road. From Loop 202 south to Interstate 8 (eastern terminus just southeast of Casa Grande), the freeway is signed as the "Pearl Harbor Memorial Highway". ADOT also has maps that show it as the Maricopa Freeway, while AAA and other sources show it as the Pima Freeway. The latter's name is used on a stretch of Loop 101 from U.S. 60 to Interstate 17.

In Tucson, I-10 is called the Casa Grande Highway from the western edge of town to the eastern terminus of Business Loop 10, where it picks up the name, Tucson-Benson Highway from that route.

In Tucson, Arizona, between I-10 mileposts 259 and 260 are interchange ramps connecting I-10 with the northern terminus of Interstate 19 at its km post 100. I-19 leads 100 km south to its termination at the US-Mexico border at Nogales, Arizona (km post 0). Note that distance measurements on Interstate 19 are signed in metric units.

Also in Tucson, all exits between Prince Road and 22nd Street will be closed from June 2007 through spring 2010. I-10 is being widened from six to eight lanes, and seven bridges and underpasses are being built to deal with congestion [http://www.i10tucsondistrict.com/Prince_29/construction.html] . Plans are also under way to widen I-10 from Marana north to the I-8 interchange at Casa Grande from 4 lanes to 6 lanes starting in the later half of 2007 and continuing into 2008 and 2009.

Interstate 10 in New Mexico follows the former path of across the state. Only three cities of significant size are located on the interstate: Lordsburg, Deming, and Las Cruces.

At Lordsburg is the western junction of and a concurrency; the two highways are joined all the way to Las Cruces. Several exits between Lordsburg and Deming are either for former towns (including Separ, Quincy, and Gage) or lack any town at all.

At Deming is the western junction of , which also forms a concurrency with I-10 all the way to El Paso. One mile north of Deming on US 180 is which serves as a short cut to north I-25 and Albuquerque.

A small portion of I-10 from Loop 1604 to downtown in San Antonio is known as the Northwest Expressway or the McDermott Freeway, while another portion from downtown to Loop 1604 East is called East Expressway or Jose Lopez Freeway.

In Houston, from the western suburb of Katy to downtown, I-10 is known as the "." This section is currently being widened to as much as 26 lanes (12 mainlanes, 4 lanes of access roads, and 4-6 mid-freeway HOT/HOV lanes, not counting access road turning lanes) [, [http://www.katyfreeway.net/images/schematics_pdf/62.pdf Schematic Layout: IH 10 Katy Frwy, IH 10 at Bunker Hill Road] ] and will be one of the widest freeways in the world. The section east of downtown Houston is officially known as the "East Freeway," although it is widely known by locals as the "Baytown East Freeway" due to a marketing push by Baytown, the easternmost principal city of the Greater Houston Area.

In Beaumont, it is designated Eastex Freeway between both splits with . Eastex is not to be confused with the designation for in Houston.

In , an 18.2-mile (29.3 km) stretch of elevated highway between Lafayette and Baton Rouge is known as the , as it goes over the and the adjacent swamps and crosses the at the . In Baton Rouge, splits off to head north of and bypass Interstate 10's long southward jog through New Orleans and reconnects with Interstate 10 at Slidell. In New Orleans, a stretch of I-10 from the I-10/I-610 split near the Orleans-Jefferson parish line to the / U.S. Route 90 Business interchange is known as the . A dip near the 10-610 interchange to go underneath a railroad track is one of the lowest points in , and is highly susceptible to flooding. Pictures of water dozens of feet deep during are commonplace. Near Slidell, the final stretch of I-10 through the state line is known as the " Memorial Highway".

I-310 and I-510 are parts of what was slated to be I-410 and act as a southern bypass of New Orleans. I-610 is a shortcut from the eastern to western portion of New Orleans avoiding the I-10's detour into New Orleans' Central Business District.

Interstate 10 in Mississippi runs from the Louisiana state line to the Alabama state line through Hancock, Harrison and Jackson counties on the Gulf Coast. It passes through the northern sections of Gulfport and Biloxi while passing just north of Pascagoula and Bay St. Louis. The highway roughly parallels .

I-10 crosses from and goes through Mobile County in Southwest Alabama. In Mobile, the highway is the southern terminus for . In downtown Mobile, I-10 goes through one of the few road tunnels in Alabama, the George C. Wallace Tunnel under the . The eastbound approach is posted at 40 mph (60 km/h) because of the sharp curve approaching the tunnel. The highway then crosses approximately eight miles of the upper part of on a bridge locals refer to as the Bayway. On the other side of Mobile Bay, the highway goes through suburban Baldwin County before crossing the into .

Most of Interstate 10 in Florida travels through some of the least-populated areas in the state, much of which is forested. Consequently, I-10 west of Interstate 295 in Jacksonville has only 4 lanes. [ [http://www.southeastroads.com/i-010e_fl.html Interstate 10 East (Jacksonville / Duval County)] . AA Roads. February 3, 2005. Last accessed November 21, 2006.] In Pensacola, an approximately convert|3|mi|km|sing=on stretch of I-10 is currently being widened to 6 lanes, which will be completed in 2008. [ [http://www.i10-i110.com/projects/1.htm Project Descriptions] FDOT, Escambia County. Last accessed November 21, 2006.] A construction project also started in Tallahassee in October 2006 to widen I-10 to six lanes. [ [http://www.movingi-10forward.com/ I-10 ::: Project Description] Moving I-10 Forward. FDOT. Last accessed November 21, 2006.]

In Jacksonville, as in Arizona, I-10 is known as Pearl Harbor Memorial Highway. Throughout much of Florida, Interstate 10 is also known as State Road 8 or State Road 8A, though it is not signed as such. [ [http://www.dot.state.fl.us/publicinformationoffice/construc/constmap/d3.htm District Three Construction] . FDOT. Updated October 19, 2006. Last accessed November 21, 2006.]

In September 2004, 's pushed up and washed out part of I-10 at the over near Pensacola, . Westbound lanes had only a couple of sections missing, while eastbound lanes were almost completely gone for a quarter-mile (400m). [ [http://www.wesh.com/news/3741143/detail.html Aerial Tour Of Panhandle Shows Devastation - Orlando News Story - WESH Orlando ] ]

In the aftermath of , the , a portion of I-10 between and Slidell spanning the eastern end of , was severely damaged, causing a break in I-10 at that point. Unlike the (east of Pensacola, and damaged by Hurricane Ivan) which is a major artery, is available to bypass New Orleans and taking I-12 to the allowed entry and exit to and from the Greater New Orleans area from the East. On October 14, 2005 at 3:00 PM, the eastbound span was reopened to two way traffic. On January 6, 2006 at 6:00 AM, both lanes of the westbound span were reopened to traffic using temporary metal trusses and road panels to replace damaged sections. [http://public.fotki.com/apjung/roadgeeking/hurricane_katrina/6/] This restored all four lanes of the I-10 twin spans for normal traffic with a 45 mph (70 km/h) speed limit for the westbound lanes and 60 mph (100 km/h) for the eastbound lanes. Oversized and overweight traffic is prohibited until a new permanent six lane span is built to replace the two temporarily repaired spans. Construction is slated to begin in mid-July 2006, with the new westbound span opening in 2008/2009 and the new eastbound span opening in 2011. [http://www.wwltv.com/local/stories/070906cckrWwlTwinSpan.41297bf1.html See WWL-TV story]

In , the twin spans crossing the Pascagoula River were opened on and are now operational, making that state's portion fully functional.

In Phoenix, a bill has been drafted that, if passed, states that the stretch of I-10 between Downtown and the suburb of Buckeye, will be widened to 24 lanes due to severe traffic problems that take place on the freeway during rush hours.

A three-year construction project is currently underway on Interstate 10 between and the in Metairie, . The $68.9 million project will add new lanes in both directions and improve the exit and entrance ramps at Causeway and Bonnabel Blvd. The state has recently completed a widening project between Causeway and Clearview Pkwy and between the I-10/I-610 split and Airline Highway ().

Florida and Alabama are currently planning a possible connector that would link with I-10. Initial plans are calling for making this new highway a toll road, and could be a reality within 5 years [ [http://www.wsfa.com/global/story.asp?s=7776794 Dothan to I-10 Connection] ] As of May 2008, it is unknown what number this new road will be assigned.

* at the in Los Angeles,