The classification of wine can be done according to various methods including, but not limited to, place of origin or appellation,[1] vinification methods and style,[2] sweetness and vintage,[3] or varietal[1] used. Practices vary in different countries and regions of origin, and many practices have varied over time. Some classifications enjoy official protection by being part of the wine law in their country of origin, while other have been created by, for example, grower's organizations without such protection.

Historically, wines have been known by names reflecting their origin, and sometimes style: Bordeaux, Rioja, Mosel and Chianti are all legally defined names reflecting the traditional wines produced in the named region. These naming conventions or "appellations" (as they are known in France) dictate not only where the grapes in a wine were grown but also which grapes went into the wine and how they were vinified. The appellation system is strongest in the European Union, but a related system, the American Viticultural Area, restricts the use of certain regional labels in America, such as Napa Valley, Santa Barbara and Willamette Valley. The AVA designations do not restrict the type of grape used.[4]

In most of the world, wine labeled Champagne must be made from grapes grown in the Champagne region of France and fermented using a certain method, based on the international trademark agreements included in the 1919 Treaty of Versailles. However, in the United States, a legal definition called semi-generic has enabled U.S. winemakers to use certain generic terms (Champagne, Hock, Sherry, etc.) if there appears next to the term the actual appellation of origin.[5]

More recently, wine regions in countries with less stringent location protection laws such as the United States and Australia have joined with well-known European wine producing regions to sign the Napa Declaration to Protect Wine Place and Origin, commonly known as the Napa Declaration on Place. This is a "declaration of joint principles stating the importance of location to wine and the need to protect place names".[6] The Declaration was signed in July 2005 by four United States winegrowing regions and three European Union winegrowing regions.

The list of signatories to the agreement expanded in March 2007 when Sonoma County, Paso Robles, Chianti Classico, Tokay, Victoria, Australia and Western Australia signed the Declaration at a ceremony in Washington, DC.

Many Regional wine classifications exist as part of tradition or appellation law. The most common of these is based on vineyard sites and include the Bordeaux Wine Official Classification of 1855, though some regions classify their wines based on the style like the German wine classification system. Vineyard classification has a long history dating from some early examples in Jurançon in the 14th century, in 1644 when the council of Würzburg ranked the city's vineyards by quality,and the early five-level designation of vineyards based on quality in Tokaj-Hegyalja in 1700.[7]

Other well known classifications include:

The follow regions are classified by vineyards, not estate.

By vinification methods and style 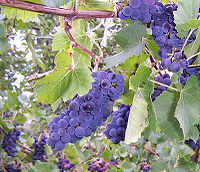 Wines may be classified by vinification methods. These include classifications such as red or white wine, sparkling, semi-sparkling or still, fortified and dessert wines. The color of wine is not determined by the juice of the grape, which is almost always clear, but rather by the presence or absence of the grape skin during fermentation. Grapes with colored juice, for example alicante bouchet, are known as teinturier. Red wine is made from red (or black) grapes, but its red color is bestowed by a process called maceration, whereby the skin is left in contact with the juice during fermentation. White wine can be made from any colour of grape as the skin is separated from the juice during fermentation. A white wine made from a very dark grape may appear pink or 'blush'. A form of Rosé is called Blanc de Noirs where the juice of red grapes are allowed contact with the skins for a very short time (usually only a couple of hours).

Sparkling wines such as champagne, contain carbon dioxide which is produced naturally from fermentation or force-injected later. To have this effect, the wine is fermented twice, once in an open container to allow the carbon dioxide to escape into the air, and a second time in a sealed container, where the gas is caught and remains in the wine.[8] Sparkling wines that gain their carbonation from the traditional method of bottle fermentation are labelled "Bottle Fermented", "Méthode Traditionelle", or "Méthode Champenoise". The latter designation was outlawed for all wines other than Champagne (which for obvious reasons does not bother to utilize it) in Europe in 1994.[9]

Dessert wines range from slightly sweet (with less than 50 g/L of sugar) to incredibly sweet wines (with over 400 g/L of sugar). Late harvest wines such as Spätlese are made from grapes harvested well after they have reached maximum ripeness. Dried grape wines, such as Recioto and Vin Santo from Italy, are made from grapes that have been partially raisined after harvesting. Botrytized wines are made from grapes infected by the mold Botrytis cinerea or noble rot. These include Sauternes from Bordeaux, numerous wines from Loire such as Bonnezeaux and Quarts de Chaume, Tokaji Aszú from Hungary, and Beerenauslese. Ice Wine is made from grapes that are harvested while they are frozen. Fortified wines are often sweeter, and generally more alcoholic wines that have had their fermentation process stopped by the addition of a spirit, such as brandy, or have had additional spirit added after fermentation.[11] Examples include Port, Madeira and Sherry.

Table wines may have an alcohol content that is no higher than 14% in the U.S.. In Europe, light wine must be within 8.5% and 14% alcohol by volume. Thus, unless a wine has more than 14% alcohol, or it has bubbles, it is a table wine or a light wine. Table wines are usually classified as "white," "red," or "rosé," depending on their colour. In Europe 'vins de table' (in French), 'vino da tavola' (in Italian), 'Tafelwein' (in German) or 'vino de mesa' (in Spanish), which translate to 'table wine' in English, are cheaper wines that often on the label do not include the information on the grape variety used or the region of origin.

Cooking wine or Cooking sherry usually refers to inexpensive grape wine or rice wine (in Chinese and other East Asian cuisine). It is intended for use as an ingredient in food rather than as a beverage. Cooking wine typically available in North America is treated with salt as a preservative and food colouring.[12]. In other countries good quality sherry wine is used for cooking, providing nice flavour to the dish and a tasty sauce [13].

When a usual wine bottle is opened and the wine is exposed to oxygen, a fermentative process will transform the alcohol into acetic acid resulting in wine vinegar. This does not happens in fortified wines, as they are already fermented. The salt in cooking wine inhibits the growth of the microorganisms that produce acetic acid. This will preserve a bottle of cooking wine, which may be opened and used occasionally over a long period of time.

Cooking wines are convenient for cooks who use wine as an ingredient for cooking only rarely. However, they are not widely used by professional chefs, as they believe the added preservative significantly lowers the quality of the wine and subsequently the food made with that wine. Most professional chefs prefer to use inexpensive but drinkable wine for cooking, and this recommendation is given in many professional cooking textbooks as well as general cookbooks. Many chefs believe there is no excuse for using a low quality cooking wine for cooking when there are quality drinkable wines available at very low prices.

Cooking wine is considered a wine of such poor quality, that it is unpalatable by itself and intended for use only in cooking. There is a school of thought that advises against cooking with any wine one would find unacceptable to drink.[14]

By vintage or varietal

A vintage wine is one made from grapes that were all, or primarily, grown in a single specified year, and are accordingly dated as such. Consequently, it is not uncommon for wine enthusiasts and traders to save bottles of an especially good vintage wine for future consumption. However, there is some disagreement and research about the significance of vintage year to wine quality.[15] Most countries allow a vintage wine to include a portion of wine that is not from the labeled vintage.[citation needed]

A varietal wine is wine made from a dominant grape such as a Chardonnay or a Cabernet Sauvignon. The wine may not be entirely of that one grape and varietal labeling laws differ. In the United States a wine needs to be composed of at least 75% of a particular grape to be labeled as a varietal wine.[16] In the European Union, a minimum of 85% is required if the name of a single varietal is diplayed, and if two or more varietals are mentioned, these varietals combined must make up 100% and they must be listed in descending order. E.g., a mixture of 70% Chardonnay and 30% Viognier must be called Chardonnay-Viognier rather than Viognier-Chardonnay.