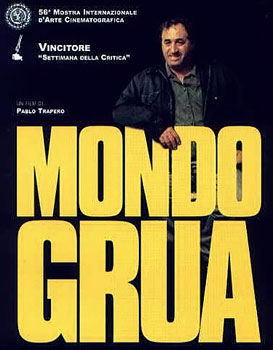 The movie was partly funded by Argentina's .

The picture is about working class life in Argentina that's gritty (filmed in sepia, black and white). The film follows the fortunes in the life of Rulo, an unemployed suburban man, who tries to earn a living as a crane operator in Buenos Aires.

The film tells of Rulo (), a moderately successful musician in the 1970s.

Today he's divorced and an unemployed forty-something day-laborer living in in the late 1990s. He's anxious for whatever work he can find. He lives with his son who's also musically inclined, and his mother ().

His best friend Torres (), who has connections in the Argentine construction industry, finds him work as a large crane operator.

Rulo is dating Adriana (), who runs a sandwich shop.

He lands a job as an excavating machine operator in distant . The workers live in a remote farmhouse and the relationship between management and labor is difficult.

One day the workers are not fed during lunch so they refuse to work until they eat. Rulo soon discovers that making a fresh start at a late age proves to be harder than he first thought.

Pablo Trapero, in neo-realist fashion, used extras and bit players when he filmed.

The picture was screened at various film festivals, including: the , , ; the , ; the Fribourg Film Festival, ; the , Argentina; the New Directors/New Films, ; and others.

Film critic Stephen Holden, film critic for "", liked the look and tone of the film and wrote, " [the picture] is a stylistic throwback to 1940s Italian neo-realism. The movie's grainy, sepia-toned cinematography and low-key naturalistic performances by a cast of nonprofessionals enhance its slice-of-life authenticity." [ [http://movies2.nytimes.com/mem/movies/review.html?_r=1&title1=Crane%20World%20%28Movie%29%20%20&title2=&reviewer=STEPHEN%20HOLDEN&pdate=20000403&v_id=181829&oref=slogin Holden, Stephen] . "The New York Times," "An Unemployed Guy Who Won't Follow Doctor's Orders," , 2000.]

Film critic Diego Lerer, a member of , wrote an extensive essay about director Pablo Trapero's cinema films. He reviewed "Mundo grúa" favorably and believes Trapero's film is advancing the "New Argentina Cinema Wave" and his films continues to break away from the older Argentine storytelling. He wrote, "Trapero's film dared to break even freer from the classic narrative models. Even though the film has a story, and one that advances with utter efficiency, "Crane World" respects the characters' internal rhythm like none of the other films by young Argentines had done so far...In Trapero's film, the scenes are developed in all their length." [ [http://www.fipresci.org/world_cinema/south/south_english_argentinean_cinema_pablo_trapero.htm Lerer, Lerer] . , "Cinemas of the South: Pablo Trapero: Family Pictures," 2006.]