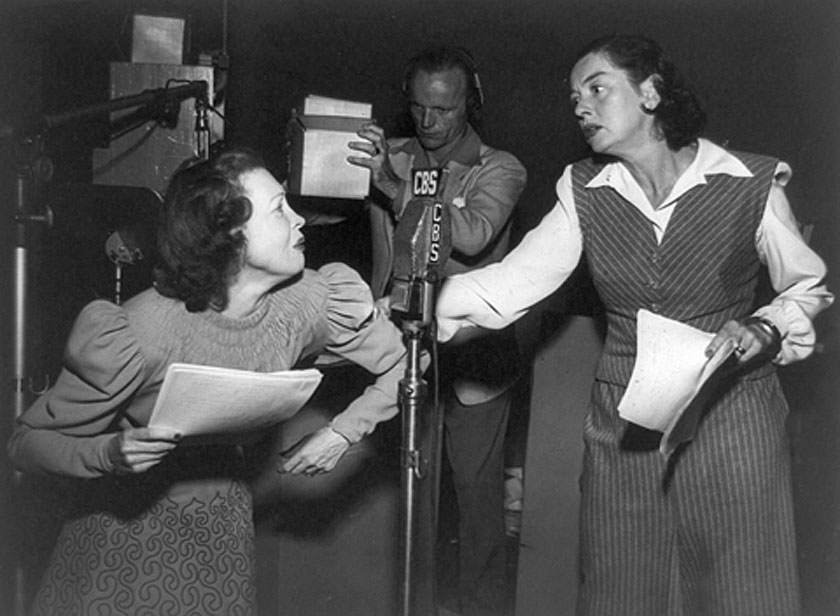 One of the premier drama programs of the Golden Age of Radio, was subtitled "radio's outstanding theater of thrills," and focussed on -type scripts, usually featuring leading Hollywood actors of the era. Approximately 945 episodes were broadcast during its long run, and more than 900 are extant in mostly high-quality recordings

"Suspense" went through several major phases, characterized by different hosts, sponsors and director/producers. There were a few rules which were followed for all but a handful of episodes: the protagonist was usually a normal person suddenly dropped into a threatening or bizarre situation; solutions were "withheld until the last possible second"; and evildoers were punished in the end. The program made only occasional forays into and . Among its science fiction entries were "The Man who Tried to Save Lincoln" (a fantasy) and an adaptation of 's "", as well as an adaptation of an short story, "".

directed its audition show (for the CBS series "Forecast"). This was an adaptation of "The Lodger," [http://gaslight.mtroyal.ab.ca/lodger.htm] a story Hitchcock had filmed in 1926 with . , author of "Suspense: Twenty Years of Thrills and Chills", described the "Forecast" origin of "Suspense"::On the second presentation of , , "Forecast" offered a mystery/horror show titled "Suspense". With the co-operation of his producer , Alfred Hitchcock received the honor of directing his first radio show for the American public. The condition agreed upon for Hitchcock's appearance was that CBS make a pitch to the listening audience about his and Wanger's latest film, "Foreign Correspondent". To add some flavour to the deal, Wanger threw in and as part of the package. All three men (including Hitch) would be seen in the upcoming film, which was due for a theatrical release the next month. Both Marshall and Hitchcock decided on the same story to bring to the airwaves, which happened to be a favorite of both of them: ' "The Lodger." had filmed this story for Gainsborough in 1926, and since then it had remained as one of his favorites.

:Herbert Marshall portrayed the mysterious lodger, and co-starring with him were Edmund Gwenn and character actress Lurene Tuttle as the rooming-house keepers who start to suspect that their new boarder might be the notorious Jack-the-Ripper. [Gwenn was actually repeating the role taken in the 1926 film by his brother, Arthur Chesney. And Tuttle would work again with Hitchcock nearly 20 years later, playing Mrs. Al Chambers in "Psycho".] Character actor also had a small part in the drama, and , head musician for CBS Radio at the time, composed and conducted the music specially for the program. Adapting the script to radio was not a great technical challenge for Hitchcock, and he cleverly decided to hold back the ending of the story from the listening audience in order to keep them in suspense themselves. This way, if the audience's curiosity got the better of them, they would write in to the network to find out whether the mysterious lodger was in fact Jack the Ripper. For the next few weeks, hundreds of letters came in from faithful listeners asking how the story ended. Actually a few wrote threats claiming that it was "indecent" and "immoral" to present such a production without giving the solution.

In the early phase, the program was hosted by "The Man in Black" (played by Joseph Kearns or Ted Osborne) and many episodes written or adapted by the prominent mystery author . "Escape" was a similar anthology thriller and suspense program. The two series occasionally adapted the same stories, though "Escape" had lower budgets — and thus fewer name actors.

The sponsor became Roma Wines and then Autolite Spark Plugs; eventually Harlow Wilcox (of "") became the pitchman. William Spier, William N. Robson, and Anton M. Leader were among the producers and directors.The program's heyday was in the early 1950s, when radio actor, producer and director Elliott Lewis took over (still during the Wilcox/Autolite run). Here the material reached new levels of sophistication. The writing was taut, and the casting, which had always been a strong point of the series (featuring such film stars as , , , , and ), took an unexpected turn when Lewis expanded the repertory to include many of radio's famous drama and comedy stars — often playing against type — such as and Jim and Marian Jordan of "" in an episode entitled "Backseat Driver" which originally aired on February 3, 1949.

The highest production values enhanced "Suspense", and many of the shows retain their power to grip, entertain and move. At the time he took over "Suspense," Lewis was familiar to radio fans for playing Frankie Remley, the wastrel guitar-playing sidekick to in "". On the , "Suspense", Lewis reversed the roles with "Death on My Hands": A bandleader (Harris) is horrified when an autograph-seeking fan accidentally shoots herself and dies in his hotel room, and a vocalist (Faye) tries to help him as the townfolk call for vigilante justice against him.

Another noteworthy episode was "The Hitch Hiker," in which a character played by is stalked on a cross-country drive by a nondescript man who keeps appearing on the side of the road. This episode originally aired on , . [ [http://www.otrcat.com/suspense-p-1882.html OtrCAT] ]

The single most popular episode of "Suspense" is 's "Sorry, Wrong Number," about a bedridden woman () who panics after overhearing a murder plot on a crossed telephone connection but is unable to persuade anyone to investigate. First broadcast on , , it was restaged seven times (last on , ) &mdash; each time with Moorehead. The popularity of the episode led to a film adaptation, "" (1948), starring . Nominated for an for her performance, Stanwyck recreated the role on "". had the lead in the TV movie "Sorry, Wrong Number" (1989).

There were several variations of show openings. A typical early opening is this from , ::(MUSIC ... BERNARD HERRMANN'S SUSPENSE THEME ... CONTINUES IN BG)

:THE MAN IN BLACK: Suspense!

:This is The Man in Black, here again to introduce Columbia's program, "Suspense".

:Our stars tonight are Miss Agnes Moorehead and Mr. Ray Collins. You've seen these two expert and resourceful players in "Citizen Kane" - "The Magnificent Ambersons" in which Miss Moorehead's performance won her the 1942 Film Critics' Award. Mr. Collins will soon be seen in the Metro-Goldwyn-Mayer Technicolor film, "Salute to the Marines."

:Miss Moorehead and Mr. Collins return this evening to their first love, the CBS microphone, to appear in a study in terror by Lucille Fletcher called "The Diary of Sophronia Winters."

:The story told by this diary is tonight's tale of... suspense. If you've been with us on these Tuesday nights, you will know that Suspense is compounded of mystery and suspicion and dangerous adventure. In this series are tales calculated to intrigue you, to stir your nerves, to offer you a precarious situation and then withhold the solution... until the last possible moment. And so it is with the story "The Diary of Sophronia Winters" and the performances of Agnes Moorehead and Ray Collins, we again hope to keep you in...

The familiar opening phrase "tales calculated to..." was satirized by "Mad" as the cover blurb "Tales Calculated to Drive You... "Mad" on its first issue (October-November 1952) and continuing until issue #23 (May 1955).