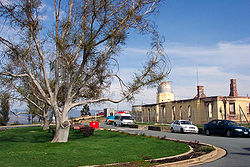 Remains of the dome of the 50-inch Great Melbourne telescope 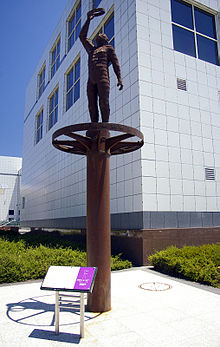 Statue of an astronomer and the concept of the cosmic distance ladder, created by scientist and artist Tim Wetherell, made from the azimuth ring and other parts of the Yale-Columbia Refractor (telescope) (c 1925) wrecked by the 2003 Canberra bushfires which burned out the Mount Stromlo Observatory; at Questacon, Canberra, Australian Capital Territory.

Mount Stromlo Observatory (MSO) located just outside of Canberra, Australia, is part of the Research School of Astronomy and Astrophysics at the Australian National University (ANU).

The observatory was established in 1924 as The Commonwealth Solar Observatory. The Mount Stromlo site had already been used for observations in the previous decade, a small observatory being established there by Pietro Baracchi using the Oddie telescope being located there in 1911.[1] The dome built to house the Oddie telescope was the first Commonwealth building constructed in the newly established Australian Capital Territory. Until World War II, the observatory specialised in solar and atmospheric observations. During the war the workshops contributed to the war effort by producing gun sights, and other optical equipment. After the war, the observatory shifted direction to stellar and galactic astronomy and was renamed The Commonwealth Observatory.

The ANU was established in 1946 in nearby Canberra and joint staff appointments and graduate studies were almost immediately undertaken. A formal amalgamation took place in 1957 with Mount Stromlo Observatory becoming part of the ANU.

On January 18, 2003 the devastating Canberra firestorm hit Mount Stromlo (which was surrounded by a plantation pine forest) destroying five telescopes, workshops, seven homes and the heritage listed administration building. The only telescope to escape the fires was the 1868 15-centimetre Farnham telescope. Relics from the fire are preserved in the collection of the National Museum of Australia. They include a melted telescope mirror and a piece of melted optical glass (flint). The latter has pieces of charcoal and wire fused into it from the fierce heat of the fire.[2]

Redevelopment is largely completed and the Observatory is now a major partner in the construction of the Giant Magellan Telescope.[3] The current observatory director is Harvey Raymond Butcher.[4]

The MACHO project detected the first instance of the gravitational lensing of one star by another, known as Gravitational microlensing, in 1993 (Alcock et al. 1993; Paczynski 1996). This discovery was made by repeated imaging of the Magellanic Clouds with the refurbished 50-inch Great Melbourne Telescope which was equipped with a mosaic of 8 2048 by 2048 pixel CCDs. The camera was constructed by the Centre for Particle Astrophysics in California (CFPA), and at the time was the largest digital camera ever built (Frame & Faulkner 2003). Observations began in July 1992 and the project concluded in December 1999. In total, the MACHO project made over 200 billion stellar measurements, with the data processed both at the observatory and at the Lawrence Livermore National Laboratory.

Brian Schmidt organised an international collaboration, known as the High-z Supernova Search Team, to study the rate of change of the Cosmic Expansion using type Ia supernovae. In 1998, the team reach the conclusion that the cosmic expansion was accelerating, contrary to expectations. This universal acceleration implies the existence of dark energy and was named the top science breakthrough of 1998 by Science magazine.[5] In 2011, Brian P. Schmidt shared the Nobel Prize in Physics with Saul Perlmutter and Adam Riess for such observations which provided evidence for the accelerating Universe.

The 2dF Galaxy Redshift Survey, co-led by Matthew Colless, undertook the largest galaxy redshift survey of its time, and was conducted at the Anglo-Australian Observatory (AAO) with the 3.9m Anglo-Australian Telescope between 1997 and 11 April 2002.[6] In total, the survey measured more than 245,000 galaxies, providing, along with the Sloan Digital Sky Survey, the definitive measurements of large scale structure in the low-redshift Universe.

The instrumentation group at Mount Stromlo Observatory has built two instruments for the Gemini Telescope. This includes the near infrared integral field spectrometer, NIFS, deployed on Gemini-North, and the adaptive optics imager for Gemini-South, GSAOI. NIFS, when nearly completed, was destroyed in the bushfires of 18 January 2003, and rebuilt.

A new rapid survey telescope, SkyMapper, is under construction. SkyMapper will reside at the ANU's other observatory (Siding Spring) and operated remotely from Mount Stromlo. 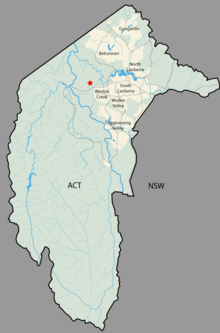 Mount Stromlo Observatory is located at an altitude of 770 metres above sea level on Mount Stromlo. Situated west of the centre of Canberra, near the district of Weston Creek. Canberra's main water supply treatment plant is located nearby.