The Chūō-Sōbu Line (中央・総武緩行線, Chūō-Sōbu-kankō-sen?) is a railway line located in Tokyo and Chiba Prefecture, Japan. Part of the East Japan Railway Company (JR East) network, it runs on separate tracks along the right-of-way of the Chūō Main Line (Chūō Line (Rapid)) and Sōbu Main Line (Sōbu Line (Rapid)), providing service between Mitaka Station in the cities of Mitaka and Musashino and Chiba Station in Chiba.

Women-only cars, designed to prevent chikan, were introduced on this line during morning peak periods starting on November 20, 2006. 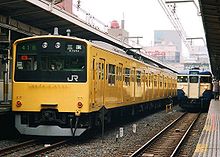 Trains used on the Chūō-Sōbu Line are based at Mitaka Depot.

Rolling stock used in the past