Mount Eden
For other places with the same name, see Mount Eden (disambiguation).

Mount Eden (Maungawhau, the 'Mountain of the Whau tree' in Māori) is the name of a cinder cone and surrounding suburb in Auckland City, New Zealand, situated five kilometres south of the city centre. The mountain is the highest natural point in the whole of Auckland. The English name honours George Eden, 1st Earl of Auckland. 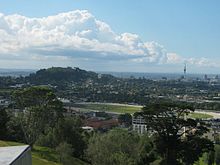 Mount Eden (to the left of the picture, beyond Alexandra Park) from One Tree Hill

Terraces on the southern slopes of Mount Eden

Mount Eden as seen through the city buildings, from Northcote.

Looking into and over the Mount Eden crater.

The central focus of the suburb is the dormant eponymous volcano whose summit (196 metres above sea level) is the highest natural point on the Auckland isthmus. The majestic bowl-like crater is 50 metres deep. The volcano erupted from two craters 28,000 years ago, with the last eruptions from the southern crater filling the northern crater.[1][2]

Mt Eden sees strong tourism use, as it is the highest non-manmade point in Auckland, and provides good views in all directions over the city. The large numbers of coach buses, which previously could go all the way to a parking lot on the top of the hill has been considered to have degraded the top of the cone. In August 2006, a ban on tour buses was announced. They will have to park halfway up the mountain in the future. However, this has in the meantime been partly qualified, with the vehicle ban only to be enforced when a "sustainable, low-impact transport system" (not further specified) is in place. [3]

In pre-European times Mount Eden was utilised as a fortified hill pa by various Māori tribes.[4] Its occupation ended in 1700 A.D when the Waiohua defeated the Tamaki people. The earth ramparts and terraces from this period contribute to the distinctive outline of the hill today.

From the 1950s the peak was used by the NZPO for VHF radio communications in two buildings, several hundred metres apart, each with their own antenna farm. One building housed transmitting equipment, while the other housed receiving equipment. In the 1960s the site was staffed during the five-day working week due to the large number of valves that wore out under the stress of high power and needed frequent servicing. Typical use of the facility was for businesses eg taxi or delivery firms needing mobile communications to vehicles; taxis, trucks or vans.

Some of the craters have been made the site of water reservoirs from as early as 1877.

Every year on 22nd February, known as "Thinking Day" Rangers from Mona Burgin's Unit set off before dawn, while it is still dark, and they climb to the top of Mount Eden. There they set up their little campfire and a flag-staff, and as the sun rises over the sea they raise the Guide World Flag, they sing the World Song, and they speak of some of the people and the countries they are Thinking about - and so they start "The Big Think" which then travels all the way round the world.[citation needed]

The area directly around the hill consists of very fertile free-draining soil mixed with a great deal of volcanic debris in the form of scoria rocks. When Europeans came to the area, they found a landscape devoid of large trees, as anything of any size had been cut down by the Maori for various uses, such as the timber palisades of the pa. The land was covered with bracken, flax and Manuka trees, with whau shrubs growing on the hill. The Europeans cleared the land of the scoria rocks and made fences with them to define property boundaries. This resulted in a landscape reminiscent of Ireland or the Scottish lowlands. These scoria walls are still a feature of the suburb today.

Initially the land was utilised for farms, but from quite early on the area hosted country residences of professionals and business people from Auckland. Most of the farm land was subdivided into large suburban plots between 1870 and 1875, and the principal roads were formed by the Crown. Mt Eden's first school opened in 1877 on the corner of Mt Eden and Valley roads. In 1879 the mountain was officially protected as a public reserve. The tea kiosk on the slope of Mt Eden was built in 1927.

Mt Eden is now a "leafy suburb" of predominantly large houses from the first half of the 20th century. The gardens are verdant and the trees have grown large. On the eastern slopes of Mt Eden were constructed several large country houses set in palatial grounds. These included "Harewood House" (now the site of the Mater Hospital), Justice Gillies "Rocklands Hall" (now a hostel), Alfred Buckland's "Highwic" (now a museum), the Hellaby family's "Florence Court", and Josiah Clifton Firth's "Clifton House" (both still private residences). Close by the current Government House (residence of the Governor General) is Eden Gardens, a botanical garden set up in a disused quarry.

In the 1950s and 1960s the inner suburbs became unfashionable and the old houses of the Mt Eden area were comparatively cheap to buy. Mt Eden developed a slightly bohemian image during this time as a community of artists, writers, teachers and university lecturers made it their home. Mt Eden village is still regarded by many as the "Home Of Arts" in Auckland, due to the large amount of creative activity in and around the suburb and the large number of artists who live nearby.

The Presbyterian Boys' Hostel at 22 View Road is a historic building that became the first home for many young men, who moved to Auckland to train in government and industry at low rates of pay.

Eden Park has been home to Auckland Cricket since 1910, and also hosts international test and one-day cricket matches. The ground has also been the home of the Auckland Rugby Union since 1925.

There are several prestigious schools located in and around Mt Eden including St Peter's College, Epsom Girls Grammar School and Auckland Grammar School, as well as the Epsom Campus of the University of Auckland (previously the Auckland College of Education).

There are three War Memorials in the Mount Eden area;

To many New Zealanders the name Mount Eden is linked with Mount Eden Prison, which was built in a castle style between 1882 and 1917. It is constructed out of the local basalt rock, one of the very few buildings built in this uncompromising material. Built with prison labour it was designed by P.F.M. Burrows and is similar in appearance to Dartmoor Prison in England.

In 1868 local people met to form a local governing body; this was the Mt Eden Highway Board. The Mt Eden Borough Council came into being in 1906. The Council Office buildings in Valley Road were built in 1911. In 1989 Mt Eden Borough was amalgamated with Auckland City.