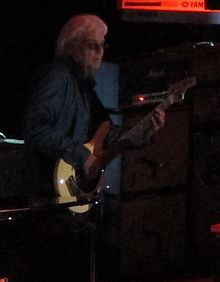 Cliff Hugo was born in the USA, April 23rd 1951, in Southern California, where he also spent his early days. He plays bass guitar for the art-rock band Supertramp, but also has another joint venture with Supertramp's guitarist Carl Verheyen and plays in his project - Carl Verheyen Band. In addition, he is recognized as a session musician for other musical projects and artists, like Rick Braun, Mike Love, Paul Williams, etc. Straight after graduating from college he was invited to play with Ray Charles both on tour and in studio (Oh What a Beautiful Morning is a noticeable piece of this collaboration). One of Cliff Hugo's hobbies is perpetual travelling and he is also known for his distinctive taste of the world music.