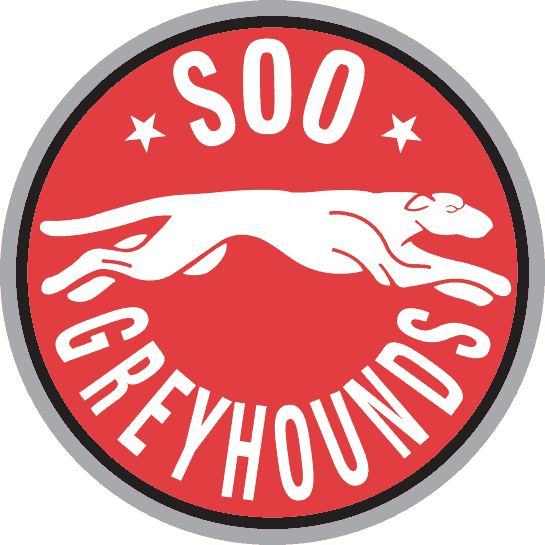 city =
league =
conference = Western
division = West
founded = (NOHA Jr. A)
(OHA)
arena =
colours = , , and
coach =
GM =
affiliates = The Sault Ste. Marie Greyhounds (aka Soo Greyhounds) are a major team in the . The Greyhounds play home games at the . The present team was founded in 1962 as a team in the Northern Ontario Hockey Association. The Greyhounds name has been used by several teams based in since 1919.

The first Greyhounds team formed in 1919, playing in the now defunct Upper-Peninsula League. The team's coach was George MacNamara. He suggested the team be called the Greyhounds since, "a greyhound is much faster than a wolf." That reference was to the already established rival club, the Sudbury Wolves.

The senior Greyhounds folded in 1927, and were replaced the following season by a junior team of the same name, competing in the . The juniors won the league championship four consecutive years from 1928 to 1931, and a fifth title in 1942. Junior hockey in Sault Ste. Marie came to an abrupt end in 1945 when the was destroyed by fire.

The senior Greyhounds team was revived in 1948. The new team played out of a temporary home at Pullar Stadium until the Memorial Gardens opened in 1949. The senior Greyhounds won the NOHA championship four times in 1950, 1951, 1952 and 1955. This team folded, along with the league after the 1958-59 season.

The current Greyhounds Junior A franchise was founded in 1962 as a member of the . The team's founders were Angelo Bumbacco, Lloyd Prokop, Phil Suraci, Pat Esposito and Dr. Bill Kelly. The Greyhounds played for ten seasons in the NOJHL. They were extremely successful, never having a losing season, and winning the league championship three times. In 1972, the Greyhounds entered the Ontario Hockey Association as a Major Junior A expansion team. The original directors were joined by Frank Caputo and Frank Sarlo.

Gretzky requested to wear # 9 for his idol , but that number was already taken by linemate Brian Gualazzi. Gretzky then chose # 19 instead. After a few games, coach Muzz MacPherson suggested wearing two nines would be better than one. From that season on, Gretzky has always worn the legendary # 99.

In 63 games that year, he set the Greyhounds all-time record, scoring 70 goals and had 112 assists for a total of 182 points. Gretzky would have won the scoring title, except for a 192 point season by Bobby Smith. Gretzky was awarded the as the rookie of the year, and the as most gentlemanly player.

The Terry Crisp years as coach

The year after Gretzky departed, the Greyhounds hired to coach. Under his guidance, the Greyhounds would win three division titles, finish first place overall three times, and win the league championship his final season.

In his second year at the helm, the Soo won its first Leyden division title, posting 47 wins, and winning its first as best in the league. The Greyhounds lost to the Kitchener Rangers in the league finals, 9 points to 3. It was the first of five consecutive seasons that the Greyhounds and the Rangers would meet in the playoffs. Next season, the Greyhounds switched to the Emms Division, but would lose out to Kitchener in the semi-finals.

Crisp's team would win its new division in 1983, and finish first overall in the OHL for the second time. This time in the playoffs, they would eliminate the Rangers in the semi-finals, ultimately losing to the in the finals, a team which would become a future rival. Despite a rebuilding year in 1983-84, the Soo reached the semi-finals again, but fell to their rival Kitchener.

The would be historical for Sault Ste. Marie. The Greyhounds won their third Hamilton Spectator Trophy in 5 years, and second Emms division title. The Greyhounds also set a record, winning all 33 of their home games that season, a record that still stands. The same year, the Greyhounds set the OHL record for 109 points in a season that stood for 19 years. In the playoffs, the Soo eliminated rival Kitchener in four straight games in the first round. After a second round bye, the Greyhounds beat out the 9 points to 1 to reach the finals again. Sault Ste. Marie won its first , defeating the 9 points to 5.

After winning the OHL championship, the Greyhounds travelled to to compete in the tournament, for the national junior hockey title. The Greyhounds played against the host team , the QMJHL champion , and the WHL champion .

The Greyhounds were led by future NHLers, , , , , and . Leading scorers in the regular season were Wayne Groulx, Graeme Bonar and Sault Ste. Marie native Mike Oliverio.

The Greyhounds won the first game on in Shawinigan versus the home team, by a score 4-3, in front of 3,276 fans. Televising games from the in Shawinigan proved difficult due to roof support pillars around the ice surface. After two games in Shawinigan, the remainder of the tournament was played in the in .

The Greyhounds won their first game in Drummondville 6-3 over Verdun, with two goals from Derek King. Their first loss of the tournament came in game three, losing 8-6 to the Prince Albert Raiders. With the loss, the Cataractes, Raiders and Greyhounds would all finish the round-robin with two wins and a loss. Shawinigan earned a spot in the finals on best goals for and against difference, with Sault Ste. Marie and Prince Albert to have a rematch in the semi-final game. On , the Greyhounds lost again to the Raiders.

In the 1992-93, the Greyhounds won their third consecutive Emms division title. They narrowly beat out the by having more wins in the regular season despite both teams earning 81 points. The OHL revived the idea of a Super Series from six years previous to determine which team would host the Memorial Cup of 1993. The Greyhounds assured themselves of a third consecutive trip to the Memorial Cup, by sweeping the series versus the Leyden division champion . Jarrett Reid led Sault Ste. Marie in scoring through the playoffs, with 19 goals and 16 assists in 18 games.

After the Super Series ended, the regular playoffs started. Sault Ste. Marie earned the first round bye, then defeated the and the Junior Red Wings to reach the finals against the Petes. This time, the Petes prevailed 4 games to 1, spoiling the Greyhounds chances of a third consecutive J. Ross Robertson Cup. Joing the Greyhounds and Petes in the Memorial Cup would be the WHL champion and the QMJHL champion .

The Greyhounds and the Petes both finished the Memorial Cup round-robin with two wins and a loss. Sault Ste. Marie earned a berth in the finals by having beaten the Petes in the round robin. The two teams would meet again in the tournament finals, playing in front a hometown crowd of 4,757 spectators at the Memorial Gardens on . Sault Ste. Marie led 3-0 after the first period, and held on to win their first Memorial Championship, beating the Petes 4-2. The victory party continued on Queen St. late into the evening.

The Greyhounds colours are predominantly red and white. Black and silver trim were added in the late 1980s, as well as four stars above the logo. Sault Ste. Marie has used their classic red circle logo with the running greyhound for all but four seasons of their existence.

From 1995 to 1999 the Greyhounds redesigned their logo (inset right), to what became known by fans as the "Ugly Dog" or "Snoopy" logo. Due to public backlash and a fan petition for its removal, the team discontinued its use and went back to the classic logo.

The first home of the Greyhounds from 1919 to 1945 was . The arena had wooden benches for 1,000 spectators. It was destroyed by fire in 1945. An outdoor rink at Pullar Stadium was used until a new indoor facility was built.

The Greyhounds played home games at the from 1949 to 2006. The building was named for the s of . The Gardens hosted games in 1978 and 1993, and the OHL All-Star Game in 1979. The last game at the Gardens was played on Tuesday, , . Demolition of the Gardens began on , . All that remains of the Gardens is the Memorial Tower, which is part of "Memorial Square". The red beacon of the Memorial Tower was preserved and continues to be lit on game days.
* [http://www.ohlarenaguide.com/hounds.htm Sault Memorial Gardens] - The OHL Arena & Travel Guide

The Greyhounds moved to the new for the . The new arena was built in the east parking lot of the Memorial Gardens, and is the largest such centre in . Its were purchased by of . The inaugural game was played on , , resulting in a 2-1 loss to the . The 2008 OHL All-Star Classic was held at the Essar Centre during the 2007-2008 season.
* [http://www.ohlarenaguide.com/greyhounds.htm Essar Centre] - The OHL Arena & Travel Guide