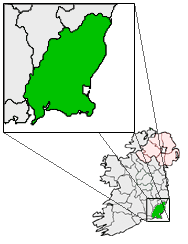 Fethard-on-Sea ("Fiodh Ard" in Irish), or Fethard, is a situated in south-west , on the eastern side of the base of the .

Now known as a fishing village and holiday resort, in past times Fethard was a place of some importance. It was the site of Norman landings in the , and the remains of Norman-era earthworks and fortifications [ [http://www.southeastireland.com/content.asp?id=109] ] may be seen at Baginbun Bay, south of Ingard Point.

A 12th-century castle was built by Raymond le Gros, which passed to the and was used as an episcopal residence. There is little evidence of the castle today. "Alexander Devereux" (the 16th century bishop of Ferns and Abbot of Dunbrody) is buried in St Mogue's Church (Church of Ireland)

Fethard was granted a charter by James I, and became a municipal borough, sending 2 members to the Irish parliament, before its dissolution. In 1798 a harbour was built and was a landing site for French troops during the revolutionary wars.

In modern times the main industries have been fishing and tourism. The village has a population of 253. It lies in the electoral district of Fethard in the constituency of . It is bordered by the districts of and Ballyhack.

A parish in the Catholic diocese of Ferns, Fethard is bordered by the parishes of Templetown and Poulfur.

In May , Fethard-on-Sea found itself embroiled in controversy related to the "" decree. A priest, Father Stafford and his parishioners started a of -owned local businesses; a Protestant music teacher lost 12 of her 13 pupils, and the Catholic teacher of the local Protestant school was forced to resign. [ [http://www.nationalarchives.ie/search/index.php?browse=true&category=1&subcategory=9&offset=18440&browseresults=true] National Archives press clippings] The boycott was in response to the actions of a Protestant woman, Sheila Kelly Cloney. Mrs. Cloney had left both her Catholic husband, Sean Cloney, and the village, taking her two daughters, rather than sending them to the local National (Catholic) School as Father Stafford demanded. The boycott received national and international coverage through the summer (some TDs regarded this as a case of kidnapping), [ [http://www.gov.ie/oireachtas/archives/launch.htm#Fethard-on-Sea%20boycott Remarks by Professor Brian Farrell at the Launch of the Parliamentary Archive on the Internet on 5 July 2001 ] ] before ending that autumn.

In , the 's bishop publicly apologised for the boycott.

A movie, "" (1999) was made about the Cloney family, starring Irish actress as Sheila Cloney. [ [http://www.cinemaguild.com/LoveDivided.pdf A Love Divided ] ] The film itself also proved to be controversial, with allegations of fabrications and historical misrepresentation, [ [http://findarticles.com/p/articles/mi_qn4161/is_19991205/ai_n14497602 LOVE CONQUERS ALL; But for decades a village paid the price of | Sunday Mirror | Find Articles at BNET.com ] ] [ [http://findarticles.com/p/articles/mi_qn4158/is_19991022/ai_n14282062 Obituary: Sean Cloney | Independent, The (London) | Find Articles at BNET.com ] ] [ [http://www.nationalarchives.ie/search/index.php?browse=true&category=1&subcategory=9&offset=18440&browseresults=true National archives Finding aid: Women in 20th-Century Ireland, 1922-1966 (Browse records) ] ] and the omission of important facts relating to the case. [ [http://www.mayonews.ie/index.php?option=com_content&task=view&id=1639&Itemid=38 The Mayo News - Fethard boycott recalled ] ] [ [http://www.time.com/time/magazine/article/0,9171,809747,00.html?iid=chix-sphere Fethardism - TIME ] ] Press criticism in Ireland focused on one of the movie's writers, Gerry Gregg, a and former member of ,