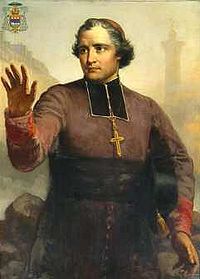 He was educated for the priesthood at Saint-Sulpice, where in 1818 he became professor of dogmatic theology. After filling a number of ecclesiastical offices, he was elevated to the archbishopric of Paris in 1840. Though opposed to the government of Louis-Philippe, he took no part in politics, but devoted himself to his pastoral work. His episcopate, however, is chiefly remembered owing to its tragic close. During the insurrection of June 1848 the archbishop was led to believe that by his personal interference peace might be restored between the soldiery and the insurgents. Accordingly, in spite of the warning of General Cavaignac, he mounted the barricade at the entrance to the Faubourg Saint-Antoine, bearing a green branch as sign of peace. He had spoken only a few words, however, when the insurgents, hearing some shots, and fancying they were betrayed, opened fire upon the national guard, and the archbishop fell, struck by a stray bullet. He was removed to his palace, where he died on 27 June.

Next day the National Assembly issued a decree expressing their great sorrow on account of his death; and the public funeral on 7 July was one of the most striking spectacles of its kind.

The archbishop wrote several treatises of considerable value, including an Essai sur les hieroglyphes egyptiens (Paris, 1834), in which he showed that Champollion's system was insufficient to explain the hieroglyphics.