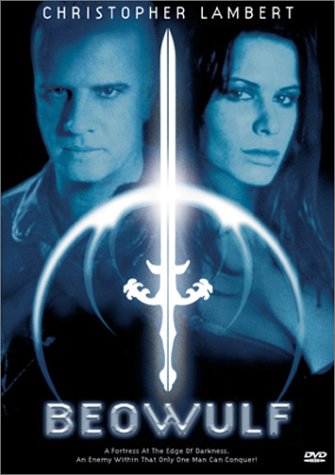 "Beowulf" is a 1999 film loosely based on the Anglo-Saxon epic poem of the same name. Unlike most film adaptations of the poem, this version is a / film that, according to one film critic, "takes place in a post-apocalyptic, techno-feudal future that owes more to "" than "Beowulf."

While the film remains fairly true to the story of the original poem, other plot elements deviate from the original poem (Hrothgar has an affair with , and they have a child together, ; Hrothgar's wife commits ).

Beowulf is a powerful warrior. He goes to a castle which is haunted by a demon, Grendel, who is slowly killing its entire population. The castle is surrounded by soldiers who will not let anyone in or out, but Beowulf fights his way through. Beowulf then states he intends to kill the demon. , who is king of the castle, welcomes his help.

Hrothgar has a daughter named Kyra. Another important character is Roland who is probably the strongest soldier of the castle. Roland is in love with Kyra, but she does not love him back. It also becomes clear once Hrothgar had a wife who committed suicide after Hrothgar had an affair with another woman. This woman was an ancient being who originally lived on the location where the castle is now. They had a child, Grendel.

Beowulf and Grendel fight and they wound each other, but both recover.

Later Beowulf and Grendel fight again. Beowulf cuts Grendel's arm off with a retracting . After this the castle celebrates, as they believe Grendel has been slain. Kyra declares her love for Beowulf and he returns her affection.Kyra tells him that she killed her previous husband after he treated her badly. Beowulf tells her that his mother is human and his father is , "God of darkness, Lord of lies". This explains his tremendous fighting prowess.

While Kyra is with Beowulf all the other people in the castle are killed by Grendel's mother (and possibly Grendel). Beowulf kills Grendel by stabbing him and then kills his mother by stabbing her and cutting a fire vent placed in front of her, causing flames to engulf her and consume the castle. Beowulf escapes the falling castle with Kyra. The castle is destroyed, with Beowulf and Kyra the only survivors.

Critical reaction to the film has been mixed. Danél Griffin of Film as Art said the film "understands that liberties must be taken with the poem's characters to create a more cinematic experience, and there are moments that, even in its liberties, it reveals a deep appreciation for the poem, and a profound understanding of its ideas. There are other moments, however, that seem so absurd and outlandish that we wonder if the writers, Mark Leahy and David Chappe, have even read the poem." Griffin added that "Lambert is certainly effective," but concluded that "clever ideas aside, the film is unfortunately mediocre at best. The set design and some of the revised storyline are both stupendous, but the overall experience makes for poor cinema."

Beyond Hollywood's review said that "genre films don’t get any sillier than [this] ", but called the film "above average." The review praised the film's "energetic action" and said that it "excels in set design," but added that "the techno [music] is pretty annoying." [ [http://www.beyondhollywood.com/beowulf-1999-movie-review/ "Beowulf" (1999) review] , Beyond Hollywood, February 11, 2005] Calling the film "a cheesy post-apocalyptic update of the ancient tale," Carlo Cavagna of About Film praised the film's action scenes but felt that Lambert and Mitra had no chemistry. [ [http://www.aboutfilm.com/movies/b/beowulf.htm "Beowulf" (1999) review] , Carlo Cavagna, About Film]

Nathan Shumate of Cold Fusion Video Reviews also praised the film's action scenes, but felt it used used all its good ideas in the first half, "leaving most of the rest of the movie to die of attrition." Shumate added, "That’s not to say that there are no effective scenes to be had, [but they] certainly can’t carry the full 90-minute running time." [...] Perhaps it’s truly impossible to come up with a definitive film version of this epic. But I wouldn’t want to make a judgement on that simply due to this attempt’s mediocrity. [ [http://www.coldfusionvideo.com/archives/beowulf-1999/ "Beowulf" (1999) review] , Nathan Shumate, Cold Fusion Video Reviews, November 23, 2000]