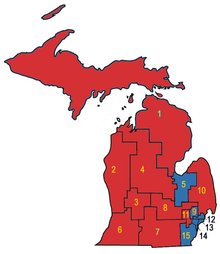 Michigan currently has 15 congressional districts. It used to have as many as 19. Before statehood, Michigan Territory was represented by a non-voting delegate. The delegation to the 112th Congress is as follows: