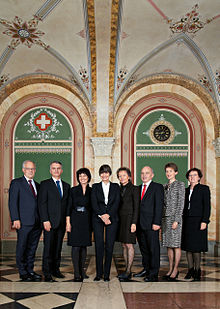 The Swiss Federal Council in 2011

This is a list of members of the Swiss Federal Council (German: Schweizerischer Bundesrat; French: Conseil fédéral suisse; Italian: Consiglio federale svizzero; Romansh: Cussegl federal svizzer). The Council's seven members constitute the federal government of Switzerland and serve as the country's head of state. Each of the seven Councillors heads a department of the Swiss federal administration.[1]

The members of the Federal Council are elected for a term of four years by both chambers of the federal parliament sitting together as the Federal Assembly. Each Councillor is elected individually by secret ballot by an absolute majority of votes. A person elected to the Council by the Federal Assembly is considered a Federal Councillor even if he or she declines the election.[2] Accordingly, the five persons who did so and never assumed office are listed in a separate table below. For the same reason, the principal table only records the date of election, and not the date on which the Councillors assumed their office.

Once elected for a four-year-term, Federal Councillors can neither be voted out of office by a motion of no confidence nor can they be impeached. Re-election is possible for an indefinite number of terms. Parliament has decided not to re-elect a sitting Councillor only four times, and only twice (in 2003 and 2007) since the beginning of the 20th century. In practice, therefore, Councillors serve until they decide to resign and retire to private life, usually after three to five terms of office.[3]

The Councillors currently serving are indicated with bold type.

Members who declined their election