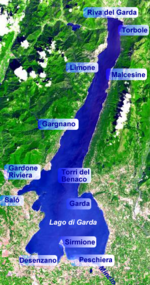 Map of Lake Garda showing the position of Desenzano.

Desenzano del Garda is a town and comune in the province of Brescia, in Lombardy, Italy, which borders Lake Garda. It is bordered by other communes of Castiglione delle Stiviere, Lonato, Padenghe sul Garda and Sirmione.

Starting from the 1st century BC, the area of the Garda, including what is now Desenzano del Garda, became a favourite resort for rich families coming from Verona, then the main Roman city in north-eastern Italy.

The city is a popular holiday destination in Southern Europe. It attracts a myriad of tourists from around the immediate area due to its beautiful view of the Alps on the southern shore of Lake Garda, its three large beaches (Desanzanino Beach, Spiagga D'oro Beach, and Porto Rivoltella Beach) and its 27 major hotels. Desenzano is the heart of night life of southern Garda Lake with several discos and pubs. In the summertime its main squares, "piazza Malvezzi" and "piazza Matteotti" are crowded all night by young and partying people.

At the heart of the city is a series of interconnected piazze that house numerous open-air cafés, various shops, "gelaterie" (ice-cream parlors) and several bars.

The city has one main port near the Piazza Giacomo Matteotti which operates several ferries around the lake. Also, at the southwestern outskirts of the city is a large train station, the Desenzano del Garda-Sirmione railway station ('Stazione Ferroviaria'), which connects the city to the European railway system. As well as this Desenzano has its own exit from the A4 motorway, the main road between Milan and Venice.

It is home to one or more prehistoric pile-dwelling (or stilt house) settlements that are part of the Prehistoric Pile dwellings around the Alps UNESCO World Heritage Site.[1]