Dakar Department is one of the departments of Senegal, located in the Dakar Region.

The département of Dakar is one of the four départements of the Dakar région, which is one of the 11 régions of Senegal. The Dakar région encompasses the city of Dakar and all its suburbs along the Cape Verde Peninsula. Its territory is thus roughly the same as the territory of the metropolitan area of Dakar. Since the administrative reforms of 1996, the régions of Senegal, which until then were merely local administrative structures of the central state, have been turned into full-fledged political units, with democratically elected regional councils, and regional presidents. They were given extensive powers, and manage economic development, transportation, or environmental protection issues at the regional level, thus coordinating the actions of the communes below them. 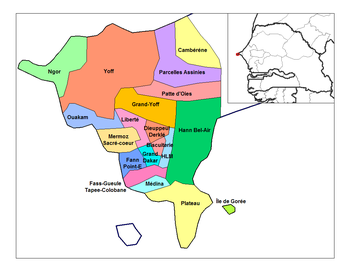 In 1996, a massive reform of the administrative and political divisions of Senegal was voted by the Parliament of Senegal. The commune of Dakar, whose population approached 1 million inhabitants, was deemed too large and too populated to be properly managed by a central municipality, and so on August 30, 1996 Dakar was divided into 19 communes d'arrondissement.