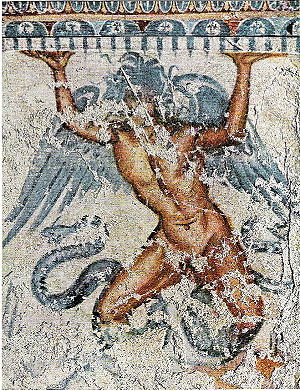 Etruscan mural of the God Typhon, from Tarquinia. 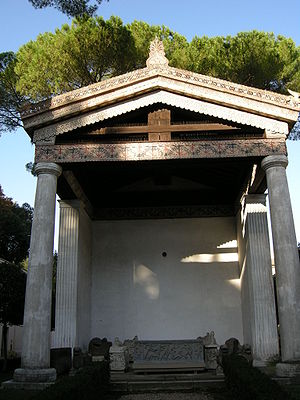 Reconstruction of an Etruscan temple, Museo di Villa Giulia, Rome. It is heavily influenced by studies of the Temple of Apollo at Portonaccio (Veio)

The Etruscans were a diachronically continuous population, with a distinct language and culture during the period of earliest European writing, in the Mediterranean Iron Age in the second half of the first millennium BC. They ranged over the Po Valley and some of its alpine slopes, southward along the west coast of Italy, most intensely in Etruria with enclaves as far south as Campania, and inland into the Appennine mountains. Their prehistory can be traced with certainty to about 1000 BC. At their height about 500 BC, they were a significant maritime power with a presence in Sardinia and the Aegean Sea.

At first influential in the formation and conduct of the Roman monarchy, they fought a series of wars with the Roman Republic, and were conquered and integrated into Roman culture. Much of Etruscan religion and mythology became part of classical Roman culture, including the Roman pantheon. The Senate adopted key elements of their religion, which were perpetuated by haruspices and noble Roman families who claimed Etruscan descent, long after the general population had forgotten the language.

In the last years of the Roman Republic the religion began to fall out of favor and was satirized by such notable public figures as Marcus Tullius Cicero. The Julio-Claudians, especially Claudius, who claimed a remote Etruscan descent, maintained a knowledge of the language and religion for a short time longer, but this practise soon ceased. A number of canonical works in the Etruscan language survived until the middle of the 1st millennium AD but were destroyed by the ravages of time and by Christian elements in Roman society.

The Etruscan system of belief was an immanent polytheism; that is, all visible phenomena were considered to be manifestations of divine power, and that power was embodied in deities who acted continually on the world but could be dissuaded or persuaded by mortal men.

Long after the assimilation of the Etruscans, Seneca the Younger said[1] that the difference between the Romans and the Etruscans was that

Whereas we believe lightning to be released as a result of the collision of clouds, they believe that the clouds collide so as to release lightning: for as they attribute all to deity, they are led to believe not that things have a meaning insofar as they occur, but rather that they occur because they must have a meaning.

Around the mun or muni, or tombs[citation needed], were the man or mani (Latin Manes), the souls of the ancestors. In iconography after the 5th century BC, the deceased are shown traveling to the underworld.[2] In several instances of Etruscan art, such as in the François Tomb in Vulci, a spirit of the dead is identified by the term hinthial, literally "(one who is) underneath".

A god was called an ais (later eis), which in the plural is aisar. The abode of a god was a fanu or luth, a sacred place, such as a favi, a grave or temple. There, one would need to make a fler (plural flerchva), or "offering".

Three layers of deities are portrayed in Etruscan art. One appears to be lesser divinities of an indigenous origin: Catha and Usil, the sun, Tivr, the moon, Selvans, a civil god, Turan, the goddess of love, Laran, the god of war, Leinth, the goddess of death, Maris, Thalna, Turms and the god Fufluns, whose name is related in some unknown way to the city of Populonia and the populus Romanus.

Ruling over them were higher deities that seem to reflect the Indo-European system: Tin or Tinia, the sky, Uni his wife (Juno), and Cel, the earth goddess.

The Etruscans believed their religion had been revealed to them by seers,[4] the two main ones being Tages, a child-like figure born from tilled land who was immediately gifted with prescience, and Vegoia, a female figure.

The Etruscans believed in intimate contact with divinity.[5] They did nothing without proper consultation with the gods and signs from them.[6] These practices were taken over in total by the Romans.

The Etruscan scriptures were a corpus of texts termed the Etrusca Disciplina. This name appears in Valerius Maximus[7], and Marcus Tullius Cicero refers to a disciplina in his writings on the subject.

Massimo Pallottino summarizes the known (but non-extant) scriptures as the Libri Haruspicini, containing the theory and rules of divination from animal entrails; the Libri Fulgurales, describing divination from lightning strikes; and the Libri Rituales. The last was composed of the Libri Fatales, detailing the religiously correct methods of founding cities and shrines, draining fields, formulating laws and ordinances, measuring space and dividing time; the Libri Acherontici, dealing with the hereafter; and the Libri Ostentaria, containing rules for interpreting prodigies. The revelations of the prophet Tages were given in the Libri Tagetici, which included the Libri Haruspicini and the Acherontici, and those of the prophetess Vegoia in the Libri Vegoici, which included the Libri Fulgurales and part of the Libri Rituales.[8]

These works did not present prophecies or scriptures in the ordinary sense: the Etrusca Disciplina foretold nothing itself. The Etruscans appear to have had no systematic ethics or religion and no great visions. Instead they concentrated on the problem of the will of the gods: if the gods created the universe and man and have a will and a plan for everyone and everything in it, why did they not devise a system for communicating that will in a clear manner?

The Etruscans accepted the inscrutability of their gods' wills. They did not attempt to rationalize or explain divine actions or formulate any doctrines of the gods' intentions. As answer to the problem of ascertaining the divine will, they developed an elaborate system of divination; that is, they believed the gods offer a perpetual stream of signs in the phenomena of daily life, which if read rightly can direct man's affairs. These revelations may not be otherwise understandable and may not be pleasant or easy, but are perilous to doubt.

The Etrusca Disciplina therefore was mainly a set of rules for the conduct of all sorts of divination; Pallottino calls it a religious and political "constitution": it does not dictate what laws shall be made or how men are to behave, but rather elaborates rules for asking the gods these questions and receiving answers.

For a hasty acceptance of an erroneous opinion is discreditable in any case, and especially so in an inquiry as to how much weight should be given to auspices, to sacred rites, and to religious observances; for we run the risk of committing a crime against the gods if we disregard them, or of becoming involved in old women's superstition if we approve them.

He then quipped, regarding divination from the singing of frogs:

Who could suppose that frogs had this foresight? And yet they do have by nature some faculty of premonition, clear enough of itself, but too dark for human comprehension. 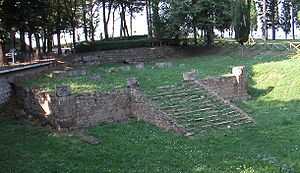 Divinatory inquiries according to discipline were conducted by priests whom the Romans called haruspices or sacerdotes; Tarquinii had a college of 60 of them.[8] The Etruscans, as evidenced by the inscriptions, used several words: capen (Sabine cupencus), maru (Umbrian maron-), eisnev, hatrencu (priestess). They called the art of haruspicy zich nethsrac.

A special magistrate, the cechase, looked after the cecha or rath, sacred things. Every man, however, had his religious responsibilities, which were expressed in an alumnathe or slecaches, a sacred society. No public event was conducted without the netsvis, the haruspex, or his female equivalent, the nethsra, who would read the bumps on the liver of a properly sacrificed sheep. We have a model of a liver made of bronze, whose religious significance is still a matter of heated debate, marked into sections which perhaps are meant to explain what a bump in that region would mean. Divination through haruspicy is a tradition originating from the Fertile Crescent.[5]

Etruscan beliefs concerning the hereafter appear to be an amalgam of influences. The Etruscans shared general early Mediterranean beliefs, such as the Egyptian belief that survival and prosperity in the hereafter depend on the treatment of the deceased's remains.[10] Etruscan tombs imitated domestic structures and were characterized by spacious chambers, wall paintings and grave furniture. In the tomb, especially on the sarcophagus (examples shown below), was a representation of the deceased in his or her prime, often with a spouse. Not everyone had a sarcophagus; sometimes the deceased was laid out on a stone bench. As the Etruscans practiced mixed inhumation and cremation rites (the proportion depending on the period), cremated ashes and bones might be put into an urn in the shapes of a house or a representation of the deceased.

In addition to the world still influenced by terrestrial affairs was a transmigrational world beyond the grave, patterned after the Greek Hades[citation needed]. It was ruled by Vanth, and the deceased was guided there by Charun, the equivalent of Death, who was blue and wielded a hammer. The Etruscan Hades was populated by Greek mythological figures and a few such as Tuchulcha, of composite appearance.

The mythology is evidenced by a number of sources in different media; for example, representations on large numbers of pottery, inscriptions and engraved scenes on the Praenestine cistae (ornate boxes; see under Etruscan language) and on specula (ornate hand mirrors). Currently some two dozen fascicles of the Corpus Speculorum Etruscorum have been published. Specifically Etruscan mythological and cult figures appear in the Lexicon Iconographicum Mythologiae Classicae.[11] Etruscan inscriptions have recently been given a more authoritative presentation by Helmut Rix, Etruskische Texte.[12]