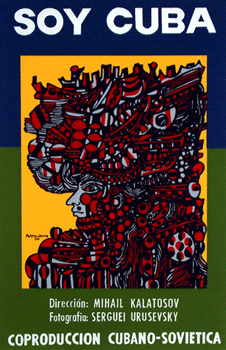 Shortly after the 1959 overthrew the dictatorship of , the socialist Castro government, isolated by the after the latter broke diplomatic and trade relations in 1961, turned to the for film partnerships. The Soviet government, interested in promoting international , agreed to finance a film about the Cuban revolution.

The director was given considerable freedom to complete the work, and was given much help from both the Soviet and Cuban governments. They made use of innovative filming techniques, such as coating a watertight camera's lens with a special periscope cleaner, so the camera could be submerged and lifted out of the water without any drops on the lens or film. At one point, more than a thousand Cuban soldiers were moved to a remote location to shoot one scene &mdash; this despite the then-ongoing .

Even though it had such great support, the movie was given a cold reaction by audiences. In it was criticized for showing a rather d view of Cubans, while in it was considered naïve, not enough, even too sympathetic to the lives of the pre-Fidel classes. Also, upon its original release, the movie never reached Western countries largely due to it being a production.

When the USSR collapsed in the early 1990s, "I Am Cuba" was virtually unknown. In 1992, Cuban novelist , the guest co-director of the , screened a print of the film at the festival as part of a retrospective on Kalatazov. The screened the film in 1993. Shortly after the festival, three film professionals who had screened "I Am Cuba" at the San Francisco screening contacted friends at Milestone Films in New York. The tiny film distributor had released several "lost" or neglected older films (as it continues to do). Milestone watched a blurry unsubtitled VHS tape of the film and then went about acquiring the distribution rights from Mosfilm in Russia. In 1994, a friend invited to a private screening. Scorsese was amazed by the film, and when Milestone approached him to lend his name to the company's release of the film, he was happy and enthusiastic to do so. Milestone's release was also co-presented by another fan of "I Am Cuba", director . Milestone's release opened at New York's in March 1995. For the tenth anniversary of the film, Milestone debuted a new 35 mm restoration of "I am Cuba" without the Russian overdubbing in September 2005.

What most amazes audiences about this movie are the long takes (cf. the much later ). Initially a three minute aerial shot of rural tropical landscape is disrupted by an infamous jumpcut to the top of a hotel building where a is going on accompanied by raucous pop music. The camera, using a , moves among the contestants, goes out of the building, moves downwards for two stories into a club then circles around the bartenders. It then enters the pool and actually goes underwater, where the shot ends. In fact, the original scene went on for longer: the camera actually left the water (special submarine lenses cleaned off water droplets), but Kalatozov decided to cut this scene from the final movie. This scene was appropriated by in his film "", when the camera is tracking around a pool, and then goes under water, and the sound changes, just like in "I Am Cuba".

There is also a remarkable four minute scene of a slowly retreating long shot of a burning sugar cane field and house. This scene was later appropriated by in "" (1986).

In another scene, the camera follows a coffin between a crowded street. Then it stops and slowly moves upwards for at least four stories until it is filming the coffin from above a building. Without stopping it then starts sideways and enters through a window into a cigar factory, then goes straight towards a window where the cigar workers are watching the coffin. The camera finally passes through the window and, still following the court , appears to float over the street between the buildings. These shots were accomplished by assembling a line of technicians, and passing the camera down the line, from hand to hand.

The movie consists of four distinct short stories about the suffering of the Cuban people and their reactions, varying from passive amazement in the first, to a guerrilla march in the last. Between the stories, a female (credited "The Voice Of Cuba") says such things as, "I am Cuba, the Cuba of the s, but also of the people."

The first story (centred on the character Maria) shows the destitute Cuban masses contrasted with the splendor in the American-run gambling casinos and prostitution in Havana. The next story is about a farmer, Pedro, burning his sugar cane when he learns he is going to lose his land to . The third story describes the suppression of rebellious students led by a character name Enrique at Havana University (featuring one of the longest camera shots). The final part shows how Mariano, a typical farmer, ends up joining the rebels in the Mountains, ultimately leading to triumphal march into to proclaim the revolution.

In 2005 a documentary about the making of "I Am Cuba" was released called "Soy Cuba: O Mamute Siberiano" or "I Am Cuba: the Siberian Mammoth" directed by a Brazilian, . The film looks at the history of the making of the film, explains some of the technical feats of the film and there are interviews with many of the people who worked on it.