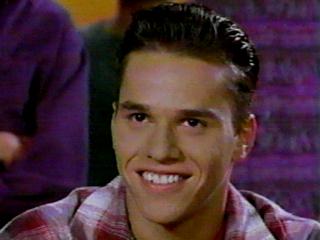 Rocky DeSantos is a in the "" universe. In the second season of the television show "", he joined the team as the second . He later became the during ' and retired before '.

Rocky loves to have fun and enjoys going to dances, carnivals, mystery parties, luaus, and hanging out at Ernie's Juice Bar. He's more than willing to join in a scavenger hunt or help in clean-up projects. He also became an extra in a sci-fi movie.

Rocky possesses a spirited and fun-loving personality. He is outgoing and loud, and always has a corny joke in mind. Rocky is comical and honest, balancing out his fun, playful side with his genuine sincerity towards his friends. He provides the light humor the team needs to relieve their worries and stress, but is also acknowledged for his reliability and fidelity. He is a trustworthy and coolheaded person in general, harmonizing his friends’ constant worries with his cheerfulness.

Rocky likes to challenge his mind. He attempted to teach a chemistry class, took a computer science course and a botany class, and likes going to museums.

Rocky is a guy with a big appetite for life and food, and keeps his energy going by staying active. He enjoys working on his karate, running with the guys, playing volleyball, football, baseball, snowboarding, and other, various sports. Rocky also channels his energy by becoming a volunteer lifeguard at Angel Grove Beach.

Rocky first met the Ranger teens when saving a baby along with his friends and . The three of them lived in Stone Canyon (a fictional city in California) and were visiting Angel Grove to represent Stone Canyon in the Team Ninja Competition. Because of his skill as a martial artist, Rocky became an immediate target of , and along with Adam and Aisha, ended up kidnapped and thrown in the Dimension of Despair, along with their favorite Stone Canyon teacher, Mr. Anderson. Luckily, the Power Rangers came to rescue them just in time, but not before Rocky, Adam, and Aisha discovered the Rangers' identities when and had to take off 's helmet after Billy fought with the Serpent of Darkness. Rocky, Adam, and Aisha were later taken to the Command Center to meet and were sworn to secrecy. Rocky (along with Adam and Aisha) eventually moved to Angel Grove permanently.

Rocky was chosen to replace as the Red Power Ranger after Jason, and his fellow Rangers , and were selected to attend the peace conference in Geneva, Switzerland. Rocky was entrusted with the powers of the Power Coin and the Red Dragon Thunderzord.In Season 3 of "MMPR", Rocky went through one of the most disastrous events for a Red Ranger (despite him not being the leader) when the Thunderzords were destroyed by and his band of monsters, thus also destroying the original Dinozords and damaging the Power Coins beyond use. Rocky later gained new Ninja powers of the Ape, becoming the Red Ninja Ranger. As a Ninja Ranger, he could perform slide-teleportation, the decoy suit trick, and other Ninja powers. Rocky's Ninja power was enhanced strength and the ability to quickly climb up surfaces. Rocky also gained the ability to pilot the Ape Ninjazord, as well as the Red Shogunzord. He was also later granted the power of the Metallic Armor.

The Rangers managed to get the , but wanted to make sure that couldn't get it again, so the Rangers split it into five sub-crystals and sent them to different points in history.

Due to the movie taking place in an alternate timeline than the series, it if unknown is Rocky piloted either the Tyrannosaurus Dinozord or the Red Dragon Thunderzord, although he did possess the Tyrannosaurus Power Coin. It is also unknown if Jason had been the Red Ranger before Rocky in the movie's timeline. When Lord Zedd releases the terrible Ivan Ooze from his chamber, Ivan destroys the command center and the Dino powers. After traveling to the distant planet of Phaedos, Rocky gains the power of the Ninjetti, and the animal spirit of the Ape, along with the Ape Ninjazord.

Vile then turned back time using the Orb of Doom, turning the Rangers back into children. The Rangers soon recruited the to fight in their stead. Billy had then created a device which would restore their them to their old selves. He used the Ninja Coins as a power source, testing it on himself. This worked, but it allowed Goldar to capture the coins and Zedd destroyed them.

Rocky had to recover the Blue Zeo Sub-Crystal. He bravely scaled down an active volcano and retrieved the subcrystal, and thus helped save the village. Rocky assumedly met the younger version of his grandfather, Pablo DeSantos, at this time as well.

When Rocky's fragment of the Zeo Crystal was reunited with the four other fragments, he is suited up to as the Blue Zeo Ranger for "Power Rangers: Zeo". He piloted the Zeozord III (based on the ) and the Super Zeozord III. His Zeo Battle Helmet (from Zeozord III) accessed the Zeo Pyramid Power.

During "Zeo", Jason returned as the Gold Zeo Ranger, and Rocky was left feeling unneeded for a time, even attempting to take on King Mondo himself. In the end, he realized that he was an important member of the team, and would always be needed.

Accompanied by an unmatched enthusiasm towards everything in life, Rocky threw himself into a kick and wound up landing and hurting his back during a practice match (which mirrors what actually happened to his actor, Steve Cardenas, in real life). The injury forced him to resign from his Ranger duties. While he recouped in the hospital, his friends were facing a new danger and Zordon had to recruit a new Ranger. Unable to join the other Power Rangers on their trip to Murianthias, he sent a 12-year-old freshman and friend, (who had learned of the Rangers' identities by accident), in his place. Rocky never begrudged the fact that he was unable to become the Blue Turbo Ranger.

During the "Turbo" episode "Shift Into Turbo, Part 3", Rocky was seen still recovering from his back injury, and declined rejoining the Rangers, confident that the powers were in good hands with Justin, and relieved that his era of being a Ranger was over, though he was touched by the fact that he would "always remain a Power Ranger in spirit."

After seeing his friends off at graduation, Rocky opened up his own dojo, enjoying his post-Ranger life after many years of dedicated service to the Power Rangers.