The picture was produced by Diego Dubcovsky, José María Morales, and Marc Sillam, and co-produced by Amedeo Pagani. Family Law was Argentina official submission for the 2004 Academy Award for Best Foreign Language Film 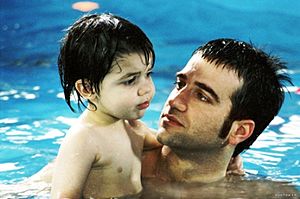 The film tells the story of Ariel Perelman (Daniel Hendler). While he has an easygoing lifestyle, he's trying to find his way in life in Buenos Aires, Argentina. He works at a university as a law professor. The film begins with a long narration of the way things stand in his life. He describes his father, Bernardo Perelman (Arturo Goetz), in detail. Perelman, as he's known, is a popular public defender who meets his clients where they work or in restaurants so he can determine what they are "all about." Most of his clients are generally poor. He's very close to his secretary (Adriana Aizemberg) since his wife died fifteen years ago. Work fills Perelman's days, and Ariel is astonished by his energy.

After lusting after Sandra (Julieta Díaz), an attractive woman who takes his class, Ariel decides to chase her and takes the Pilates class she teaches. Not much happens until Sandra is sued for teaching Pilates without the approval of the company who hold the rights to teach Pilates in Argentina. Ariel (known as Perelman to Sandra) reaches out to his father for help and wins the law suit.

In the process, Sandra falls in love with the younger Perelman and they marry. She begins to decorate their home for a few years and they have a child they name Gastón (Eloy Burman), who is a quite charming young boy.

Ariel's university building is shut down for a month because it had collapsed, and he is given some time off. However, he doesn't share this news with his wife. During this time his father starts spending some quality time with Ariel, which makes him think something must be wrong. Ariel is asked by the Swiss kindergarten school Gastón attends to participate in a play and swim classes with the other fathers. Ariel first rebels but gives in.

The film ends with his father's death and burial and a long introspective look at Ariel Perelman's life in his 30s.

Derecho de familia is part of a loose trilogy of films. The other two are: Esperando al mesías (2000) and El abrazo partido (2004). All were written and directed by Burman and star Daniel Hendler. They are largely autobiographical, dealing with the life of a young Jew in contemporary Buenos Aires.

Like the characters in the film, Burman's own father was a lawyer and he also went to law school.[2] 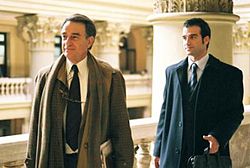 Daniel Hendler and Arturo Goetz as the Perelmans.

Jonathon Holland, film critic of Variety magazine, liked the film's story and wrote, "A deft, witty and emotionally rewarding study of a thirtysomething man in his roles as father and son, Daniel Burman's intensely personal "Family Law" completes his fatherhood trilogy. The second installment, "Lost Embrace", won the Silver Bear at Berlin in 2004. Again featuring an outstanding Daniel Hendler (best actor in 2004) and a script that fuses sharp observation with the intimacy of a lightly rewritten autobiography, pic effortlessly takes the viewer through a range of thoughts and moods. Fans of "Embrace" might lament the relative absence of social context this time, but pic's multiple merits should consolidate helmer's [sic] burgeoning offshore reputation."[3]

The senior film writer at the San Francisco Chronicle, Ruthe Stein, liked the comedy-drama's screenplay, the direction and acting, writing, "Family Law—a subtly perceptive charmer that was Argentina's entry for a best foreign film Oscar and might have been nominated in a less competitive year—is in no particular hurry to get where it's going...Although Hendler and Goetz don't really look alike, they manage to convey a family resemblance in their mannerisms, particularly the erect way they carry themselves, as if they're somebody...Aizemberg works wonders. You get the sense from her radiance that the secretary has always had a thing for her boss. His wife's death allowed her to finally express it physically, and she's overjoyed by their intimacy...Ultimately this is a movie about a son's discovery of the man he knows mostly as a father. It's a serious subject handled with humor—not the ha-ha kind, but the hard laughter that comes from recognizing parts of yourself in the Perelmans."[4]

Critics Frederic and Mary Ann Brussat, of the website Spirituality and Practice like the film and wrote, "Family Law explores in a realistic and touching way the emotional barriers that often block intimate conversation between fathers and sons...It's easy today to send e-mails and faxes anywhere in the world, yet we rarely speak to those who live in our neighborhood. We have cellular telephones and pagers, yet we spend very little time in deep conversation with those in our immediate family. This strange phenomenon is depicted very poignantly in this snappy and satisfying film from Argentina written and directed by Daniel Burman. We were very impressed with his Lost Embrace about a father and son reunion after years apart. This one also deals with a father and son relationship."[5]