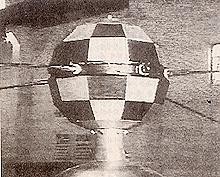 Kwangmyŏngsŏng meaning ("Bright Star") in Korean is a class of experimental satellite developed by and named after a Chinese by . It is the first class of satellite built by this country and the program started in the s.

On occasion of the 50th anniversary of the founding of the DPRK, the official announced on st, 87, that a satellite called "Kwangmyŏngsŏng-1" had been launched at 3:07 on from a launch site in , Hwadae-gun, North Hamgyong Province by a
SLV. This launch made the DPRK the ninth spacefaring nation, after the , , , , , , and . [cite web|url=http://www.gotoread.com/vo/4727/page494445.html|title =世界各国发射的航天器比较 |publisher= |date=2007-05-16|accessmonthday=September 13|accessyear=2008]

According to 's Academician , the SLV was developed in the s when the late leader decided to launch a Korean satellite. At the beginning of the s, the capacity to achieve this goal was already reached.

On occasion of 's 50th anniversary, on th, , his father presented him one of his Chinese calligraphed . Referring to his son's birth, an event that was reportedly marked by a double rainbow, and a bright star in the sky, the future Korean SLV and satellite would be named after it:

The decision to send a North Korean satellite was precipitated by the successful launch of 's first satellite aka on th, and its second satellite, aka , on th, , both by an European SLV. In a late-1993 meeting of the Korean Workers’ Party , expressed his desire to place quickly a satellite into orbit, leading to the expansion of the DPRK’s nascent space program and the requirement for a space launch vehicle.

The SLV （「運輸火箭白頭山一號」）is the civilian version of the （「大浦洞一號」）, with an additional spin up solid motor orbital insertion third stage. The first and second stages of the SLV are made up of / liquid propellant rocket engines and the third spin-up orbital insertion stage of a solid propellant engine. The first stage consisted of a No-Dong 1 and the second stage of a Hwasong-6 , a derivative of the Scud-C. The third stage is derived from the Chinese booster.

Thus, only five years later, preparations for the first satellite launch began at the Musudan-ri Launch Facility on th, . Two weeks later, vessels proceeded to their mission area into the (East Sea of Korea). By that time, South Korea had already placed two other satellites into space with Delta-7925 SLVs, aka aka on th, and aka on th, .

Confirmation of the launch and detection of the satellite by the Space Tracking Center in Moscow has quickly been reported by the . [cite web|url=http://bbs.tiexue.net/post2_1391730_1.html|title =朝鲜导弹和卫星的发展概况|publisher= |date=2006-07-07|accessmonthday=September 25|accessyear=2008]

According to the North Korean media it completed its hundredth orbit on , , and was in an elliptical orbit with a perigee of 218.82 km and apogee of 6,978.2 km with a period of 165 minutes and 6 seconds. It was also reported to be transmitting the melody of "" and "" and the Morse signals " Korea" at 27 MHz, as well as orbital data including temperature, pressure and conditions of power source.

Thus, scientific foundations were laid for the development of future telecommunications satellites.

NORAD were unable to detect the satellite visually, by , or pick up its radio signals, reporting instead that it continued east, burning up, with a debris trail that apparently extended to approximately 4,000 ㎞. It is thought that the satellite launch appeared to have failed due to underperformance of the solid fueled third stage, placing the satellite into an orbit from which it decayed very quickly. But there is some doubt in adversary nations as to whether the satellite existed at all. Many of their observers arguing the story of a satellite launch was invented to allay the western outrage that followed North Korea's test-firing of a “Taepodong-1 ballistic missile”, which crossed over before crashing into the . Following the test, Japan’s Self Defense Forces even went to sent three destroyers and patrol aircraft to extensively search the impact areas in the Pacific for wreckage of the alleged “missile and its warhead”. Expectingly, all these efforts have been in vain.

On its th, edition, the already announced that North Korea would launch another satellite in the future.

In a very controversial series of missile test conducted on the occasion of the American National Day on th, , according to the internet edition of the （「朝鮮新報」） published on st, , the payload of the SLV （「運輸火箭白頭山二號」） civilian version of the Taepodong 2C/3 （「大浦洞二號」） could have been made of the "" （「光明星二號」） , with a mass ranging from 170 ㎏ to 550 ㎏. Launched from the launch center, the rocket failed after only 42 seconds.

On occasion of the 10th anniversary of the Kwangmyŏngsŏng-1 satellite launch attempt, program conducted by North Korea in close cooperation with and , the has proceeded with its own test. According to practice also observed by , Iranian authorities announced to their Chinese allies on th, the incoming imminent launch of a satellite. [cite web|url=http://www2.irna.ir/ch/news/view/line-52/0808167168204858.htm|title =伊朗将于下周发射自主生产的卫星 |publisher= |date=2008-08-16|accessmonthday=August 18|accessyear=2008] On th, on the occasion of the birthday anniversary of Shiites' 12th Imam , Iran proceeded as preannounced with the second test launch of a three stages Safir SLV. Reza Taghizadeh, head of the Iranian Aerospace Organization, told state television "The Safir (Ambassador) satellite carrier was launched today and for the first time we successfully launched a dummy satellite into orbit". [citeweb|title=Iran says it has put first dummy satellite in orbit |url=http://news.yahoo.com/s/nm/20080817/wl_nm/iran_satellite_dc_4|publisher=""|accessdate=2008-08-18]

On occasion of the 10th anniversary official celebrations, broadcasted on st, and received in , pledged not only for further satellite launches of the Kwangmyongsong series but also for the resumption of its nuclear program starting with the reactivation of the -producing Yongbyon nuclear plant shut down only a year early. [cite web|url=http://www.warsawto.net/bbs/read.php?tid=6177|title =光明星1号”发射10周年 朝鲜称随时可以发射卫星|publisher= |date=2008-09-05|accessmonthday=September 25|accessyear=2008]

Furthermore, on th, , supporting previous claims to launch more satellites into space, the existence of a totally new launch facility exceeding both in size and sophistication the Musudan-ri test base on North Korea's east coast has been revealed. Known as （平安北道鐵山郡同昌里同昌洞發射基地）and located in the province at coord |39.660|N|124.706 |E|, it is built on the former site of a small village called . Thus, the first stage of a SLV would land in the Sea of Japan at about coord |39.433290|N|129.472213|E|. Indeed, the old Musudan-ri test center was not designed for winter time operations but only for the occasional space satellite launch campaign in the spring, summer or fall seasons, the SLVs being not easily prepared for launch.The new space center includes a movable launch pad and a ten storeys tall tower capable of supporting the DPRK's largest SLVs, including a rocket motor test pad similar in size and design to the Iranian rocket test facility built east of . There are also support buildings, a vertical assembly building and an engine test stand among other structures. Following the relocation of scores of new aerospace factories far away from the , it is specially built in the mountainous North West part of the country, closer to the Chinese allied border, at only 50 km of it and therefore benefiting from the Chinese airspace protection, the site is consequently meant to be safer. [cite web|url=http://military.people.com.cn/GB/1077/52987/7932317.html|title =朝鲜在中朝边境建第二导弹基地曝光 |publisher= |date=2008-09-11|accessmonthday=September 11|accessyear=2008] The site is said to be completed at 80 percent, and will be fully operational within a year or two. Baekdusan-2 SLV engine ignition test have already started. [cite web|url=http://rusnews.cn/guojiyaowen/guoji_anquan/20080916/42269572.html|title =消息人士：朝鲜试验远程导弹发动机|publisher= |date=2008-09-16|accessmonthday=September 16|accessyear=2008]

The satellite has since featured prominently in North Korean festivities and celebrations such as the . Commemorative stamps showing the real shape of the satellite still attached to the spin up solid motor orbital insertion third stage and more than two orbits have also been printed on several occasions. [cite web|url=http://www.qlstamp.com/news/0008/2004616103040.htm|title =朝鲜6月18日发行胡锦涛、温家宝等中国领导人的邮票|publisher= |date=2004-06-16|accessmonthday=September 19|accessyear=2008] [cite web|url=http://shop307.ocnk.net/zoom/79|title =北朝鮮のミサイル、テポドン発射記念切手|publisher= |date=2004-06-16|accessmonthday=September 19|accessyear=2008]