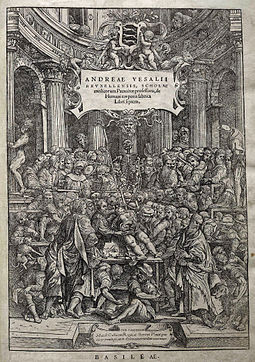 The title page of the Fabrica. The full title is Andreae Vesalii Bruxellensis, scholae medicorum Patauinae professoris, de Humani corporis fabrica Libri septem (Andreas Vesalius of Brussels, professor at the school of medicine at Padua, on the fabric of the Human body in seven Books). 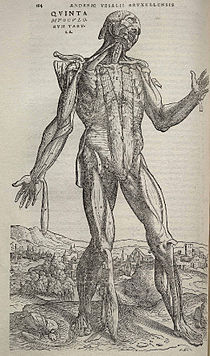 The Fabrica is known for its highly detailed illustrations of human dissections, often in allegorical poses.

De humani corporis fabrica libri septem (On the fabric of the human body in seven books) is a textbook of human anatomy written by Andreas Vesalius (1514–1564) in 1543.

The book is based on his Paduan lectures, during which he deviated from common practice by dissecting a corpse to illustrate what he was discussing. It presents a careful examination of the organs and the complete structure of the human body. This would not have been possible without the many advances that had been made during the Renaissance, including both the artistic developments and the technical development of printing. Because of this, he was able to produce illustrations superior to any that had been produced up to then.

Fabrica rectified some of Galen's worst errors, including the notion that the great blood vessels originated from the liver. Even with his improvements, however, Vesalius clung to some of Galen's errors, such as the idea that there was a different type of blood flowing through veins than arteries. It was not until William Harvey's work on the circulation of the blood that this misconception of Galen would be rectified in Europe.

Vesalius had the work published at the age of 28, taking great pains to ensure its quality. The illustrations are of great artistic merit and are generally attributed by modern scholars to the "studio of Titian" rather than Johannes Stephanus of Calcar, who provided drawings for Vesalius' earlier tracts, but in a much inferior style. The woodcuts were greatly superior to the illustrations in anatomical atlases of the day, which were often made by anatomy professors themselves. The woodcuts were transported to Basel, Switzerland, as Vesalius wished that the work be published by one of the foremost printers of the time, Joannis Oporini. The illustrations were also created using engraved copper plates (called intaglio), which allowed for very fine detail (see 'Scientific Revolutions' by Brian S. Baigrie, pages 40-49 for more information and a translation of Vesalius' preface).

The success of Fabrica ensured the health of Vesalius' coffers, and in time, fame. He was appointed physician to the Holy Roman Emperor Charles V; Vesalius had dedicated the work to the ruler, and presented him with the first published copy (bound in silk of imperial purple, with specially hand-painted illustrations not found in any other copy). The Fabrica was republished in 1555.

A copy of the book clad in human skin was donated to Brown University's John Hay Library by an alumnus. Its cover is "polished to a smooth golden brown" and, according to those who have seen the book, it looks like fine leather. Covering books in human skin was not an uncommon practice a couple of centuries ago, utilizing the skin of executed convicts and poor people who died with no one to claim the body.[1]