The current general secretary of DYFI is Tapas Sinha and the president is P. Sreeramakrishnan.

DYFI is a member of World Federation of Democratic Youth. 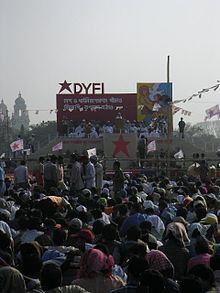 The DYFI affiliate in Jammu and Kashmir is called Democratic Youth Federation of Kashmir. In Tripura there is a separate body, affiliated to DYFI, called Tribal Youth Federation. In Kerala DYFI has a strong base and the current secretary of DYFI-Kerala State Committee is T.V. Rajesh, and President is M.B. Rajesh.

The organization was formed on 3 November 1980 from its inaugural conference held at Saheed Kartar Singh Saraba Village, Ludhiana, Punjab from 31 October to 3 November. Prior to that CPI(M) had different youth organizations in different states.

At national level, DYFI publishes the magazine Naujawan Drishti (Youth Stream). On state level there are various publications, such as Jubashakti in West Bengal and Yuvadhara in Kerala.