Nukufetau
This article is about atoll in Tuvalu. For the islet with a similar name in Wallis and Futuna, see Nukufetao.

Nukufetau is an atoll that is part of the nation of Tuvalu. The atoll was claimed by the US under the Guano Islands Act some time in the 19th century and was ceded in a treaty of friendship concluded in 1979 and coming into force in 1983. It has a population (2002 census) of 586 and consists of at least 33 isles:

The biggest island is Motulalo. Savave has a village. The junior school is Tutasi Primary School. 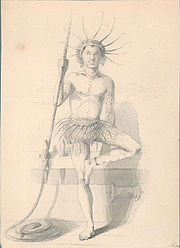 Tuvaluan man in traditional costume drawn by Alfred Agate in 1841 during the United States Exploring Expedition.

A man from the Nukufetau atoll, drawn by Alfred Agate in 1841.

Arent Schuyler de Peyster, of New York, captain of the armed brigantine or privateer Rebecca, sailing under British colours,[1] passed through the southern Tuvalu waters in May 1819 sighting Nukufetau.[2] In 1820 the Russian explorer Mikhail Lazarev visited Nukufetau as commander of the Mirny.[3] [4]

Louis Becke, who later became a writer, operated a store on Nukufetau from February 1881 to August 1881.[6] Becke later wrote a story about a fishing expedition: The Fisher Folk Of Nukufetau[7]

A notable local person is Saufatu Sopoanga, Prime Minister of Tuvalu 2002-2004, who represented Nukufetau in the Parliament of Tuvalu for a number of years.