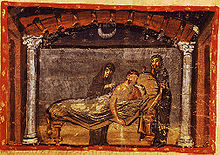 Aeneas and the Penates , from a 4th-century manuscript

In ancient Roman religion, the Di Penates or Penates (

/pɨˈneɪtiːz/) were among the dii familiares, or household deities, invoked most often in domestic rituals. When the family had a meal, they threw a bit into the fire on the hearth for the Penates.[1] They were thus associated with Vesta, the Lares, and the Genius of the paterfamilias in the "little universe" of the domus.[2]

Like other domestic deities, the Penates had a public counterpart,[3] the cult of the ancestral gods of the Roman people, originating in Lavinium,[4] where they were also closely linked with Vesta. According to one strand of tradition pertaining to the public Penates, they were identified as the sacred objects rescued by Aeneas from Troy and carried by him to Italy;[5] they, or rival duplicates, were eventually housed in the Temple of Vesta in the forum. Thus the Penates, unlike the localized Lares, are portable deities.[6] Archaeological evidence from Lavinium shows marked Greek influence in the archaic period, and Aeneas himself was venerated there as Father Indiges.[7] At the new year, Roman magistrates first sacrificed to Capitoline Jupiter at Rome, and then traveled to Lavinium for sacrifices to Jupiter Indiges and Vesta, and a ceremonial visit to the "Trojan" Penates.[8]

An etymological interpretation of the Penates would make them in origin tutelary deities of the storeroom, Latin penus, the innermost part of the house, where they guarded the household's food, wine, oil, and other supplies.[9] Cicero explained that they "dwell inside, from which they are also called penetrales by the poets.[10] The 2nd-century AD grammarian Festus defined penus, however, as "the most secret site in the shrine of Vesta, which is surrounded by curtains."[11] Macrobius reports the theological view of Varro that "those who dig out truth more diligently have said that the Penates are those through whom we breathe in our inner core (penitus), through whom we have a body, through whom we possess a rational mind."[12]

They can also be associated with the ascendancy of a Roman family, penates being the spirits of the ancestors. Roman houses used to have a little shrine at the entrance dedicated to the goddess Vesta (goddess of the home). In this shrine little statues of the penates were kept.[citation needed]