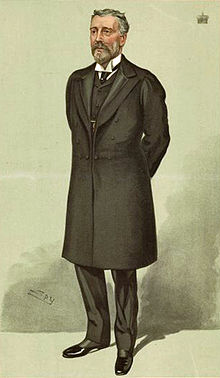 Cobham was the eldest son of George William Lyttelton, 4th Baron Lyttelton, and Mary Glynne. Alfred Lyttelton was his younger brother. He was educated at Eton and Trinity College, Cambridge.[1]

He was elected to the House of Commons for East Worcestershire in 1868, a seat he held until 1874. Apart from his parliamentary career he also served as High Sheriff of Bewdley. Cobham succeeded his father as fifth Baron Lyttelton in 1876. In 1889 he also succeeded his distant relative Richard Temple-Nugent-Brydges-Chandos-Grenville, 3rd Duke of Buckingham and Chandos, as eighth Baron and Viscount Cobham.

Cobham married the Hon. Mary Susan Caroline Cavendish, daughter of William George Cavendish, 2nd Baron Chesham, in 1878. He died in June 1922, aged 79, and was succeeded in his titles by his eldest son John. His second son George William Lyttelton became a noted master at Eton and was the father of the jazz trumpeter Humphrey Lyttelton. Lady Cobham died in 1937.

He came from a notable cricketing family, his father (GW Lyttelton), five brothers (GWS Lyttelton, AT Lyttelton, RH Lyttelton, E Lyttelton, Hon. A Lyttelton), his sons (JC Lyttelton, CF Lyttelton) and his grandson (CJ Lyttelton) all playing first-class cricket, and in the case of the Hon. A Lyttelton Test cricket. He himself played 35 first-class matches between 1861 and 1867, mainly for Cambridge University. A right-handed batsman and wicketkeeper, he scored 1439 runs at an average of 27.15, including 2 centuries. Cobham was President of Marylebone Cricket Club in 1886.