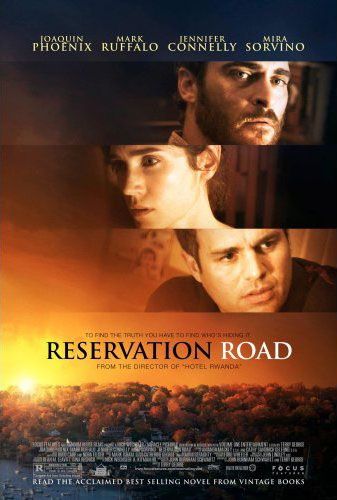 "Reservation Road" is a 2007 film directed by and based on the book of the same title by , who, along with George, adapted the novel for the screenplay. The film deals with the aftermath of a tragic car accident. The film stars and . The film arrived in theaters , .

The film was shot in starting in late October 2006, with the opening scene at . Part of the movie was also filmed at Amusement Park in , Olde Blue Bird Inn & Gas Station and adjacent Baseball Field in and shots of are used in the trailer and movie. The trailer features the song, "Grey Room".

Dwight Arno (), a lawyer, is divorced from Ruth (). Their son Lucas () lives with Ruth. Dwight has him on the weekends. While in a stadium watching a baseball match they are harassed by telephone calls from Ruth, telling Dwight that he is late returning the boy. Driving the boy home, Dwight hurries to avoid losing the right to weekly visits with Lucas. He accidentally runs over the 10-year-old boy Josh Learner (), who crosses the road at a gas station to release fire flies he'd caught, after his mother Grace () told him that he cannot keep them. Dwight drives on. To Lucas, who has a minor injury, Dwight lies that they collided with a block of wood. He hears in the news that the boy died.

Dwight tries to cover up the evidence that he did it: he parks his car, which has some damage, in the garage and rents another car. He lies to the police that he gave the car to a charity some time ago. When Lucas recalls in passing that Josh's death was on the same day as their trip, Dwight lies that these were a week apart.

After the initial shock Grace gradually tries to get on with life as normally as possible, but her husband Ethan () is obsessed with finding out who killed his son, and frustrated with the lack of progress the police makes in the investigation. This causes much friction between the couple. Ethan hires a lawyer, who happens to be Dwight.

Out of guilt Dwight decides to turn himself in. At the police station he is at the point of telling the truth, but the police officer thinks he has come as Ethan's lawyer, admits that there is little chance they find the perpetrator, and gives him papers with details about the investigation, and, being in a hurry, leaves. These factors make it possible and tempting for Dwight to refrain from telling the truth after all, and so he does.

Uncomfortably Dwight encounters Ethan also in his leisure time: when he comes to Ruth's house to get Lucas for the weekend, Ethan is there to collect his daughter, who gets piano lessons from Ruth. Guilt-ridden, Dwight plans again to confess. In anticipation of going to jail later, Dwight asks Ruth to have Lucas for a week, saying he has to go away for some time afterwards. She is reluctant, but Dwight begs her in tears, saying that Lucas is all he has left. After seeing how desperately he wants this she agrees.

Ethan discovers that Dwight was the perpetrator; for revenge, and fearing that Dwight would be convicted to only a small punishment, he buys a gun, and comes to Dwight's house, where Lucas has just gone to bed. Ethan points the gun at Dwight. The latter, eager to avoid danger and trauma for Lucas, begs Ethan that they at least go outside. With Dwight in the trunk of the car, Ethan brings him to a place where he plans to kill him. Due to Ethan's emotions and hesitation Dwight manages to take the gun from Ethan and points it at him, but then he points it at himself. Ethan, seeing that Dwight feels very bad about the accident himself, loses his aggression and leaves. Dwight spends the night outside. Lucas, on his own, watches a confession to the hit-and-run that Dwight had filmed earlier.

The film received generally mixed reviews from critics. As of October 07, 2008, the review aggregator reported that 37% of critics gave the film positive reviews, based on 103 reviews. reported the film had an average score of 56 out of 100, based on 30 reviews.

The film performed badly at the box office. As per Yahoo Movies section the movie grossed mere $101,440 making it one of the least box office earners of 2007.