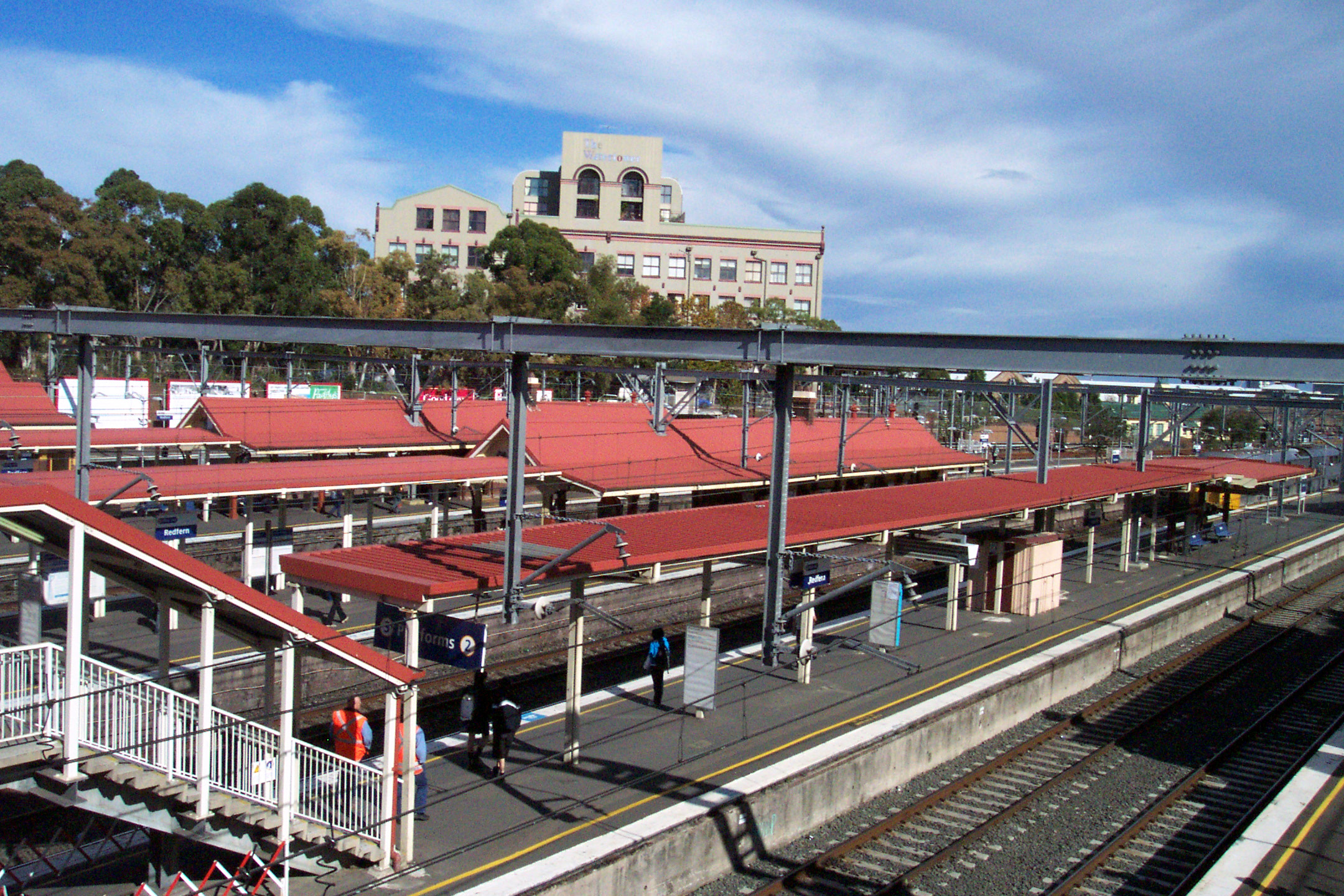 In the early history of the , "Redfern" was the name of the principal Sydney terminus. It was located to the south of Devonshire St and opened on in an area known as "Cleveland Fields." This original "Redfern" station comprised one wooden platform in a corrugated iron shed. As traffic increased the original station was replaced in 1874 by a brick building containing two platforms. This second station, which grew to 14 platforms, was designed for through traffic if the lines were extended in the city direction. This second station was found to be too far from the city centre, so a new station (the present Sydney Central Station) was built to the north of Devonshire Street and opened on . The 1874 station was soon demolished.

A station was opened in 1876 1.3 km on the Parramatta side of the "original Redfern" and called 'Eveleigh'. In 1885 Eveleigh's platforms were reconstructed at the present Redfern site, and on this station was renamed Redfern.

Platforms 11 and 12, as well as the area containing the unfinished platforms (see below), were constructed in the late 1970s as part of the Eastern Suburbs Railway construction, which opened in 1979.

Until the early 1990s Redfern had an overhead footbridge at the Eveleigh end of the platforms, connecting all platforms 1-10 by stairs. This was demolished because the funds for its maintenance were not available.A single track underground tunnel for trains going to Eveleigh Maintenance Centre, known as the "Engine Dive", runs under the above ground platforms. Various chimneys on the platforms (especially on platform 1) are evidence of this. The tunnel surfaces near the Eveleigh end of platform 10 and on the non-station side of the Lawson St bridge.The station is walking distance to the suburb of Waterloo known by its Govt Housing high rise buildings.

The present Redfern station was damaged by fire in the . The ticketing area and station master's office were significantly damaged - and the windows in the front of the station were bricked up for almost a year afterwards to prevent further attacks. They have since been replaced with glass windows.

As part of the construction of the Eastern Suburbs Railway (now platforms 11 and 12), it was proposed to build up to four platforms for the underground route (similar to Central.) Two of these platforms were built and now are Platforms 11 and 12, however, the two platforms above were half constructed above Platforms 11 and 12. These are visible through a small gap in the wall opposite Platform 11, as well as by a boarded up entry portal under the Lawson St Bridge (which was to be the down track), and a now filled-in dive tunnel under the Wells St Sectioning Hut on the Central side of Lawson St (which was to be the up track). The area in which the platforms were to be situated is visible from the station concourse at the entrance to Platform 10.

The station serves all Cityrail suburban lines except the airport branch of the Airport & East Hills Line, the Carlingford line, and the Cumberland Line. In peak hours, to serve connecting passengers and students at the University of Sydney, intercity services to the Blue Mountains, Newcastle & the Central Coast, and the South Coast also stop at the station to pick up or set down.

Despite an extension of the platform in the late 1990s, Platform 1 is considered a short platform, and passengers are asked to travel in the front six carriages of Intercity trains using the platform.

Platform 9:
*Eastern Suburbs & Illawarra Line - very rare trains from the Ilawarra line that travel via the City circle. These moves are being phased out under the Clearways project. The platform was used for Illawarra line trains before the Eastern Suburbs railway was built in 1979.
*The platform is mostly used for stabling trains, for trains coming from the Eveleigh Maintenance Centre, or for trains coming from the Macdonaldtown Turnback returning to the Inner West Line or Southern Line via the City Circle (anticlockwise).

Platform 10:
*Illawarra line colour>Eastern Suburbs & Illawarra Line - very rare trains from the Ilawarra line that travel via the City circle. These moves are being phased out under the Clearways project. The platform was used for Illawarra line trains before the Eastern Suburbs railway was built in 1979.
*The platform is mostly used for stabling trains, for trains returning to the Eveleigh Maintenance Centre, or for trains going to the Macdonaldtown Turnback from the Inner West Line or Southern Line.

"Platforms 13-14 (unfinished)"
*These were not fully constructed; are situated above Platforms 11 & 12 and next to Platform 10.

The station has three main exits - the main entrance and exit on Lawson St next to the ticketing area (Exit A on the diagram below), a second entrance on Gibbons St (especially for passengers using platforms 11 and 12) (Exit B on the diagram below), and a third exit to the , which is accessed by walking along platform 10 (Exit C on the diagram). During peak hours, the entrance to platform 10 is blocked by fare gates to prevent fare evasion by those travelling to the Technology Park area; these are opened during off-peak times or on the rare occasion when a train needs to stop at the platform. The other two entrances have their fare gates operating at all times.

At present, Redfern does not have Easy Access for wheelchairs. All above-ground platforms are accessible by stairs, so this would hinder most wheelchair access to the station. Platforms 11 and 12 are accessible by either stairs or escalators from a separate concourse near the Gibbons St exit.

In April 2006, Transport Minister John Watkins announced plans for a $2 million inquiry into concept designs for upgrading the station, including Easy Access facilities. The station requires upgrading due to an influx of new residents and workers set to result from the Redfern-Waterloo urban renewal project. ["$2 million concept: New designs on stations", Matt Sun, MX, , , p. 4]

Redfern does not have a connecting bus interchange; however, a stop close to the Gibbons Street entrance (near platforms 11 & 12) serves the following routes: