Nelumbo nucifera
"Padma" redirects here. For other uses, see Padma (disambiguation).
This article is about the flower. For the Prince album, see Lotusflower (album). For the Radiohead song, see Lotus Flower (song).

Nelumbo nucifera, known by a number of names including Indian Lotus, Sacred Lotus, Bean of India, or simply Lotus, is a plant in the monogeneric family Nelumbonaceae. The Linnaean binomial Nelumbo nucifera (Gaertn.) is the currently recognized name for this species, which has been classified under the former names, Nelumbium speciosum (Willd.) and Nymphaea nelumbo, among others. Names other than Nelumbo nucifera (Gaertn.) are obsolete synonyms and should not be used in current works. This plant is an aquatic perennial. Under favorable circumstances its seeds may remain viable for many years, with the oldest recorded lotus germination being from that of seeds 1,300 years old recovered from a dry lakebed in northeastern China.[1]

A common misconception is referring to the lotus as a waterlily (Nymphaea), an entirely different plant as can be seen from the center of the flower, which clearly lacks the structure that goes on to form the distinctive circular seed pod in the Nelumbo nucifera.[citation needed]

Native to Tropical Asia and Queensland, Australia,[2][3] it is commonly cultivated in water gardens. The white and pink lotuses are national flowers of India and Vietnam, respectively.

Plant taxonomy systems agree that this flower is in the Nelumbo genus, but disagree as to which family Nelumbo is in, or whether it should be part of its own unique family and order tree.

Bud of Nelumbo nucifera seen against a leaf

The roots of Nelumbo nucifera are planted in the soil of the pond or river bottom, while the leaves float on top of the water surface or are held well above it. The flowers are usually found on thick stems rising several centimeters above the leaves. The plant normally grows up to a height of about 150 cm and a horizontal spread of up to 3 meters, but some unverified reports place the height as high as over 5 meters. The leaves may be as large as 60 cm in diameter, while the showy flowers can be up to 20 cm in diameter.

Researchers report that the lotus has the remarkable ability to regulate the temperature of its flowers to within a narrow range just as humans and other warmblooded animals do.[4] Dr. Roger S. Seymour and Dr. Paul Schultze-Motel, physiologists at the University of Adelaide in Australia, found that lotus flowers blooming in the Adelaide Botanic Gardens maintained a temperature of 30–35 °C (86–95 °F), even when the air temperature dropped to 10 °C (50 °F). They suspect the flowers may be doing this to attract coldblooded insect pollinators. The study, published in the journal Nature, is the latest discovery in the esoteric field of heat-producing plants. Two other species known to be able to regulate their temperature include Symplocarpus foetidus and Philodendron selloum.

The distinctive dried seed heads, which resemble the spouts of watering cansphoto, are widely sold throughout the world for decorative purposes and for dried flower arranging.

The flowers, seeds, young leaves, and "roots" (rhizomes) are all edible. In Asia, the petals are sometimes used for garnish, while the large leaves are used as a wrap for food, not frequently eaten (for example, as a wrapper for zongzi). In Korea, the leaves and petals are used as a tisane. Yeonkkotcha (연꽃차) is made with dried petals of white lotus and yeonipcha (연잎차) is made with the leaves. Young lotus stems are used as a salad ingredient in Vietnamese cuisine. The rhizome (called ǒu (藕) in pinyin Chinese, ngau in Cantonese, bhe in Hindi, renkon (レンコン, 蓮根 in Japanese), yeongeun (연근 in Korean) is used as a vegetable in soups, deep-fried, stir-fried, and braised dishes and the roots are also used in traditional Asian herbal medicine. Petals, leaves, and rhizome can also all be eaten raw, but there is a risk of parasite transmission (e.g., Fasciolopsis buski): it is therefore recommended that they be cooked before eating.

Lotus rootlets are often pickled with rice vinegar, sugar, chili and/or garlic. It has a crunchy texture with sweet-tangy flavours. In Asian cuisine, it is popular with salad, prawns, sesame oil and/or coriander leaves. Lotus roots have been found to be rich in dietary fiber, vitamin C, potassium, thiamin, riboflavin, vitamin B6, phosphorus, copper, and manganese, while very low in saturated fat.[citation needed]

The stamens can be dried and made into a fragrant herbal tea called liánhuā cha (蓮花茶) in Chinese, or (particularly in Vietnam)[citation needed] used to impart a scent to tea leaves. The lotus seeds or nuts (called liánzĭ, 蓮子; or xian liánzĭ, 鲜莲子, in Chinese) are quite versatile, and can be eaten raw or dried and popped like popcorn, phool makhana. They can also be boiled until soft and made into a paste, or boiled with dried longans and rock sugar to make a tong sui (sweet soup). Combined with sugar, lotus seed paste becomes one of the most common ingredients used in pastries such as mooncakes, daifuku, and rice flour pudding.[5]

In Vietnam, the bitter tasting germs of the lotus seeds are also made into a tisane (trà tim sen).

A unique fabric from the lotus plant fibers is produced only at Inle lake, Union of Myanmar and is used for weaving special robes for Buddha images called kya thingahn (lotus robe).

Vishnu holding the lotus, also sitting on it and wearing a lotus-bud crown.

From ancient times the lotus has been a divine symbol in Asian traditions representing the virtues of sexual purity and non-attachment.

Hindus revere it with the divinities Vishnu and Lakshmi often portrayed on a pink lotus in iconography. In the representation of Vishnu as Padmanabha (Lotus navel), a lotus issues from his navel with Brahma on it. Goddess Sarasvati is portrayed on a white-colored lotus.

Often used as an example of divine beauty, Vishnu is often described as the 'Lotus-Eyed One'. Its unfolding petals suggest the expansion of the soul. The growth of its pure beauty from the mud of its origin holds a benign spiritual promise. In Hindu iconography, other deities, like Ganga and Ganesha are often depicted with lotus flowers as their seats.

The lotus plant is cited extensively within Puranic and Vedic literature, for example:

One who performs his duty without attachment, surrendering the results unto the Supreme Lord, is unaffected by sinful action, as the lotus is untouched by water.
—Bhagavad Gita 5.10:

I love the lotus because while growing from mud, it is unstained. 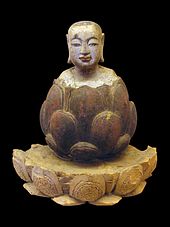 Most deities of Asian religions are depicted as seated on a lotus flower. In Buddhist symbolism, the lotus represents purity of the body, speech, and mind as if floating above the muddy waters of attachment and desire. According to legend[citation needed], Gautama Buddha was born with the ability to walk, and lotus flowers bloomed everywhere he stepped.

In the classical written and oral literature of many Asian cultures the lotus is present in figurative form, representing elegance, beauty, perfection, purity and grace, being often used in poems and songs as an allegory for ideal feminine attributes. In Sanskrit the word lotus (padma पद्म) has many synonyms. Since the lotus thrives in water, ja (denoting birth) is added to synonyms of water to derive some synonyms for the lotus, like ambuja (ambu= water + ja=born of), neeraj (neera=water + ja= born of), pankaj, pankaja, kamal, kamala, kunala, aravind, arvind, nalin,nalini and saroja[6] and names derived from the lotus, like padmavati (possessing lotuses) or padmini (full of lotuses).[7] These names and derived versions are often used to name girls, and to a lesser extent boys, in India, Nepal and Sri Lanka, as well as in many other countries influenced by Indic culture, like Thailand, Cambodia, Indonesia and Laos.

Drawing in turn on these beliefs, the international Bahá'í community adopted this symbolism in the design of the Lotus Temple in New Delhi, India.