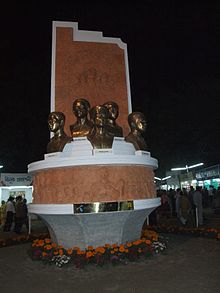 Moder Gorob or Our Pride is a sculpture situated in front of Bangla Academy building in Dhaka, Bangladesh. It was dedicated to the memory of those killed during the Bengali Language Movement demonstrations of 1952, when protesters demanding Bangla as a state language of former Dominion of Pakistan were massacred by Pakistan Police.[1]

The Dr. Fakhruddin Ahmed, chief of care-taker government inaugurated it in the first day of February in 2007, during opening the Ekushey Book Fair.

There are five different metal sculptures of Salam, Rafiq, Jabbar, Sofiur and Barkat. 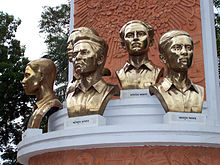 Close up view of Moder Gorob

These are situated on a base. In the rear part, there is a long wall rising. There are three steps on the upper part of the wall. Both sides of the wall and other brick-made parts are ornamented by frescoes of the Language movement of 1952.

1.3 million taka was the expense and GrameenPhone, a telecom company gave 1 million as sponsorship, the rest came from Bangla-Academy fund.

It is said by 61 fine-arts students that the claimer of Moder Gorob did not design it.[citation needed]