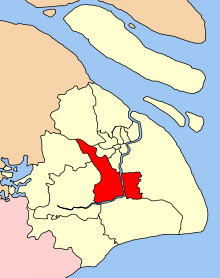 The Minhang District (simplified Chinese: 闵行区; traditional Chinese: 閔行區, Shanghainese: min2ghaon1 chiu1, Mandarin pinyin: Mǐnháng Qū) of Shanghai has a land area of 371.57 km2 and population of 2,429,000 residents as of 2010.[1]

It is mostly a residential district, though it is also home to some of the many factories and production facilities in Shanghai. Residential housing development is the main source of local government revenue. Qizhong Forest Sports City Arena is located in Ma Qiao Town. The Aerospace Museum is being constructed at Pujiang Town.

Shanghai Jiaotong University and East China Normal University both have campuses in the southern part of Minhang District.