Taking place one month after the events of the first Mega Man Battle Network game, the plot follows the protagonist Lan Hikari and his "NetNavi" avatar MegaMan.EXE in their fight against the "WWW (World Three)" organization and its attempt to unleash and spread the infectious "Zero Virus" into cyberspace. The player controls MegaMan through a set of levels that require actions such as jumping, sliding, and shooting, as well as the use of special "Battle Chips" that grant the player various combat and platforming abilities. Network Transmission combines action and platforming gameplay elements from older Mega Man games with the strategy and role-playing elements as defined by the Battle Network series.

The development team's intent was to meld these attributes into a home console title that would appeal to the young gamer audience that they found with the GBA series. Critical reception for Network Transmission has been mostly average reviews. Although it received some positive remarks for its Battle Chip gameplay, many critics complained that the game features a high or unbalanced difficulty level. The game's sound and its combination of 2D and 3D cel-shaded graphics has been met with varied opinions.

The storyline of Mega Man Network Transmission takes place during the first decade of the 21st century ("200X"), one month after the original Mega Man Battle Network.[4] Following the defeat of the "Life Virus", the ultimate weapon of Dr. Wily and the "WWW (World Three)" organization, Lan Hikari and his "NetNavi" MegaMan.EXE return to a life of ease. However, no sooner does Lan begin to relax when he hears of a mysterious and destructive computer virus called the "Zero Virus" that infects Navis and causes mayhem via "PET (PErsonal Terminal)" e-mail.[4][5] Lan has other qualms to deal with however, receiving an e-mail detailing fellow NetNavi Roll.EXE being trapped in the internet.[4] MegaMan goes to save her, finding an infected FireMan.EXE as the cause of trouble. Defeating him, the duo talk to Mr. Match (FireMan's operator), and learn of the vaccine being distributed to amend the Zero Virus is actually doing just the opposite, having caused FireMan to go berserk.[6]

Confirming this with Lan's father, Dr. Yuichiro Hikari, the two set out to search for the cure of the problem, finding many situations of pragmatic Navis infected and causing mayhem. Stopping all of them and returning them to their respective operators, the two eventually discover more clues leading to the remnants of the WWW. It is revealed that a powerful Navi called StarMan.EXE has been distributing the virus.[7] After defeating StarMan, MegaMan and Lan engage in a climatic battle against the powerful super virus Zero himself. However, at the conclusion of the battle, just as the finishing blow is about to be delivered to Zero, the heroes discover he is not evil. Lan's father then transforms him into a full-fledged Navi. Their happiness is short-lived, however, when a former member of the WWW simply named "Professor" reveals this was all part of his scheme to revive the dreaded Life Virus.[8] Analyzing clues, MegaMan and Lan engage and defeat the second Life Virus and use Zero's observation powers to eventually bring the Professor to justice. There is dialogue at the end of the game between ShadowMan.EXE and his operator Mr. Dark, leading the plot into the next chronological installment, Mega Man Battle Network 2.[9] 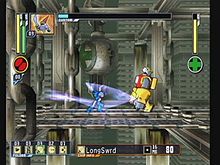 The player selects and uses a LongSwrd Battle Chip from the HUD at the bottom of the screen. The Custom Bar extends across the top.

Mega Man Network Transmission incorporates aspects of action and platforming games similar to other Mega Man series, while retaining the strategy and role-playing elements of the Battle Network series.[10][11] The player takes control of the protagonist Lan within the game's real world and his NetNavi MegaMan.EXE within its internet.[4] Unlike previous games in this series, Lan is restricted from moving location to location. Instead, the player uses a map screen with points of interest to travel to different levels.[10] Levels are opened up as the player progresses through the game, with a slight emphasis on linear progression, although MegaMan can diverge off-path at times. Levels typically end in a boss battle with another NetNavi. Combat takes place in real-time, with MegaMan given the ability to jump, slide, fire his default arm cannon, and dodge enemy attacks on a two-dimensional plane.[4][10][12]

Special abilities called "Battle Chips" are provided through a "Custom Bar" that slowly fills at the top of the screen. When the bar is full, the player can select up to five Battle Chips, which are provided from a folder of player-selected chips.[4] Ten random chips are available when the bar is full; a total of twenty can be used for each level excursion.[10][11][12][13] Battle Chips are used for dealing large amounts of damage to enemies, protecting and restoring the player's health, summoning other Navi's to MegaMan's aid, and for some platforming abilities. Certain chips can even be combined to be more effective.[10] Although Battle Chips are limited in quantity, they can be picked up from deleted enemies or can be purchased at shops when not exploring the internet. As in previous Battle Network games, items that upgrade MegaMan's maximum health, firing power, and other attributes can also be accessed.[4][13]

Mega Man Network Transmission was developed by Arika, who had previously worked on Capcom's Street Fighter EX series.[1][14] Producer Keiji Inafune revealed in an interview with Dengeki that after a string of PlayStation releases, the team chose to focus their development efforts of the Mega Man franchise for Nintendo consoles with the Battle Network series.[15] They felt that children who played the GBA handheld were beginning to show interest in the GameCube, and that the character was more suitable to a console related to the Nintendo Family Computer, where the franchise originated. Inafune stated that the developer wanted to "preserve the core of Rockman" by transcending the traditional action elements (i.e. running and jumping) for the current gaming hardware from the perspective of the role-playing series.[15] Network Transmission uses a cel-shaded animation style to match the Mega Man NT Warrior anime series that was airing in Japan during the game's development. Inafune explained that the team opted for an anime style with "eye-catching effects" in place of a more realistic look because he felt it the former would be more enjoyable.[15] The musical score for Network Transmission was co-composed by Shinji Hosoe, Ayako Saso, and Yousuke Yasui. No soundtrack has been licensed for release.[16]

Network Transmission was announced and on display for the first time at the Tokyo Game Show in September 2002.[14] The game was showcased at the Mega Man series 15th anniversary celebration event in Chiba Prefecture that December, while a playable version made appearances in January 2003 at the World Hobby Fair in Osaka and at the Capcom Gamer's Day event in Las Vegas.[17][18][19] The game was on display at the Electronic Entertainment Expo in Los Angeles during the summer between its Japanese and North American releases.[20]

Network Transmission has been met with mixed critical reception. The game currently holds a score of 67% on GameRankings.[21] A point of contempt for many critics was the game's difficulty level. Skyler Miller of G4 summarized, "Network Transmission is painfully difficult not because of any genuine challenge, but because of its cheap enemies, frustrating weapons setup, and unnecessary complications. For example, you can only save after beating a boss, which is common in the Mega Man series. It's tedious to have to wade your way through the relatively straightforward levels time and time again only to meet instant death against a boss."[24] GameSpy's Benjamin Turner felt that the difficulty level was unbalanced rather than too steep, and that once a player gains a foothold on the gameplay and collects enough Battle Chips and power-ups, the challenge subsides.[13] Reviewers for Eurogamer, IGN, and GameSpot all similarly agreed that the greatest difficulty is presented toward the game's start, particularly with its first few boss battles.[10][11][12]

Opinions on the visuals and audio in Network Transmission has been decidedly split. Turner found the music perfectly fitting, but stated, "You may also be disappointed that the graphics don't quite push the GameCube. They're generally okay, and even pretty a few times, but overall the visuals are a bit spartan."[13] Jeff Gerstmann of GameSpot described the backgrounds and animation as appropriate, that the Japanese voice acting matched the characters, and that the music was upbeat. However, he found the artstyle lacking in personality, the weapon effects and summons "understated", and the sound effects "underdeveloped".[10] IGN's Matt Casamassina was conversely impressed by the artstyle, backgrounds, and framerate, but disliked the graphics as a whole, proclaiming, "It's a brand new product, but it looks like it could have been released on PlayStation 1, or perhaps even on Super Nintendo."[11] Miller found the game's use of cel-shading useless and the titular protagonist "the weakest link of all, looking undefined, vague, and more than a little awkward".[24]

The game's integration of Battle Chips into the side-scroller genre was admired by some reviewers. Casamassina was entertained by discovering and capitalizing on which chips are useful against which enemies.[11] Turner was impressed by the random shuffling of chips in one's inventory and the instances of forced improvisation on the player's part.[13] Tom Bramwell of Eurogamer expressed satisfaction with having the needed chips at the right times, but admitted frustration with having to disarm oneself to organize them. He asserted, "Even glancing at what you might move to the top of the list involves sending the blue bomber's current chips back to the 'Folder', leaving you with a choice between edging forward with the paltry chargeable beam weapon and standing around waiting for your Custom bar to fill up again."[12]