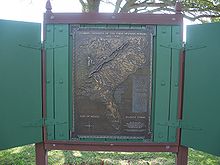 Beginning in the second half of the 16th century, the Kingdom of Spain established a number of missions throughout la Florida in order to convert the Indians to Christianity, to facilitate control of the area, and to prevent its colonization by other countries, in particular, England and France. Spanish Florida originally included much of what is now the Southeastern United States, although Spain never exercised long-term effective control over more than the northern part of what is now the State of Florida from present-day St. Augustine to the area around Tallahassee, southeastern Georgia, and some coastal settlements, such as Pensacola, Florida. A few short-lived missions were established in other locations, including Mission Santa Elena in present day South Carolina, around the Florida peninsula, and in the interior of Georgia and Alabama.

The missions of what are now northern Florida and southeastern Georgia were divided into main four provinces where the bulk of missionary effort took place. These were Apalachee, comprising the eastern part of the what is now the Florida Panhandle; Timucua, ranging from the St. Johns River west to the Suwanee; Mocama, the coastal areas east of the St. Johns running north to the Altamaha River; and Guale, north of the Altamaha River along the coast to the present-day Georgia Sea Islands. These provinces roughly corresponded to the areas where those dialects were spoken among the varying Native American peoples, thus, they reflected the territories of the peoples. Missionary provinces were relatively fluid and evolved over the years according to demographic and political trends, and at various times smaller provinces were established, abandoned, or merged together larger ones. There were also ephemeral attempts to establish missions elsewhere, particularly further south into Florida.

The first Spanish missions to the Indians of la Florida began soon after the founding of St. Augustine in 1565, carried forth by the Jesuits. Due to the hostility of the Indians, which resulted in the murder of several of the missionaries, the Jesuits withdrew from the mission field in la Florida in 1572. Franciscan friars entered into la Florida in 1573, but at first confined their activities to the immediate vicinity of St. Augustine. The Franciscans began taking their mission to the Guale and Timucua Indians along the Atlantic coast in 1587. Starting in 1606 the Franciscans expanded their mission efforts westward across Timucua territory, and by 1633 had established missions in Apalachee Province. The mission system functioned throughout the 17th century, but collapsed at the beginning of the 18th century after raids by English soldiers from the Province of Carolina and their Indian allies had depopulated all provinces.[1]

The mission buildings of la Florida were built with posts set into the ground. The walls were palmetto thatch, wattle and daub or plank, or left open. The floors were clay, and scholars believe the roofs were thatched. The church buildings in the missions averaged some 20 m by 11 m. Other buildings situated within a palisade included a convento to house the missionaries, a barracks for the soldiers, and often a separate kitchen.[2][3]

In the 17th century Guale, Mocama, Timucua, and Apalachee emerged as the major divisions of the mission system. These were roughly established along ethno-linguistic boundaries.

The Guale Province served the Guale, and covered what is now coastal Georgia and the Sea Islands north of the Altamaha River.[4] Later in the 17th century, Guale was sometimes referred to as extending southward and including the region otherwise known as Mocama.[5]

The Mocama Province included the coastal areas of southeastern Georgia and northern Florida from St. Simons Island south to St. Augustine, extending westward to approximately the distance of the St. Johns River in Florida.[5] It included some of the earliest missions to be established, and served the Mocama, a Timucuan-speaking group of the coastal areas. Important missions established in the Mocama Province were San Juan del Puerto, among the Saturiwa chiefdom, and San Pedro de Mocama, among the Tacatacuru.

The Timucua Province was initially established to serve the chiefdom known to the Spanish as the Timucua, now known as the Northern Utina, who spoke the "Timucua proper" dialect. Eventually, however, it absorbed several smaller Timucua-speaking provinces and became the largest of all the Florida mission districts. Following shortly after the success of the Mocama missions, the Spanish established missions among the Agua Fresca (Eastern Utina or Freshwater Timucua) along the middle St. Johns River, from roughly present-day Palatka south to Lake George. Similarly, the missions among the Potano, centered around what is now Gainesville, were considered part of the Potano Province, while missions to the Acuera, who lived around the Ocklawaha River, were part of the Acuera Province. All of these areas were eventually considered part of the larger Timucua Province, in some cases because native populations had declined to the point that they could no longer support multiple missions. At this stage the Timucua Province included the area between the St. Johns and Suwanee rivers. Later, the Yustaga Province, which served the Yustaga who lived to the east of the Suwanee as far as the Aucilla River, was added, and the Timucua province covered the majority of north central Florida.[6]

The Apalachee Province served the Apalachee people.[7] It occupied the easternmost part of what is now the Florida Panhandle, along the Gulf of Mexico coast from the Aucilla River to the Apalachicola River. There were other tribes in this area as well, such as the Apalachicola.

There were efforts to establish missions farther afield as well. There was briefly a mission to the Calusa of southwest Florida, San Antón de Carlos. There were missions centered at Santa Elena in present-day South Carolina until the settlement's abandonment in 1587. Later, the Spanish established one early mission among the Mayaca, a non-Timucuan speaking tribe south of the Agua Fresca, and resumed efforts among them in the late 17th century. This district, which became known as the Mayaca-Jororo Province, occupied an area just to the south of Lake George, on the upper (southern) St. Johns River.[8][9][10] The coastal area south of the Mocama Province and St. Augustine was known as La Costa; though this area had some Timucua speakers, it did not see much missionary activity, perhaps because it was less densely populated.[5] There were also a few missions established to the north and west of the Apalachee Province.[7]