5-Dehydroepiandrosterone (5-DHEA) is a 19-carbon endogenous[1] steroid hormone. It is the major secretory steroidal product of the adrenal glands[2] and is also produced by the gonads and the brain.[3] DHEA is the most abundant circulating steroid in humans.[4]

DHEA has been implicated in a broad range of biological effects in humans and other mammals. It acts on the androgen receptor both directly and through its metabolites, which include androstenediol and androstenedione, which can undergo further conversion to produce the androgen testosterone and the estrogens, including estrone, estradiol, and estriol.[5] DHEA is also a potent sigma-1 agonist.[6] It is considered a neurosteroid.[5]

Evidence is inconclusive with respect to if DHEA has an effect on strength in the elderly.[7]

DHEA supplementation has been studied as a treatment for Alzheimer's disease, but was not found to be effective.[8] Some small placebo-controlled randomized clinical trial studies have found long-term supplementation to improve mood and relieve depression[9] found that a 7-day course of DHEA (150 mg twice daily) improved episodic memory in healthy young men. In this study, DHEA was also shown to improve subjective mood and decrease evening cortisol concentration, which is known to be elevated in depression.[10] The effect of DHEA on memory appeared to be related to an early activation of the anterior cingulate cortex (ACC) and this was suggested to be due to neuronal recruitment of the steroid-sensitive ACC that may be involved in prehippocampal memory processing.

Consistent with this hypothesis are DHEAS data from several studies of military special operations units. In these studies, warfighters who exhibited higher levels of DHEA and higher DHEA/cortisol ratios during extreme stress were those who also exhibited superior hippocampal and prefrontal dependent cognitive abilities during stress.[11][12]

Since 2000, DHEA supplementation has been used in reproductive medicine in combination with gonadotropins as a way to treat female infertility. [16]The hormone is believed to act on the chromosomal integrity of eggs, creating healthier embryos and increasing the chances of a successful pregnancy. [17] A study released in 2010 from Tel Aviv University showed that women who took DHEA supplements prior to an infertility treatment were three times more likely to conceive than those who did not. [18] Additionally, studies conducted by the Center for Human Reproduction in New York found that women with poor ovarian reserve who were supplemented with DHEA four to 12 weeks prior to an IVF cycle had a 22% reduction in number of chromosomally abnormal embryos and a 50-80% reduction in miscarriages. [19] [20]

Cardiovascular disease and risk of death

A 1986 study found that a higher level of endogenous DHEA, as determined by a single measurement, correlated with a lower risk of death or cardiovascular disease.[21] However, a more recent 2006 study found no correlation between DHEA levels and risk of cardiovascular disease or death in men.[22] A 2007 study found the DHEA restored oxidative balance in diabetic patients, reducing tissue levels of pentosidine—a biomarker for advanced glycation endproducts.[23]

A 2005 study, measured serum DHEA in 206 men with type-2 diabetes, and found an inverse relationship between serum DHEA and carotid atherosclerosis in men. The authors say the study "supports the notion that DHEA, which is sold in increasing amount as a food supplement, is atheroprotective in humans, and that androgen replacement therapy should be considered for men with hypogonadism."[24]

A 2006 study supplemented DHEA to men of average 65 years of age, and found that the men experienced significant increases in testosterone and cGMP (Cyclic guanosine monophosphate), and significant decreases in low-density lipoprotein (LDL). The authors say that the "findings...suggest that chronic DHEA supplementation would exert antiatherogenic effects, particularly in elderly subjects who display low circulating levels of this hormone."[25][26]

A 2008 study in the Journal of the American Geriatrics Society, June 2008, measured serum DHEA in 940 men and women ranging from age 21 to 88, following them from 1978 until 2005. The researches found that low levels of DHEA-s showed a significant association with shorter lifespan and that higher DHEA-s levels are a "strong predictor" of longevity in men, even after adjusting for age, blood pressure, and plasma glucose. No relationship was found between serum DHEA and longevity for women during the study period. The study did not find a significant difference in longevity until the 15-year follow-up point, which the researchers note may explain why some past research that followed men for less duration found no relationship.[27]

"No reason to prescribe"

An anonymous 2002 review, in the French journal Prescrire, concluded: DHEA plasma levels are so low in most animals that they are difficult to measure, hindering studies on DHEA and aging. DHEA had not yet, at the time of writing, been linked to any specific health disorder. Side effects are linked to its androgenic effects, unfavorable lipid metabolism effects, and "possible growth-stimulating effect" on hormone dependent malignancies. "In practice, there is currently no scientific reason to prescribe DHEA for any purpose whatsoever."[28]

In the United States, DHEA or DHEAS have been advertised with claims that they may be beneficial for a wide variety of ailments. DHEA and DHEAS are readily available in the United States, where they are marketed as over-the-counter dietary supplements.[29] A 2004 review in the American Journal of Sports Medicine concluded that "The marketing of this supplement's effectiveness far exceeds its science."[30] Because DHEA must first be converted to androstenedione and then to testosterone in men, it has two chances to aromatize into estrogen - estrone from androstenedione, and estradiol from testosterone. As such, it is possible that supplementation with DHEA could increase estrogen levels more than testosterone levels in men.[citation needed]

As a hormone precursor, there has been a smattering of reports of side effects possibly caused by the hormone metabolites of DHEA.[31][32] Some of these include possibly serious cardiovascular effects such as heart palpitations.[33]

Dehydroepiandrosterone sulfate (DHEAS) is the sulfated version of DHEA. This conversion is reversibly catalyzed by sulfotransferase (SULT2A1) primarily in the adrenals, the liver, and small intestine. In the blood, most DHEA is found as DHEAS with levels that are about 300 times higher than those of free DHEA. Orally ingested DHEA is converted to its sulfate when passing through intestines and liver. Whereas DHEA levels naturally reach their peak in the early morning hours, DHEAS levels show no diurnal variation. From a practical point of view, measurement of DHEAS is preferable to DHEA, as levels are more stable.[citation needed]

Production of DHEA from Cholesterol 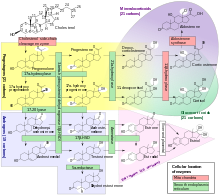 Comprehensive overview of Steroidogenesis, showing dehydroepiandrosterone at left among the androgens.

DHEA is produced from cholesterol through two cytochrome P450 enzymes. Cholesterol is converted to pregnenolone by the enzyme P450 scc (side chain cleavage); then another enzyme, CYP17A1, converts pregnenolone to 17α-Hydroxypregnenolone and then to DHEA.[34]

DHEA can be understood as a prohormone for the sex steroids. DHEAS may be viewed as buffer and reservoir. As most DHEA is produced by the zona reticularis of the adrenal cortex, it is argued that there is a role in the immune and stress response.[who?]

As almost all DHEA is derived from the adrenal glands, blood measurements of DHEAS/DHEA are useful to detect excess adrenal activity as seen in adrenal cancer or hyperplasia, including certain forms of congenital adrenal hyperplasia. Women with polycystic ovary syndrome tend to have elevated levels of DHEAS.[35]

A bill has been introduced, in March 2009, in the U.S. Senate (S. 641) that attempts to classify DHEA as a controlled substance under the category of anabolic steroids. The sponsor is Charles Grassley (R-IA). The cosponsors are Richard Durbin (D-IL), and John McCain (R-AZ).[41] This bill was referred to the Senate Judiciary Committee. In December 2007, Charles Grassley introduced the "S. 2470: Dehydroepiandrosterone Abuse Reduction Act of 2007," in an attempt to amend the Controlled Substances Act to make "unlawful for any person to knowingly selling, causing another to sell, or conspiring to sell a product containing dehydroepiandrosterone to an individual under the age of 18 years, including any such sale using the Internet," without a prescription. Only civil (noncriminal) penalties are provided. The bill was read twice and referred to the Senate Judiciary Committee, where it died.[42]

In Canada, a prescription is required to buy DHEA.[43]

DHEA is a prohibited substance under the World Anti-Doping Code of the World Anti-Doping Agency,[44] which manages drug testing for Olympics and other sports. In January 2011, NBA player O.J. Mayo was given a 10-game suspension after testing positive for DHEA. Mayo termed his use of DHEA as "an honest mistake".[45] Mayo is the seventh player to test positive for performance-enhancing drugs since the league began testing in 1999. Rashard Lewis, then with the Orlando Magic, tested positive for DHEA and was suspended 10 games before the start of the 2009-10 season.[46]

Fluasterone is a synthetic derivative of DHEA.

Some in vitro studies have found DHEA to have both antiproliferative and yet also apoptotic effect on cancer cell lines.[47][48][49] The clinical significance of these findings, if any, is unknown. Higher levels of DHEA and other endogenous sex hormones are strongly associated with an increased risk of developing breast cancer in both pre- and postmenopausal women.[50][51]