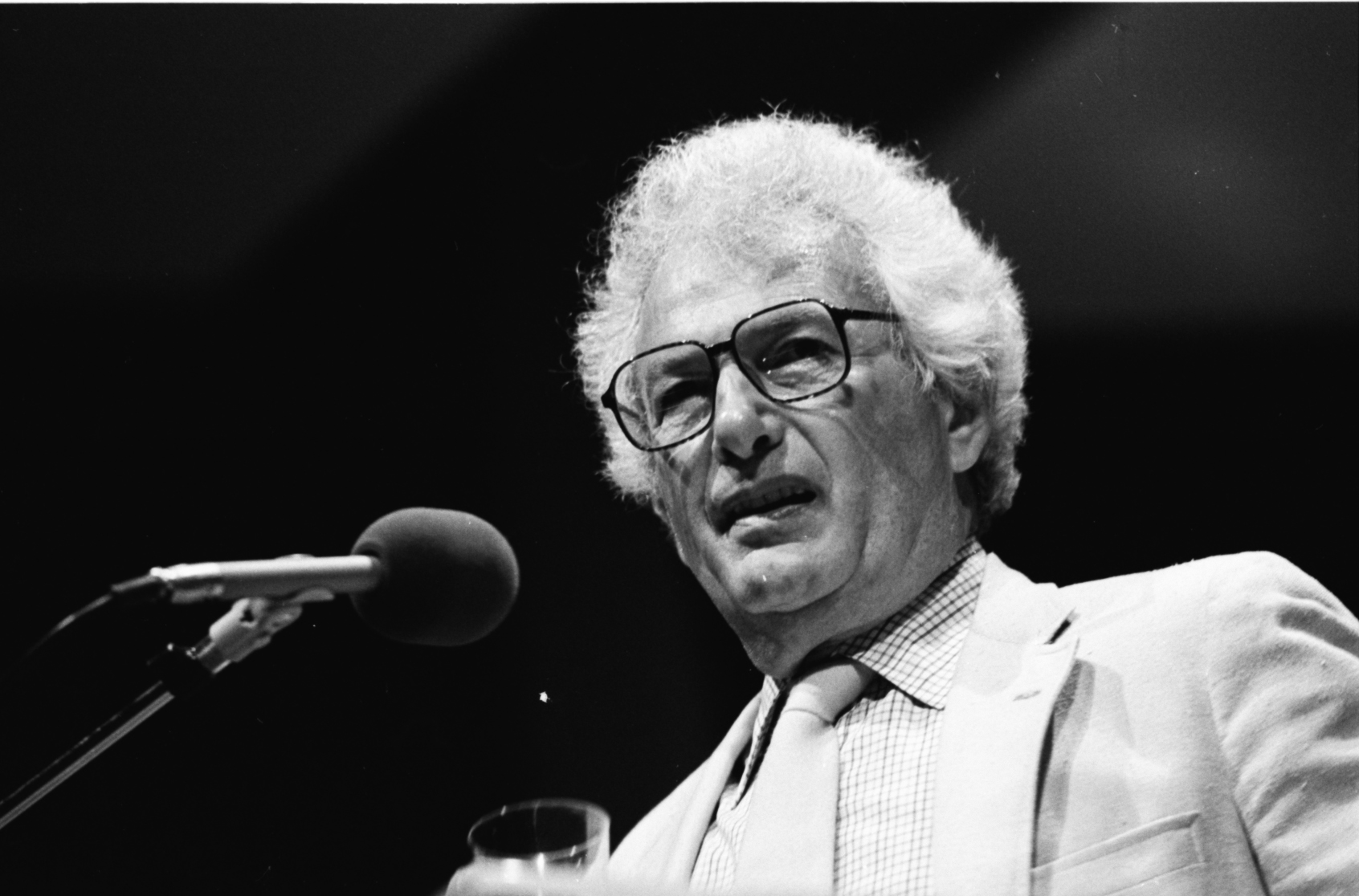 Joseph Heller (May 1, 1923 – December 12, 1999) was an American novelist, writer and playwright. He wrote the influential novel "" about American servicemen during . It was this work whose title became the term commonly used to express absurdity in choice and frustration with bureaucratic insanity.

Heller is widely regarded as one of the best post-World War II satirists. Although he is remembered mostly for "Catch-22", his other works center on the lives of various members of the and remain exemplars of modern satire.

Joseph Heller was born in in , the son of poor Jewish parents from Russia.

After the war, Heller studied English at the and on the .

While sitting at home one morning in 1953, Heller thought of a hook, "It was love at first sight. The first time he saw the chaplain, Someone fell madly in love with him." Within the next day, he began to envision the story that could result from this beginning, and invented the characters and the plot, as well as the tone and form that the story would eventually take. Within a week, he had finished the first chapter and sent it to his agent. He did not do any more writing for the next year, as he planned the rest of the story. The initial chapter was published in 1955 as "Catch-18", in Issue 7 of "New World Writing."

Although he originally did not intend the story to be longer than a , Heller was able to add enough substance to the plot that he felt it could become his first . When he was one-third done with the work, his agent, Candida Donadio, began submitting the novel to several publishers. Heller was not particularly attached to the work, and decided that he would not finish it if publishers were not interested. The work was never rejected, and was soon purchased by , who gave him US $750 and promised him an additional $750 when the full manuscript was delivered. Heller missed his deadline by four to five years, but, after eight years of thought, delivered the novel to his publisher.

The finished novel describes the wartime experiences of Army Air Corps Captain . Yossarian devises multiple strategies to avoid combat missions, but the military bureaucracy is always able to find a way to make him stay.

Just before publication, the novel's title was changed to "Catch-22" to avoid confusion with 's new novel, "".

The movie rights to the novel were purchased in 1962, and, combined with his royalties, made Heller a millionaire. The film, which was directed by and starred , and , was not released until 1970.

Shortly after "Catch-22" was published, Heller thought of an idea for his next novel, which would become "". He did not act on this idea for two years, however. During that time period he focused on scripts, completing the final screenplay for the movie adaptation of 's "", as well as a television comedy script that eventually aired as part of "". He also completed a play in only six weeks, but spent a great deal of time working with the producers as it was brought to the stage.

In 1969, Heller wrote a play called "". The play delivered an anti-war message while discussing the . It was originally produced by the Repertory Company of the Yale Drama School, with in the starring role. After a slight revision, it was published by and then debuted on Broadway, starring .

Heller's follow-up novel, "" was finally published in 1974. Although critics were enthusiastic about the book, book buyers were not.Heller wrote an additional four novels, each of which took him several years to complete. One of his later novels, "," revisited many of the characters who had been featured in "Catch-22" as they adjusted to post-war New York. All of the novels sold respectably well, but could not duplicate the success of his debut. Told by an interviewer that he had never produced anything else as good as "Catch-22", Heller famously responded, "Who has?"

Heller did not begin work on a story until he had envisioned both a first and last line. The first sentence usually appeared to him "independent of any conscious preparation". In most cases, the sentence did not inspire a second sentence. At times, he would be able to write several pages before giving up on that hook. Usually, within an hour or so of receiving his inspiration, Heller would have mapped out a basic plot and characters for the story. When he was ready to begin writing, he would focus on one paragraph at a time, until he had three or four handwritten pages, which he would then spend several hours reworking.

Heller maintained that he did not "have a philosophy of life, or a need to organize its progression. My books are not constructed to 'say anything.'" Only when he was almost one-third finished with the novel would he gain a clear vision of what it should be about. At that point, with the idea solidified, he would rewrite all that he had finished and then continue to the end of the story.

On Sunday, December 13, 1981, Heller was diagnosed with , a debilitating syndrome that was to leave him temporarily paralyzed. He was admitted to the Intensive Care Unit of Mount Sinai Medical Hospital the same day harv|Heller|1986|pp=23-34, and remained there, bedridden, until his condition had improved enough to permit his transfer to the Rusk Institute of Rehabilitation Medicine, which occurred on January 26, 1982 harv|Heller|1986|pp=170-174. His illness and recovery are recounted at great length in the autobiographical "No Laughing Matter" harv|Heller|1986, which contains alternating chapters by Heller and his good friend . The book reveals the assistance and companionship Heller received during this period from a laundry list of his prominent friends—, , and among them.

Heller eventually made a substantial recovery. In 1984, while in the process of divorcing his wife of 35 years, he met Valerie Humphries, the nurse who had helped him to recover, and later married her.

Heller returned to St. Catherine's as a visiting Fellow, for a term, in 1991 and was appointed an Honorary Fellow of the college. [ [http://www.stcatz.ox.ac.uk/the_college_pages/catz_people.htm Catz People] ] In 1998, he released a memoir, "Now and Then: From Coney Island to Here," in which he relived his childhood as the son of a deliveryman and offered some details about the inspirations for "Catch-22".

He died of a at his home in December 1999, shortly after the completion of his final novel, "".Fact|date=August 2007 On hearing of Heller's death, his friend said, "Oh, God, how terrible. This is a calamity for American letters."

In April 1998, Lewis Pollock wrote to "The Sunday Times" for clarification as to "the amazing similarity of characters, personality traits, eccentricities, physical descriptions, personnel injuries and incidents" in "Catch-22" and a novel published in England in 1951. The book that spawned the request was written by and titled "" in Britain and "" in the United States. Falstein's novel was available two years before Heller wrote the first chapter of "Catch-22" (1953) while he was a student at . "The Times" stated: "Both have central characters who are using their wits to escape the aerial carnage; both are haunted by an omnipresent injured airman, invisible inside a white body cast". Stating he had never read Falstein's novel, or heard of him, [ [http://www.findarticles.com/p/articles/mi_qn4196/is_19980428/ai_n10413175] (link broken)] Heller said: "My book came out in 1961 [;] I find it funny that nobody else has noticed any similarities, including Falstein himself, who died just last year"("", April 27, 1998).