Cergy (French pronunciation: [sɛʁ.ʒi]) is a commune in the northwestern suburbs of Paris, France. It is located 27.8 km (17.3 mi) from the center of Paris, in the "new town" of Cergy-Pontoise, created in the 1960s, of which it is the central and most populated commune.

Although neighboring Pontoise is the official préfecture (capital) of the Val-d'Oise département, the préfecture building and administration, as well as the department council (conseil général), are located inside the commune of Cergy, which is regarded as the de facto capital of Val-d'Oise. The sous-préfecture building and administration, on the other hand, are located inside the commune of Pontoise. 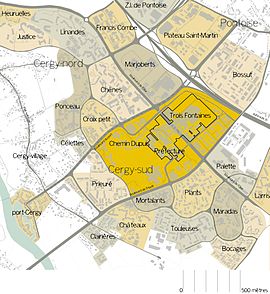 Map of the quarters of Cergy.

Cergy is the chief town of two cantons: 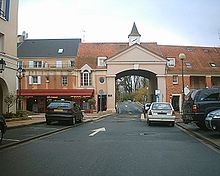 Port Cergy is a marina on the River Oise at pk 9. The site comprises both housing and recreational yachts as well as a boating school. The marina can hold 103 ships ranging 5 to 22m long and. The northern part of the site is reserved for restaurants and shops and have been built around a small bassin.

Ham is a small village to the south of Cergy. The village used to be part of the Sergentery and then commune of Neuville-sur-Oise but has since been amalgamated in the commune of Cergy. On its territory is the outdoor leisure centre 'Base de Loisirs de Cergy-Neuville'. 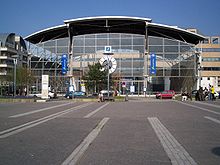 The bus company STIVO provides 17 lines of buses to travel within the agglomeration of Cergy. 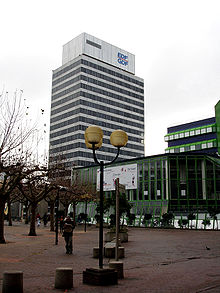 The town was used as a filming location for Henri Verneuil's film I... comme Icare released in 1979, starring Yves Montand. The EDF-GDF tower designed by architect Renzo Moro is the building from which the shots were fired to assassinate president Marc Jarry. The country that the movie depicts is not named, although the United States is perhaps suggested. The filmmakers chose the modern and innovative architecture of the new city to avoid depicting any particular country.[3]