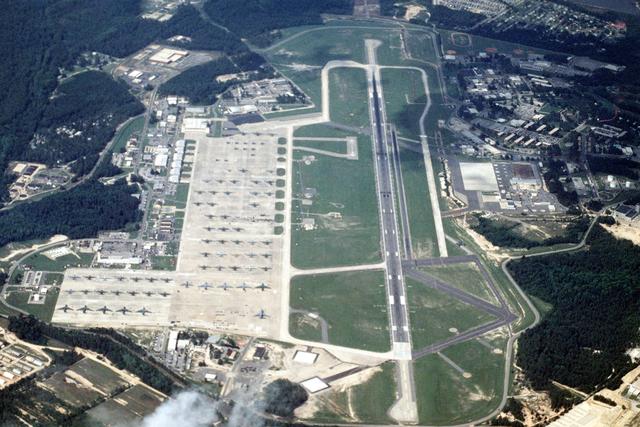 Pope Air Force Base airport codes|POB|KPOB|POB is a base located 12 miles (19 km) northwest of the of Fayetteville, in Cumberland County, , . It is the home of the .

USAF Missions at Pope AFB range from providing airlift and close air support to American armed forces, to humanitarian missions flown all over the world. Pope AFB particularly provides air transportation for the US Army's and which are based at neighboring Fort Bragg, North Carolina.

The 2d AS flies the Lockheed C-130E Hercules. All aircraft are identified with a blue/green Pope tail stripe. The C-130 is recognized as the workhorse of the Air Force airlift fleet, capable of delivering troops, supplies and equipment directly to the battlefield in all weather conditions.

In 1918, Congress established Camp Bragg, an Army field artillery site named for the Confederate General . An aviation landing field was added a year later. The War Department officially established "Pope Field" in 1919, and it ranks as one of the oldest installations in the Air Force.

Pope AFB is named after First Lieutenant Harley Halbert Pope who was killed on , when the Curtiss JN-4 Jenny he was flying crashed into the Cape Fear River. After five years, Camp Bragg became a permanent Army post renamed Fort Bragg.

Original operations included photographing terrain for mapping, carrying the mail, and spotting for artillery and forest fires. Observation planes and observation balloons occupied Pope Field for the first eight years. In December 1927, Pope Field played a role in the development of tactics that would prove critically important in shortening .

The 1930s saw the first major expansion of the facilities at Pope. In 1935, Pope Field hosted 535 aircraft in one day as the practiced large scale operations along the East Coast. In 1940, paved runways replaced dirt open fields. Much of the parking ramp space remained unpaved until after World War II.

The tempo of activities at Pope quickened with the outbreak of World War II. During the 1940s, the base swelled as a troop carrier training site, and with the institution of paratrooper training at Camp Bragg, Pope began putting the “Air” in “Airborne.” Throughout the war, air and ground crews trained here with Army airborne units in preparation for airborne and aerial resupply missions.

The 10th TRG was deactivated on and the host unit at Pope was the 4415th Air Base Group. The base primary mission dealt with training Forward Air Controllers for the This training was conducted by the following operational units:

On , Ninth AF turned Pope over to the 464th Troop Carrier Wing, which specialized in tactical airlift operations, which transferred from Lawson AFB, Georgia. Known operational squadrons and tail codes (after 1966) of the 464th were:

The 464th (later redesignated Tactical Airlift Wing on ) provided tactical airlift of troops and cargo, participated in joint airborne training with Army forces, and took part in tactical exercises in the United States and overseas. The wing provided aeromedical airlift and flew humanitarian missions as required. Until it was inacivated, the 464th usually had two or more tactical squadrons deployed overseas at any one time, supporting airlift operations in , Europe, the , the , and .

During its time at Pope, a major period of facility expansion occurred. The main runway, the taxiways, and the ramp were all expanded to support the 464th’s Fairchild C-119 "Flying Boxcar"s operations. During the 1950s and 1960s, aircraft upgrade was the primary trend at the North Carolina installation. The Fairchild C-123 Provider started replacing the C-119 in 1958, and in 1963, the first C-130 Hercules arrived, appropriately named “The North Carolina.”

In August 1971, the 464th inactivated and the 317th Tactical Airlift Wing administratively moved to Pope AFB from Lockbourne AFB, . Known operational squadrons and tail codes of the 317th were:

The 317th TAW flew the C-130E aircraft. After June 1972, the squadron tail codes were standardized with "PB", reprsenting (Pope/Bragg).

As America became involved in the , the need to train large numbers of aircrews to fully use the unique capabilities of the C-130 led to the establishment of an aircrew replacement training unit. The mission of the 317th was to perform C-130 replacement crew training support for .

The drop zones, low-level routes, and dirt landing zones at Fort Bragg became familiar to many men bound for . The training gained in operating in the North Carolina area immeasurably improved aircrew preparedness for combat duty. The wing was a pioneer in the use of adverse weather aerial delivery system (AWADS) equipment in active combat operations in Southeast Asia, and after the end of American involvement, trained European-based aircrews in those same techniques.

During the Vietnam War, Pope was the destination for the bodies of servicemen killed in Southeast Asia. When identification was confirmed, the bodies were sent to their hometowns or the appropriate military cemeteries for burial. [ Clancy, Tom. "Without Remorse." Putnam/Berkley paperback, 1994. pp.179-180 of Berkley ed.]

On the took responsibility for tactical airlift and assumed command of Pope with all of its assigned units. Under MAC, the two-digit tail code designation of the 317th's aircraft was removed.

On the 317th MAW was reassigned to and the wing was redesignated the 317th Operations Group as part of the new 23d Composite Wing (23d Wing) at Pope. On the 317th OG was inactivated. As part of the deactivation, its operational squadrons were dissolved as follows:

The collapse of the in 1991 and the end of tensions led senior defense planners to conclude that the structure of the military establishment which had evolved during the Cold War years was not suited to the new world situation. Senior planners reviewed numerous options before agreeing on the final conclusion &ndash; a merger of most strategic and tactical air resources and a reorganization of the Military Airlift Command (MAC). In addition, the number of Air Force wings was to be reduced by about one-third to reflect the financial constraints of the post Cold War environment.

These changes led to Pope Air Force Base being transferred to the new upon its activation on . Also, the 317th TAW was blended into the new 23d Wing on when the 23d Fighter Wing at was transferred to Pope after England's 91 closing.

Operational squadrons of the 23d Wing at Pope were:

In December 1992, C-130s from the 2d Airlift Squadron deployed to , , to participate in Operation PROVIDE RELIEF. The aircraft and crews delivered tons of food and other relief supplies to small airstrips throughout . 23d Wing Flying Tiger C-130s were also been tasked to assist in other humanitarian relief efforts, to include in . They also airdropped relief supplies into Bosnia-Herzogovina and flew relief missions into for more than 28 months.

On , two 23d Wing aircraft, an F-16 and a C-130, collided in the base's landing pattern. After the two crewmembers of the F-16 ejected from their damaged fighter, the unmanned aircraft crashed into an aircraft parking ramp and hit a transport aircraft parked on the ramp. The resulting fireball and flaming wreckage killed 24 paratroopers who were waiting nearby to load the transports and injured almost 100 more paratroopers in what is known as the .

In September 1994, 23d Wing Flying Tiger C-130s participated in what was to be the largest combat personnel drop since World War II, Operation UPHOLD DEMOCRACY. They were to assist in dropping more than 3,000 paratroopers from the onto Airport, . The invasion force was recalled at the last minute after word that the Haitian president had resigned upon hearing that the aircraft were on their way. The 75th Fighter Squadron's A-10s were also involved in UPHOLD DEMOCRACY. The squadron deployed their aircraft to , , where they were scheduled to launch close air support operations for the invasion force before recovering in .

The first operational deployment of a composite wing happened in October 1994, when i troops began massing near the ti Border. Within 72 hours, 56 aircraft and 1,500 people deployed to the Persian Gulf region for Operation VIGILANT WARRIOR. Eventually, the 75th Fighter Squadron redeployed to , Kuwait, becoming the first U.S. fixed-wing aircraft to be stationed in that country since the end of the .

The 23d Wing won its fifth for the period of through . On , the 23d Wing was deactivated and the C-130s and Pope Air Force Base were realigned to under the 43d Airlift Wing designation.

On the same day, the 23d Fighter Group was activated at Pope Air Force Base as a tenant unit aligned under the 347th Wing at , Georgia remaining in Air Combat Command. The 74th Fighter Squadron, 75th Fighter Squadron, 23d Operations Support Squadron, and the 23d Maintenance Squadron remained part of the group.

The 23rd Fighter Group rejoined the 23rd Wing in a ceremony held on at Pope. The group relocated to Georgia as a result of BRAC 2005. On , the last three of the A-10 Thunderbolt II aircraft left for Moody AFB.

In the 2005 Base Realignment and Closure Plan, the Department of Defense stated its plan to realign Pope AFB, NC. The plan calls for moving the ’s 36 II (Warthogs) to Moody AFB, Georgia and the 43d Airlift Wing's 25 C-130E's to Little Rock AFB, Arkansas. The base would then be absorbed by a currently expanding Fort Bragg, becoming "Pope Army Airfield".

In addition, several Army units are to be transferred to the current Pope AFB, including the headquarters for both the , and the United States Army Reserve Command. These units are currently located at , which is to be closed. Also the headquarters of US Forces Command VIP Explosive Ordnance Support is to be moved to Pope from its current location of , which is also to be closed. Also, Fort Jackson, Fort Eustis, and Fort Lee are all to be realigned during which all of the mobilization processing functions located at these bases are to be relocated to Pope, creating "Joint Pre-Deployment/Mobilization Site Bragg/Pope".

However the Air Force presence at Pope will not totally disappear since several Air Force units will remain in place (3d Aerial Port Squadron, 18th Air Support Operations Group, 14th Air Support Operations Squadron, , and Detachment 1 of the 373d Training Squadron, among others) and Pope's airlift capability will be taken over by the which was BRAC'd from General Mitchell IAP-ARS in Milwaukee, Wisconsin [related stories: http://www.afrc.af.mil/news/story.asp?id=123023512 and http://www.afrc.af.mil/news/story.asp?id=123056630] . The 440th Airlift Wing will be the first Air Force Reserve Wing to have an active duty associate squadron (the 2nd Airlift Squadron) that will share the airlift mission with the 95th Airlift Squadron (the 440th AW's flying squadron). The new association will have 16 C-130's. [See here for more on BRAC: http://www.af.mil/brac/northcarolina.asp]