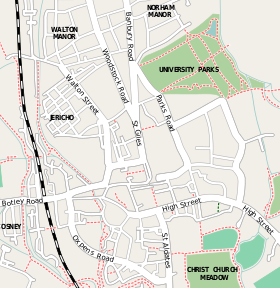 New College School is an independent preparatory school for boys in Oxford. It was founded in 1379 by William of Wykeham to provide for the education of 16 choristers for the chapel of New College, Oxford.

It is the oldest of Oxford's three choral foundations, ahead of Magdalen College School (1480) and Christ Church Cathedral School (1546).

The youngest pupils at New College School are those who begin at the age of 4 in the pre-prep department; the oldest pupils are those in Year 8 (12-13) who are prepared for Common Entrance and Scholarship examinations to senior schools. The School has a healthy tradition of sending pupils – often with an academic, music, or sport scholarship – to some of the country’s leading secondary schools. In recent years NCS pupils have been awarded places and prestigious scholarships at, among others: Magdalen College School, Abingdon School, St Edward's School, Eton College, Radley College, Rugby School, Marlborough College, the Oratory School, Winchester College, Westminster School, and Leckford Place/d’Overbroecks.

The School currently has approximately 140 pupils and 20 full-time teaching staff. Class sizes average between 10 and 15 pupils. The Year 8 Scholarship class, in which pupils experience high-level tutorial-style teaching, averages between 3 and 6 pupils. The combination of small class sizes and committed teaching staff allows for education tailored to the needs of each and every pupil. The Headmaster is Mr Robert Gullifer, a former Choral Scholar at St Catharine’s College Cambridge, and previously Deputy Headmaster of Bristol Grammar School.

Choristers of the Choir of New College Oxford

Approximately one in seven pupils at NCS is a chorister in the Choir of New College Oxford. Potential choristers are auditioned when they are in Year 3. Successful candidates (usually four or five per year) become ‘probationers’ in Year 4 during which time they and their families become familiar with the timetable and demands of life as a chorister. In Year 5, upon successful completion of the necessary musical training, probationers are usually ‘surpliced’ and become full choristers. It is expected that they remain full choristers until they leave New College School in the Summer of Year 8. Choristers have a proud tradition of earning music scholarships or exhibitions to their secondary schools.

The life of a chorister is a demanding but a fulfilling and well-supported one. Choristers sing in services in New College Chapel, usually five or six times a week, during University term. On top of their normal school work, during the week choristers also have two rehearsals a day (except on Wednesdays), plus extra rehearsals on weekends. It is one of the famous sights of Oxford to see the choristers in gowns and ‘squares’ (mortarboards) processing the short distance between New College School and New College itself. In College the choristers receive an unrivalled musical education from the Organist, Professor Edward Higginbottom, and his assistant, Steven Grahl. There are also two specially-designated ‘chorister tutors’ who, supported by the rest of the school staff, see to the choristers’ safety and personal well-being.

As part of the choir, choristers also participate in extra concerts, university events, CD recordings, broadcasts, and tours. In recent years the choir has toured to: Cyprus, Brazil, Australia, Luxembourg, Malta, the Czech Republic, Poland, Germany, France, Italy, Belgium, Switzerland, and the Netherlands. Closer to home, choristers have sung at: the Royal Festival Hall, the Queen Elizabeth Hall, the Sheldonian Theatre Oxford, the Barbican, Dorchester Abbey, King’s College Chapel Cambridge, Hampton Court, at the Spitalfields, Bournemouth, and Brighton Festivals, and in Promenade Concerts at the Royal Albert Hall. The choir frequently can be heard on BBC Radio 3 (including Evensong recordings) and on Classic FM. Recordings can be purchased from the Choir of New College website (link below).

Open days for potential choristers are held throughout the year.

New College School was founded in November 1379 by William of Wykeham, Bishop of Winchester, as part of the foundation of the College of St Mary of Winchester in Oxford (commonly called New College Oxford). Wykeham provided for sixteen choristers, alongside ten chaplains and three clerks, to participate in services to the glory of God and to pray for his soul. In 1394 the College started to pay for an informator choristarum to teach the choristers singing and grammar.

Since its foundation the School has had a peripatetic existence and it has varied in size according to the fortunes and demands of history. In the 1620s we know that choristers were accommodated on the site of New College itself as the attic between the hall and the kitchen was opened up for this purpose. They were taught in a schoolroom between the Chapel and the Cloisters, although this was disrupted during the 1640s when – faced with civil war – the Cloisters became a powder magazine. The boys predictably were distracted by this development; Anthony Wood, a pupil at the school, noted that they were of ‘a longing condition to be one of the train, that they could never be brought to their books again’. Nonetheless the choristers were moved to former servants’ quarters at the east end of the Hall which Wood called a ‘dark, nasty room and very unfit for such a purpose’. It was also during this period that New College School was mentioned in John Aubrey's famous "Brief Life" of Thomas Hobbes. In the late seventeenth century the vestry and song-room were refitted to accommodate one hundred or so new boys. This marked the moment at which the School, as today, educated both choristers and non-choristers.

In 1694, faced with this sudden increase in numbers, the School moved outside New College itself, to the Congregation House at St Mary’s. It was during this period that the boys were taught by one of the School’s most notable Masters, James Badger. Badger was at the School for twenty-three years and he became (according to one manuscript in the Bodleian Library) ‘one of ye most famous Schoolmasters in England. Several Heads and Fellows of Colleges in this University had been his Scholars’. He, like many of the School’s tutors past and present, was also a published academic.

The School roll of 1737-8 recorded 117 boys at the School. By the end of the eighteenth century sufficient space had been found in College for the boys, and they moved back, though they were now based in the south undercroft. They moved again in the mid-nineteenth century, to two nearby houses – 26 and 28 Holywell Street – before moving again at the turn of the twentieth century to 6 New College Lane and 19 Holywell Street. The School’s wanderings ceased in 1903, however, when the land of its current site was purchased from Merton College. From this date the School’s buildings have grown and been refurbished. The most recent addition was made in 2007: a state-of-the-art gym, art studio, and music technology suite commensurate with the School’s pre-eminent role in the musical life of the country.

Links with the University of Oxford

New College School has strong links with the University of Oxford. The School’s Chair of Governors is the Warden of New College Oxford (currently Professor Sir Curtis Price). Choristers frequently sing at University occasions and previously the School has provided the Chancellor’s Page for Encaenia ceremonies. Pupils at the School also enjoy close geographical proximity to College buildings, galleries, and events. Each Wednesday every member of the School attends a service in New College Chapel, usually presided over by the College Chaplain. University figures often are willing to aid with NCS pupils’ education. One of Merton College’s Visiting Research Fellows, for example, recently held a Literature Masterclass with Year 8 pupils and a British Academy Research Fellow based at Somerville College judged the Upper School’s Poetry Competition.