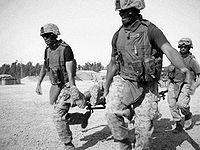 US Marines transport a non-ambulatory patient via litter, outside of Fallujah, Iraq in 2006 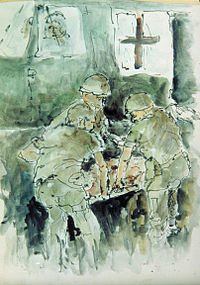 Waiting to Lift Off by James Pollock, Vietnam Combat Artists Program, CAT IV, 1967. Courtesy of National Museum of the U. S. Army.

Casualty evacuation, also known as CASEVAC or by the callsign Dustoff, is a military term for the emergency patient evacuation of casualties from a combat zone. Casevac can be done by both ground and air. Casevacs by air today are almost exclusively done by helicopter, a practice begun on a small scale toward the end of World War II; before that, STOL aircraft, such as the Fieseler Fi 156 or Piper J-3 were used. Casevac aircraft are a non standardized and non dedicated vehicle, that does not necessarily have en route care which is used to get a casualty back to another location where they can be treated by professional medical staff.

The primary difference between a CASEVAC and a medical evacuation (MEDEVAC) is that a MEDEVAC uses a standardized and dedicated vehicle providing en route care. On the other hand, CASEVAC uses non standardized and non dedicated vehicles that do not provide en route care. The service exists to transport casualties that are in dire need for evacuation from the battlefield and do not have time to wait on a MEDEVAC, or where a MEDEVAC is unable to get to the casualty. MEDEVAC aircraft and ground transport are mandated by the Geneva Convention to be unarmed and well marked. Firing on "clearly marked and identified" MEDEVAC vehicles would be considered a war crime under Article II of the Geneva Convention, in the same sense as firing on a Hospital Ship would be a war crime. CASEVAC transport are allowed to be armed since they are normally used for other purposes but carry no penalties for engagement by hostile forces. So in a sense, MEDEVAC transports are dedicated aircraft to transport causalities, CASEVAC is any transport used to move battlefield casualties.

"Dust Off" was the tactical call sign for medical evacuation missions first used in 1963 by Major Lloyd E. Spencer, Commander of the U. S. Army 57th Medical Detachment (Helicopter Ambulance). The name lasted the rest of the war. Typically Air ambulances would lift wounded soldiers to a hospital setting in less than an hour after being wounded. Flying into an active landing zone to pick up wounded was a dangerous job. Peter Dorland and James Nanney wrote in Dust Off: Army Aeromedical Evacuation in Vietnam, ". . .slightly more a third of the aviators became casualties in their work, and the crew chiefs and medical corpsmen who accompanied them suffered similarly. The danger of their work was further borne out by the high rate of air ambulance loss to hostile fire: 3.3 times that of all other forms of helicopter missions in the Vietnam War."[1]

All members of the US Armed Forces today are trained in some form of basic first aid. While lacking advanced life saving equipment and medical personnel in regular vehicles, all personnel today enter the combat zone with an Improved First Aid Kit (I.F.A.K) [2] on their equipment. The I.F.A.K has basic medical supplies such as bandages, a tourniquet, and QuikClot gauze. Most units have stretchers and burn blankets in their vehicles.

In the U.S. Military, the highest level of medical care available when being transported by a CASEVAC vehicle is from U.S. Navy Hospital Corpsmen. These personnel are trained to stabilize patients during the most common combat related life-threatening situations, such as tension pneumothorax or severe bleeding. Corpsmen lack equipment and training for any unusual or complex medical emergencies but are trained to stabilize their patients until they reach a shock trauma unit or CASH. Lately (beginning in Iraq 2004) the conditions of Casevacs have improved tremendously as the Marines and Navy Corpsmen have included intensive care flight nurses and or flight surgeons on some flights to complement the treatment of the patients. Casevac's taken over most of the point-of-injury emergency transports (Casevac). Marines and Corpsmen have created dedicated units such as HMM-161 to perform the Casevac missions as well as their usual tasks. A large percentage of Marines and soldiers in the U.S. Military are trained to be combat lifesavers.

Soldiers can now be remotely monitored using sensors built into their shirts or by wearing a fabric belt around their chest Remote Physiological Monitoring. This type of system can transmit the vital signs and physical status ( laying down, walking, running) to a remote medic.

In Australian military terminology, a CASEVAC refers to the evacuation of a small number of troops, usually just one.