DOSAAF (Russian: ДОСААФ) was a paramilitary society in the Soviet Union, Voluntary Society for Cooperation with the Army, Aviation, and Fleet (Russian: Добровольное Общество Содействия Армии, Авиации и Флоту). The society was preserved in a number of post-Soviet Republics, e.g., in Russia and Belarus. The name is changed in some of them, e.g., in Ukraine the counterpart is "Society of Assistance to Defense of Ukraine", and in Russia in December, 1991 it was reformed into the Russian Defence Sports-Technical Organization Российская оборонная спортивно-техническая организация - РОСТО. In December 2009 РОСТО was renamed DOSAAF Russia.

The stated goal of the society was "patriotic upbringing of the population and preparation of it to the defense of the Motherland". Among the means in achieving these goals was the development of paramilitary sports. Initially, an important goal was financial support of Soviet military, by means of membership fees, subscriptions, lotteries, and donations. At the same time, ordinary sports were also supported within the framework of DOSAAF facilities: sports halls, stadiums, swimming pools. 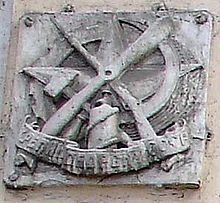 The goal of the society was preparation of reserves for armed forces. Soon it has become a powerful militarised organization, with its own aerodromes, radio clubs, parachute towers and firing ranges. It became prestigious and romantic among the youth to earn badges of "Voroshilov Sharpshooter" (Ворошиловский стрелок), Voroshilov Horse Rider (Ворошиловский всадник), Distinguished Parachute Jumper, etc. Gradually, OSOAVIAKhIM turns into a kind of back-up army training, its courses including such advanced disciplines as tactics, topography and armament. Unlike usual draft, a person could join OSOAVIAKhIM as early as at the age of 14. By 1941, the head count of OSOAVIAKhIM was estimated by 13 mln.

OSOAVIAKhIM supported a number of research programs for airplanes, airships, and stratospheric balloons, but after the crash of Osoaviakhim-1 record-setting balloon the latter program was taken over by the Air Forces. In 1931, Sergey Korolev's rocket research organization, GIRD, was originally part of OSOAVIAKhIM.

Like with many other things in the late Soviet Union, the word "voluntary" actually meant "partially obligatory". For example, every member of Komsomol had to be member of DOSAAF (and the majority of the Soviet youth had to be Komsomol members, e.g., if they wanted to receive higher education). The membership fee for students was cheap (e.g., in 1960s-1970s it was 10 kopek).