Ysgol David Hughes is the largest Secondary School in Anglesey, Wales. It was founded in 1603, originally as a free Grammar School in Beaumaris. In 1963, with the local authority leading the way in introducing the comprehensive system, the school moved to Menai Bridge as a mixed comprehensive school.

The school is divided into five blocks, A-D and New Block. It has recently built a new sports hall with a fitness room with views of the Menai Strait and Snowdonia. The facility is open to the public in the evenings. There are approximately 1250 pupils at the school. The school has a large sports reputation and regularly competes against other schools in the area. The school is located at the top end of Menai Bridge and has views of both the Menai Suspension Bridge and Britannia Bridge. The school has excellent facilities with many classrooms having at least three PCs, every teacher has a laptop or PC and all classrooms have brand new electronic white boards. There are laboratories, kitchen and workshops as well as PC rooms in the school. The current headmaster is Dr. Brian Jones. 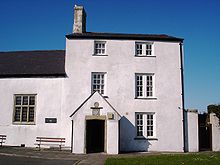 The former school building in Beaumaris, next to the castle. The 1603 date can be seen above the door

David Hughes (d. 1609), the founder of Beaumaris grammar school, was born in a stable of Llantrisant, Anglesey. He may have been the David Hughes of county Caernarvon, b. 1561, who entered Gray's Inn from Magdalen College, Oxford, 28 January 1583 (Foster, Alumni. Oxon.; Gray's Inn Admission Register, 28 Jan 1582-3), but another account of him, claiming to be based on sources not now available, suggests that he was born about 1536 and received no university education. Settling in Norfolk, he was appointed steward of the manor of Woodrising about 1596. In 1602 he established the Free Grammar School at Beaumaris. His will, dated 30 September 1609, endowed the school and made provision for the establishment of an almshouse at Llannerch-y-medd. The almshouse was actually built at Beaumaris and still stands today.

Ysgol David Hughes has recently been pursuing the BBC School Report programme, in which pupils are given a chance to develop their own news stories for a day. This years' entries were from a yr.8 welsh class and a yr.9 english class.