Civil Service F.C. is an English football club based in the city of London. The club originally played both association football and rugby football and the Civil Service, along with Blackheath F.C., is one of the two clubs that can claim to be a founder member of both the Football Association and the Rugby Football Union. However, the rugby club is now a distinct entity and appears to have been so since the late nineteenth century.

Two football codes at its foundation

In 1863 the newly formed Civil Service club was playing football under both Association and Rugby rules and sources suggest that the club was similar to Clapham Rovers in that it was a single club playing both codes.[1] At what point the Civil Service Rugby Club became a distinct entity from the Football Club (Association football) is unclear. Certainly, the histories published by the official Football and Rugby clubs respectively do not refer to a joint history past even 1863. However, the club was still a unified entity when it became a founding member of the Rugby Football Union in 1871[1], although notably it did not provide a member to the inaugural committee. However, in 1892 contemporary sources refer to Clapham Rovers as being unique in the respect that it played both codes, suggesting that the Civil Service had distinct teams by that point. 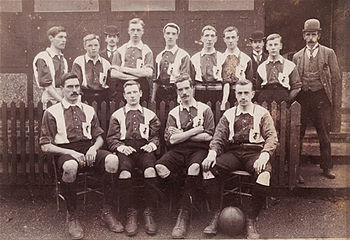 The Civil Service team of 1893

The club was one of the dozen founding sides of the Football Association on 28 October 1863, and lays claim to an earlier, but uncertain, date of origin. It was represented at the founder's meeting by Mr. Warne of the War Office, leading to the side often being identified as the War Office Club in historical accounts of the founding of the FA. Civil Service was also one of the fifteen entrants to the first ever FA Cup competition in 1871-72.

Several members of the Civil Service took a prominent role in organising the first representative matches between sides representing England and Scotland in 1870. The captain of the first Scottish XI was James Kirkpatrick (later Sir James Kirkpatrick, 8th Baronet)[2] who included fellow civil servants Charles and William Baillie-Hamilton and William Lindsay in the team, while the England XI included William C. Butler and Evelyn Freeth.[3][4][5]

Civil Service played a significant role in the introduction and popularization of the game of football in Europe early in the 1900s through touring, undertaking their first continental tour in 1901. In recognition of their contributions the club is an honorary life member of Real Madrid and Slavia Prague.

Early in the club's history the decision was taken to remain an amateur side in the face of the emergence of the professional game. Civil Service was subsequently active in the formation of several amateur leagues including the Amateur Football Alliance, the Isthmian League (1906), and the Southern Amateur Football League (1907).

CSFC enjoyed its greatest success in the years leading up to World War I with several wins in other cup competitions to its credit including the London Senior Cup (1901), the Middlesex Senior Cup (1908 and 1913), and the Amateur Football Association Cup (1910, and again later in 1920 and 1930). They also captured the Southern Amateur League title in 1913 and 1914. In later years club's accumulation of honours was modest with a SAL title in 1939 and two more league triumphs in 1969 and 1971.

More recently the club has seen the return of a greater measure of success. They captured the AFA Senior Cup in 1997 with a 4-3 win over Lensbury, securing the trophy for the first time in 67 years.

The 2010/11 season was a largely successful season for the club as it approaches it’s 150th anniversary. The 1st team narrowly missed out on promotion to the Southern Amateur League’s Division One; the second team won a rare cup double capturing the AFA Intermediate Cup and the AFA Middlesex Essex Cup while finishing strongly in Division One of the reserves league; the 3rd team was promoted back to the top flight and the 4th and 5th teams both had strong seasons while the lower sides continue to perform well in both League and Cup Competitions. The vets (over 35s) retained the London Financial Football Vets Cup.