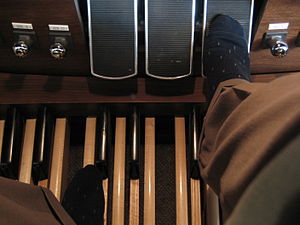 The earliest type of automatic crescendo device was the Rollschweller (German for "roll-sweller"), seen in large romantic organs of the nineteenth century, almost exclusively in Germany. It consists of a wheel and axle, which would be horizontally mounted directly above the pedalboard. When kicked forward by the organist, the wheel would spin forward on its axle, activating a mechanism that would add stops to the registration. Likewise, kicking the wheel in reverse would remove stops. The Rollschweller is constructed so that it may be kicked forward or backward indefinitely. This gives the device a much longer field of operation than the modern crescendo pedal, thus making the dynamic change more smooth and gradual. It is especially helpful and appropriate in the playing of the organ works of Max Reger, Franz Liszt, and Sigfrid Karg-Elert, who all wrote for organs that featured a Rollschweller.

As the use of electricity caught on in the twentieth century, organ builders began to apply it to their instruments, electrifying the key action and the stop action as well as the expression pedals. An electrically-operated crescendo pedal resembling an expression pedal was invented and mounted to the right of the expression pedals. The order in which the stops were activated by the crescendo pedal was set by the organ builder and could not be modified by the organist. This was the case until the later part of the twentieth century, when computerized devices were incorporated into console design, allowing greater customization of registration through more sophisticated combination actions. As a result, in organs with these devices, the stops controlled by the crescendo pedal are usually customizable, as is the order in which they are activated.

Reed organs and harmoniums of the late 19th and early 20th centuries often had a similar mechanism to a crescendo pedal. Since the player's feet were needed to pedal the bellows that provided the wind for the instrument, the mechanism was operated by a 'paddle' lever moved by one of the player's knees (the paddle being located under the keyboard). Usually this was called a 'full organ pedal', as it did not gradually engage ranks of stops in the manner of a true crescendo pedal, but simply engaged all the stops (and usually any octave couplers fitted to the instrument) when operated, with no progressive action.

Use of the crescendo pedal