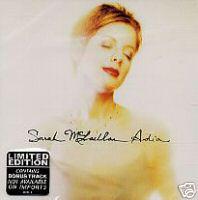 "Adia" is a that originally appeared on her 1997 album "Surfacing". It was co-written by McLachlan and her longtime producer, . The song reflected the apology to her best friend for becoming involved with, and later marrying, her friend's ex-partner. "Adia" was the third of four songs from "Surfacing" to be released as a single. It was her most successful US single, peaking at #3 on the . The single, released , contains four tracks: the radio mix of "Adia", the "Surfacing" mix of "Angel", the original studio version of "I Will Remember You" (as opposed to the live version included on the "Mirrorball" album, also released as a single), and a live version of "". [http://www.sarahmclachlan.com/discography/album.jsp?album_id=2107#]

A live version of "Adia" appears on the "Mirrorball" album.

McLachlan was nominated for Best Female Pop Vocal Performance at the for "Adia", losing to 's "". [http://theenvelope.latimes.com/extras/lostmind/year/1998/1998grammy.htm]

"Adia" has been covered by on . She said she used to cover it when she was 15.