Michiel Sweerts (29 September 1618–1664), also known as Michael Sweerts, was a Flemish painter of the Baroque period, active in Rome (1645–1656) in the style of the Bamboccianti. The Bamboccianti were known for depicting genre scenes of daily life, but Sweerts's contributions to this genre display greater stylistic mastery and social-philosophical sensitivity than many of his colleagues in this "school." Highly successful in Rome during his years there, Sweerts's reputation suffered a severe collapse not long after his death, lasting centuries; but thanks especially to the 2002 international monographic exhibition devoted entirely to him, Michael Sweerts: 1618-1664, he has begun once again to enjoy the esteem his work clearly merits.

Born in Brussels, he arrived in Rome in 1646[1], and rapidly moved into the circle of Flemish painters associated with Pieter van Laer (leader of the so-called Bamboccianti painters) and that resided near Santa Maria del Popolo. In 1647, he attended meetings of the Accademia di San Luca, although not as a member. Despite the fragmentary nature of evidence pertaining to his career in Rome and the post-mortem eclipse of his reputation, we know that Sweerts succeeded in creating for himself a sufficiently exalted reputation in the city so as to enter into the service of the ruling papal family itself, the Pamphilj, more specifically, Camillo Pamphilj, nephew of reigning Pope Innocent X who, at the encouragement of Camillo, bestowed upon Sweerts the papal title of Cavaliere di Cristo, the same honor enjoyed by the likes of Gian Lorenzo Bernini and Francesco Borromini.[2] Despite working in the highest echelons of papal patronage in Rome, sometime between 1652 and 1654, for reasons unknown Sweerts left the Eternal City and returned to the North, and by 1656, he had returned to Brussels, where he joined the painter's guild. He joined the Paris Foreign Missions Society as a lay brother and became a devout Christian. In 1658 he made the guild a self portrait as a farewell gift and moved to Amsterdam, where he would oversee the building of a ship for travel with the aforementioned Missions Étrangères to Palestine.[3] 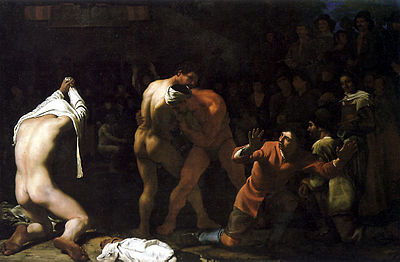 As a member of the Foreign Missions Society, he sailed east in 1661 from Marseille to Palestine with bishop Francois Pallu, 7 priests and another lay brother. Travelling to Aleppo (Syria), and from there to Isfahan via Tabriz (both in Persia), he was dismissed by the Society after causing too much trouble to those around him at the end of May 1662. He died two years later in Goa (India).

The surviving works by Sweerts, most of them dating to his residence in Rome, amount to about forty canvases. They can be broadly divided into two categories, scenes of the everyday, humble life of ordinary people (so-called "genre painting") and portraits of both known and unknown persons. Sweerts's genre scenes include several depicting artists at work in their studios or elsewhere and are thus valuable visual evidence for the work habits of seventeenth-century Roman artists. His pious series, The Seven Works of Mercy, also serves in effect as genre scenes, while illustrating for moral-didactic purposes the Christian corporal works of charity. In his portraits Sweerts proves himself a master as good as any of his best contemporaries in the field: his exquisite Head of a Woman of ca. 1654, now at the J. Paul Getty Museum in Los Angeles, is a noteworthy example of his ability to capture the lively and distinctive humanity of even his most humble, anonymous subjects.

In a class entirely by itself is Sweerts's monumental masterpiece of ca. 1652-54, Plague in An Ancient City, now in the Los Angeles County Museum of Art. Although not without its flaws, it is generally recognized as Sweerts's greatest work in terms not only of size, compositional complexity, and technical achievement, but also historical-archeological erudition. Hence Pierre Rosenberg (former director of the Louvre Museum of Paris) included it in his 2006 catalogue, Only in America: One Hundred Paintings in American Museums Unmatched in European Collections. A haunting, dramatic vision of the ravages of the bubonic plague, Sweerts's Plague in an Ancient City is clearly an attempt by the artist at proving his talent both in the depiction of a historical scene of epic proportions that encompasses a broad range of emotional-psychological states (the so-called affetti) and in imitation of the grand classicizing style of his older French contemporary and fellow-resident in Rome, Nicolas Poussin (1594-1665), one of the greatest masters of Baroque art. The precise subject and meaning of the work have long eluded art historians and other scholars, the general consensus being that the work was simply a generic depiction of the effects of the plague with no specific historical or moral or narrative meaning. That view has been overturned recently by the detailed visual and historical analysis of scholar Franco Mormando who has succeeded in deciphering the meaning of the canvas, both in terms of the specific historical plague therein represented and the probable intent (political-religious message) of the artist in recalling such a scene in mid-century Baroque Rome.[4] 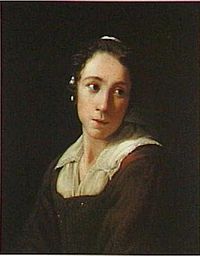 Portrait of a young woman, 1661, Mauritshuis.

Sweerts is an enigmatic and difficult artist to categorize, since he seems to have absorbed a variety of influences to create an eclectic hybrid that can be described as a Netherlandish genre adaptation of an early tenebrist styles: a blend of Vermeer's genre of painting and Caravaggio-influenced full bodied figures. His portrait of a young girl hangs near the girl with a pearl earring by Vermeer in the Mauritshuis.